A good old Czech meal, as it turns out. One of my all time favourites, too. 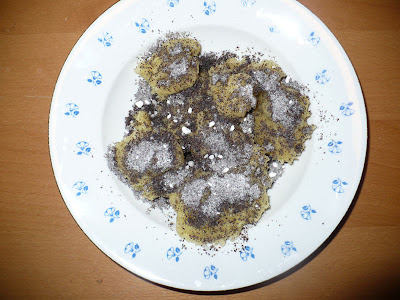 The cookbook is not exactly a 1930s cookbook. It's a 1991 reprint of a 1928 edition of a 1905 cookbook. But the number of reprints in itself suggests how popular it was, and I'm pretty sure many 1930s cooks used it - it was actually even translated into German, as this ad in one of the 1930s magazines I borrowed from my aunt proves! 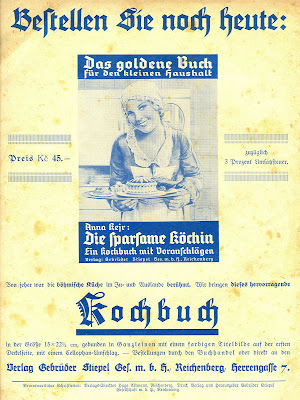 (This magazine actually seems to have been published in Czechoslovakia - in Reichenberg, which was the German name for the North Bohemian town Liberec. 1920s-30s Czechoslovakia was a multicultural country.)

In Czech, the cookbook is called Úsporná kuchařka: Zlatá kniha malé domácnosti ("Frugal Cookbook: The Golden Book of a Small Household") and it was written by Anuše Kejřová. It includes lots of tips, not just recipes; some of the tips are not of use for me anymore (I don't cook on an oven and do not have to be bothered with stoking it; neither does all of the storing advice apply to a modern household with a fridge and freezer). But some others sound very interesting, like the advice to use plum bones instead of almonds in some recipes...

And there are lots and lots of very interesting recipes; I was tempted by many of the desserts and soups and... but decided to go with an old favourite instead. Because it's so typically Czech! And also very true to the cookbook's promise of being frugal. It does not look very appetizing (my photo is also partly to blame), but trust me, it's delicious.

OK, so here's the recipe according to Anuše Kejřová - it's not quite a direct translation, mind you, but as close as I could come and make it understandable; my additions/comments are highlighted in blue. It should be for 4 or 5 people, like all of the recipes in the book.

Peel potatoes - about 1 kg - cut in half and boil in a pot (2,5 l pot, but it should not be full). Put into boiling water, salted with a tablespoon of salt. Before they cook fully (but they should not be raw), pour away some of the water (keep it for now). Add "a saucer" (I'd eyeball it) of white flour (fine wheat flour?), mix a bit with the other side of a wooden spoon so that the flour gets between the potatoes. Keep on (very) low heat for about 15 minutes. If it's too thick, add some of the remaining water, and blend with a wooden spoon into a fine mash (eventually you can use a potato masher if you have something like that, but the wooden spoon works just fine). (The remaining water can be used in a soup or for making a stock.) If the mash is too thin, it sticks to your teeth and is not very tasty. When you have blended it well, cut it out with a tablespoon doused in melted fat (butter, lard - I like it with lard; you can sort of see what is meant by "cutting it out" on the photo) and put into a bowl. Top with shredded quark (the hard kind; this might be too culturally specific for you English-speaking readers, though) and grease with butter. You can also top it with ground poppy seeds with sugar and grease with lard. (My favourite option) If there are some left, you can fry them and eat as a savoury variant, use as a side dish with meat or a stew.

So those are the traditional variants. I think no one can blame you if you grease it with butter and top with poppy, or do something completely different with it. :-) Just don't leave out the grease when cutting it out: that's what keeps it from sticking to the spoon! The savoury variant is very tasty, too - just fry it and top with salt, nom.
Oh, and if you do the poppy variant, pair it with a good mug of milk! :-)