... by tracing. Bonny Blue designed clever kits of printed designs that you can trace and combine and colour out and, simply, play dress-up on paper with.
It's something I would have totally loved as a child. I still love it, only I'm not so much into 1860s. I mean, I am into them, the way I'm into almost all historical fashions, but I'm not into them enough to really really want this. I'd rather love the Regency kit that's coming next.
But if you are interested in 1860s fashions badly enough, and manage to read this before Saturday June 26th (not much time left, I know), you can even win one of the clever kits in a giveaway.
Vystavil Hana - Marmota v 18:34 No comments:

Still working on the chemise. It still seems the French seaming will work.

I decided against lining the Regency dress. Instead, I'll wear a bodiced petticoat underneath if necessary. I feel that a lined dress would be a bother to wear in summer, and that would defy the point in using Indian cotton (= saree). Which I do not want to defy.

Also, I wanted to get rid of some fabric (particularly, a friend wanted to get rid of some fabric) and helped organise a collection of fabric for charity.
I should have known better. I ended up taking some of the fabric home, and of course there was much more of it than I got rid of.
The moral of the story: When you have the sewing bug, it's no use trying to get rid of fabric. Your stash always multiplies.
The good thing is, I got rid of fabric I wasn't likely to use, and brought home fabric I'm more likely to use, colour-wise and type-wise. Except for a Very Pink Poplin of a "What was I thinking?" kind. (I actually know what I was thinking. It's just that what I was thinking doesn't explain what I'm going to do with the whole length of it.) 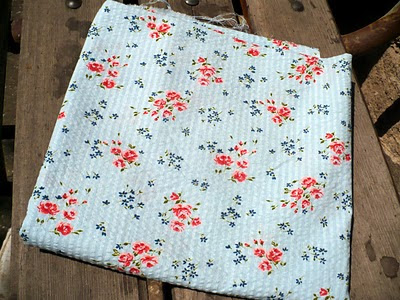 Which begged me to become another incarnation of my Andrea Blouse pattern.

And I went downhill from there. You know how that goes, don't you? 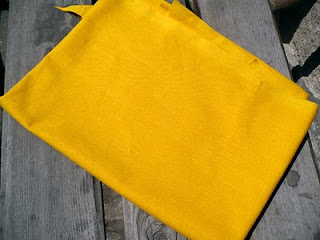 Yellow plainweave cotton, destined to become something in our kitchen. 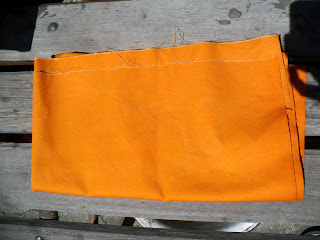 Thick orange cotton canvas, destined to become a shoulder bag, if I can figure that out. 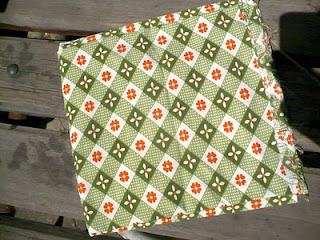 A square piece of lovely vintage-y print which will, hopefully, with some careful planning become a summer skirt. 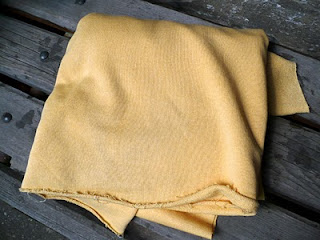 A pretty yellow sweatshirting which I wanted to turn into a clone of my favourite hoodie, except that it has less body to it and is more... um... it pulls more, if that makes sense.
I also have some blue-grey sweatshirting and some dark blue, but there's just that amount of solid colour sweatshirting you could bear to see, I think. Those blue ones are "firmer" than the yellow one, so perhaps I'll use one of those for the hoodie clone in the end. 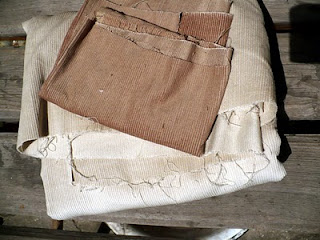 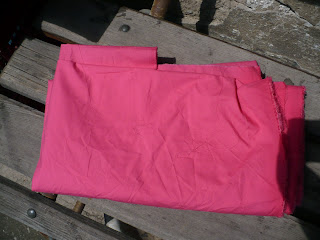 The Very Pink Poplin Of Doom. The thing I was thinking was that this would make lovely piping for the flowered seersucker Andrea. Except that after that is done I'll still be left with about 2 metres of Very Pink Poplin.
If I were a bold-statement-kind-of-person, I'd sew a Very Pink Duster out of it and call it ironic. But my irony is usually much more subtle (like, I have an idea of making a polka-dotted babydoll-y dress in Regency style, grande-aissettes and all - see my point?), so that would not work for me. Not to mention that a proper duster of OUATITW type would probably require more fabric.
So, until next post, I'm left with a Very Pink Poplin Of Doom. The next post will feature some real treasures, to defeat the Doom of the Very Pink Poplin.
Vystavil Hana - Marmota v 13:01 4 comments:

The makings of a chemise

Anyway, this was the state of affairs yesterday morning: 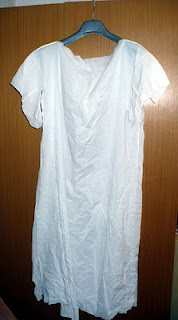 Maybe - I guess so - French seams are not period for Regency, and even less period for Middle Age (which is the other eventual use for this chemise; namely the year 1437), but I'm not only going for accuracy (nobody's going to judge my undergarments anyway, only me), I'm also going for convenience, and this is very convenient. And very pretty. My French seams are tiny and unobtrusive. I feel accomplished.

I also keep feeling like a heroine out of Božena Němcová's books. When I started sewing it - with the shoulder seams - I kept thinking of the fairy tale "Seven Ravens", where the heroine had to save her seven brothers from an enchantment by sewing shirts for them (with other details to the technique that do not matter now) - she did, but couldn't finish the last seven or nine or so stitches on the youngest brother's shirt, so he had some feathers left on his shoulder.
I still keep being reminded of Němcová, so I also read some of her letters. More on that later, perhaps.
Vystavil Hana - Marmota v 10:15 7 comments:

Going to work on my chemise

I could have gone biking today, maybe.
Or picking elderflowers and make elderflower syrup.
But it's raining.

So, instead, I'll sit down, watch the film about apostle Paul that I got recorded by someone from TV, on a videotape, in an awful quality, many years ago, and keep working on my chemise.

That's the plan, anyway. Going to cut out and sew the side gores.

The film's not very good in my opinion, but that only makes it the perfect background for my sewing. I've normally been watching MASH or Alarm für Cobra 11 in such circumstances recently. You know, something I do not have to watch all the time, just listen. The quality of the image in this one is awful (TV, to videotape, to DVD years later - you get the idea), so I don't have to watch it very much either... Still, I feel like watching it today. Or, rather, listening to it. (If you're wondering, I'm sewing it by hand. That's why I can watch a film while working on it.)

I'm making the chemise from the new batiste (or what it is). It turned out to be the perfect amount of fabric for it, and there were some flaws (ah, cheap fabric...). So I saw no need to cut into my older, nicer batch of batiste for something that gets worn underneath other clothes anyway.
Vystavil Hana - Marmota v 12:15 2 comments: