This is the page where I share things, and links to things/sources I've found helpful or think could be helpful for someone else, especially if they seem to be less widely known and referred to in the online historical costuming community. Especially books and magazines.


The eras covered on this page, broken down partially based on what eras I look more closely into myself:

"L'art du brodeur" by Charles Germain du Saint-Aubin, 1770 - embroidery instruction book with tutorial pictures. Includes three border designs from the year of publication, and one each from 1730, 1747 and 1768.


"The Hüpsch Costume Collection in the Hessisches Landesmuseum Darmstadt" dissertation by Johannes Pietsch - in German; contains patterns, descriptions and photos of a number of extant pieces, mostly bodices and jackets, mostly but not only from the 17th century.


"Folio of embroidery designs" - dated to 1800; I suspect it might be earlier, and is much more likely comprised of designs for weaving brocade fabric rather than embroidery. And interesting as such.


Once again, "The Hüpsch Costume Collection in the Hessisches Landesmuseum Darmstadt" - there is also a 1790s spencer jacket, with a deep neckline, long sleeves, and narrow back with tails.

"Wasch- Bleich- Platt- und Nach-Buch, zum Selbstunterricht für Damen (etc.)" by Johann Friedrich Netto, 1796 - embroidery patterns, including the alphabet & numbers and a finished sampler of the same (it comes first in the scanned book, don't mistake it for the pattern).

"The Taylor's Instructor" by James Queen and William Lapsley, Philadelphia 1809. A book on cutting / pattern-making for tailors; includes cutting diagrams, also one for a lady's habit (riding habit, which the book says can also be used as a walking costume).

De Gracieuse - Dutch magazine from between 1862 and 1936. Includes pattern sheets (at a quick glance, at least with some of the issues throughout the history).

Bazar - what I believe is a Czech version of the international magazine you may be familiar with from other iterations (see above). Available from Národní knihovna and Moravská zemská knihovna in the 1869-1972 time range, in the Czech Digitální knihovna web interface. Includes pattern supplements, including corsets!

Digitální knihovna keeps changing its interface. As of early 2021, the option to download a PDF (in "limited runs" of a given number of pages at a time - it seems to change, depending perhaps on how busy the servers are) or a hi-res image of current page should appear in a bar on the left hand side.

Wiener Moden Zeitung - 1862-63, simple fashion magazine with pattern sheets with some large patterns and more in the apportioning scales style - scanned in pieces

Trims and edgings, 1875 - sample book of "Embroideries for night shirts". All of them white ribbon with colour designs.

Evropské mody -  periodical of Czech tailors. In the 1882-1887 timerange it includes fashion plates and pattern drafts - usually male garments, but some women, too. The descriptions are hidden somewhere inside under the title "Střihová příloha" (in Czech, of course); the pattern drafts usually don't correspond to the plates because while the plates were ones they received from Paris, the drafts were of local provenance. There's usually one larger draft and then several smaller ones. Possibly from the second issue of 1882 onward, definitely from the third one onward, the drafts are usually of the apportioning scales type.
From 1888 onward, the magazine is much shorter, more of a leaflet, and there are no supplements anymore.


Nové mody - apparently a WWI-era re-branding of the same magazine? Available from Národní knihovna for 1916-1919 and Moravská zemská knihovna for 1917-1919. (ETA 2021: Unfortunately MZK has now made all their issues of these pattern magazines unavailable.)

Album de Blouses "Le Chic" Paris / Wiener Blusenmodelle / Letzte Blusenneuheiten / Album Blouses Parisiennes / Album Blouses Nouvelles / whatever other title may be hiding in there - 1908-1933. Despite the names, it's not just blouses but also some dresses / entire outfits.


Nové pařížské módy - the abovementioned Czech fashion magazine, from 1919 onward. Not all of the issues are there, not all of the pattern supplements are there, and some of the pattern supplements are listed separately from their parent issues. BUT it's a great overview of interwar fashions, PLUS patterns
(The patterns seem to be resized, at least in some of the early issues. In later issues, the garments marked with a star ought to have patterns included in the supplements.)
De Gracieuse - Dutch magazine from between 1962 and 1936. Includes pattern sheets (at a quick glance, at least with some of the issues throughout the history).
Blatt der Hausfrau - German magazine, many volumes include pattern sheets
Illustrierte Wäsche-Zeitung - 1894-1919, plus 1927-28. "Wäsche" = household linen, underwear & simple washable clothes. Pattern sheets (the oldest ones are unfortunately scanned folded, probably because they were too fragile).
Der Bazar
Beaux Arts des Modes - albums of fashion illustrations 1920-1942. The 1942 issues are instead titled "Das Goldene Buch".
Album de Blouses "Le Chic" Paris / Wiener Blusenmodelle / Letzte Blusenneuheiten / Album Blouses Parisiennes / Album Blouses Nouvelles / whatever other title may be hiding in there - 1908-1933. Despite the names, it's not just blouses but also some dresses / entire outfits.
Die Grosse Schneiderkunst / Le Grand Tailleur - fashion plates for tailored garments, in some cases even with a simplified pattern overview. 1924-1943
Perfekte Mode (Wiener Perfekt Mode) - 1926-1940 pattern catalogues (so no pattern sheets)
Wiener Modenzeitung - 1932-1942 - same case as above
Die Mode der Eleganter Frau - fashion plate magazine from 1927-1942
Die Bühne - Austrian lifestyle magazine including fashion, 1924-1950
Wiener Hausfrau - 1904-1939 - typical women's magazine
Frisierkunst der Mode (later "Internationale Frisierkunst und Schönheitspflege") - magazine for hairstyles (and make-up), 1919-1937 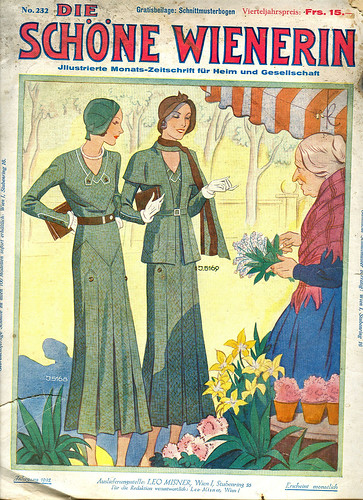 Some of them are Austrian, most of them German. There is also one that was published in Liberec (Reichenberg) in the then Czechoslovakia, which had a predominantly German population at the time. They came from the stash of a seamstress lady in Svitavy (Zwittau; my aunt got them from her husband after her death), and at least one of them, if I recall, seems to have come from a bookseller in Brno (Brünn).
Also, as noted above, I have now found online issues of a Czech magazine called "Nové pařížské módy" ("New Parisian Fashions") which uses the same illustrations the above issue of "Die Schöne Wienerin" uses. From this c. 1920 issue, it seems they drew them from a French magazine called La Femme élégante, which at the beginning they did not even always translate? Except Google finds nothing about that, so who knows. (ETA: I (re-)found this blog post about one issue of it, and here.)
I give this background, because it helps me to illustrate how these fashions would have travelled in Central Europe at the time.


The 1942 book Modern Pattern Design by Harriet Pepin on Archive.org