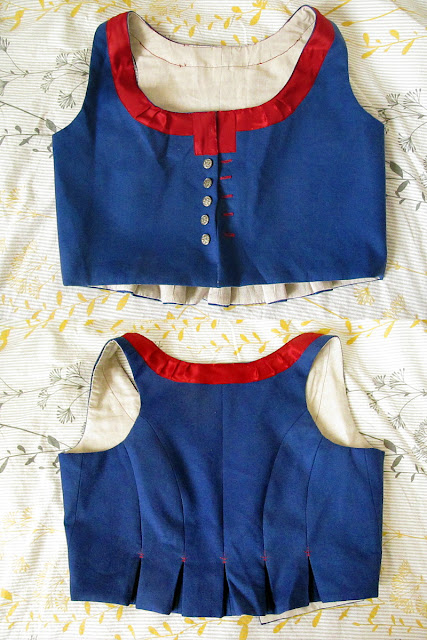 What the item is: Moravian-Wallachian bodice for my sister

What is the unexpected feature? The colour blue. These days, the typical Moravian-Wallachian folk costume bodice is red (usually with green or gold trimmings). But in my research, I found out that's actually only a c. mid-19th century development; before that, red dye was more expensive and red bodices were only worn by well-off women, and for special occasions. One of the colours more common historically was blue, and as we hacked out the ideas for her costume with my sister, we found out she really liked the earlier version of it.
(Also, strikingly, it unfortunately came out much darker and brighter than expected - my inexperience with that brand of dye shows. :P I did use about 1/3 recommended amount as per Jacquard's instructions for "most saturated results", but apparently I should have used much less... :-( )
Here are two modern reconstructions of blue bodices in Moravian Wallachia in the beginning of the 19th century that were our primary inspiration for this - and show the sort of colour I was actually aiming at. :P The first also shows an extant picture - originally published in a book I unfortunately don't own.

Material: For the outer, overdyed cream wool worsted (a sort of brushed twill?) strengthened with woven cotton iron-on interfacing to roughly imitate wool broadcloth with my resources. Lining is a cotton-linen blend I bought in Ikea about ten years ago.

Notions: Dark red polyester satin ribbon for trim (sewed on with wrong side out to lessen the shine). Blue cotton thread for machine-sewing the outer, white cotton thread for machine-sewing the lining, white linen thread for handsewing the lining in, dark red silk thread for sewing on the trim. Blue linen buttonhole twist for sewing on the buttons. Dark red silk buttonhole twist for buttonholes & the embroidery in the back. (All links to Sartor, because they ship all over the place and I'm pretty sure they carry the same brands I used; but I only bought the linen thread there myself.) Metallic filligree shank buttons. (The plan is also to add hooks and eyes in case her figure changes, but I haven't gotten around to that yet.)

Pattern: My own, based on lots of Wallachian bodices viewed online, most of them not extant. Derived loosely from the basic bodice & princess seam tutorials by Bilikis Signatures on YouTube, because her simplified drafting methods struck me as a good starting point for a more rural garment; but I drafted front & back separately, because my sister is very busty. Then tweaked in mock-up.

(The centre front is actually cut on grain.)

How historically accurate is it? About 50/50, I guess. Colour came out a tad too chemical. Material is mehish, though not too bad for our budget constraints & what's readily available (I'm not happy about the polyester trim, but the rest works quite well). Pattern is an educated guess. Machine sewing on seams & straighter bits of trim to speed it up. Aside from that, the construction method is plausible but not documented, and I think I made some mistakes because I was figuring it out as I went. I am not certain about the embroidery in the back, its existence is also a bit of an educated guess - I couldn't find any back pictures of extant bodices or historical depictions from the back; current bodices mostly have pom-pom-like decoration there but there are also some embroidered ones, and my sister wanted her bodice as smooth as possible.

The folds were, at first, delightfully neat - sew vertical seams, clip into seam allowance, fold, stitch seam allowance at the top of fold without stitching through to the outside, press. 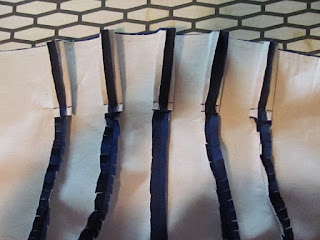 The outer and the lining were sewn separately - I pleated the folds in the opposite diretion on the lining, without sewing down the top, and then I pressed the edges down and fell-stitched the lining in. This created a problem with the folds, however, in part because I had done a stupid and embroidered over them before I sewed in the lining - so it was even messier than it would have been anyway. (I've forgotten that I still want to sew pieces of fabric over the top inside to clean it up and secure it... see below how rather messy it is at the moment.) 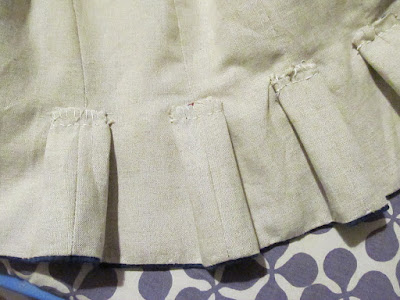 The embroidery, though, makes me quite happy despite. I stitched tight triangles of overlapping stitches right above the folds to secure them, and then did a little decorative embroidery above it, in a bit of a spruce-branch pattern (or chicken feet, depending on how you look at it...) to echo the embroidery of spruce branches my sister made for her shirt. 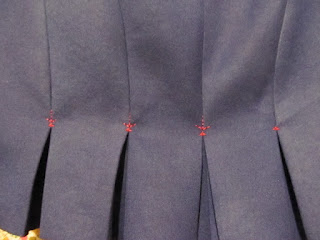 (Callback to that post: As you can see now, I didn't interface this with downproof ticking in the end.)


Hours to complete: About 2 days for fabric dyeing & pattern creation & prep, about 3 days of rather intense sewing.

First worn: Not yet. It was meant to be worn at the final promenade at the Prague Folklore Days in July with the rest of her costume, but it was too hot for it so the bodice was left off. (She works as a guide for foreign dance ensembles almost every year and wanted to finally join in in her own folk costume.)

Total cost: I got the wool as a super-discouted remnant with holes and smudges at work, so this amount came at c. 30 CZK! The lining fabric was bought ages ago but I'm guessing it would have been around 80 CZK per metre (it's very narrow). Can't remember exactly how much the notions were - let's say also c. 80 CZK for the interfacing, c. 30 CZK for ribbon, 100 CZK for buttons (bought from a seller online), about 30 CZK for negligible amounts of thread, most of the cost being the linen and the silk? About 180 CZK for dye + shipping (my sister bought that, so I'm not entirely sure, either). So a bit over 500 CZK all together? Because of my extreme employee discount, mocking up broadcloth still came out considerably cheaper than actual broadcloth, which starts somewhere around 500 CZK per metre...

I discovered Bilikis a couple months ago through a YouTube recommendation when I started watching more crafting / historical videos on YouTube. I really like her demonstrative explanations, although some of her methods are not up to scratch if you're used to modern Western sewing methods. (Others, though, on the other hand offer some simple insights especially for a historical seamstress that modern Western drafting methods overcomplicate, so it balances out.) First thing I noticed is - that folded almost-symmetrical drafting method may create problems for busty ladies.

(She decided to wear her corset underneath her costume, which isn't exactly accurate but makes her a lot more comfortable, as a very busty lady.)

I also, initially, took away width in the front both at the sides and at the centre, creating a sort of trapezoidal shape; after I made a mock-up and found out there was length missing at the front and a bit of width missing in the bust (I think I underestimated my ease in that area), conveniently missing exactly where I stopped my angled "dart" in the front centre so I could just add it along that line - I rotated the pattern piece to put the centre front on grain and added length both on top to widen it there, and on the bottom to account for the missing length that her bust ate up, i.e., I lengthened the front to the point where the new hemline formed a right angle with the front. 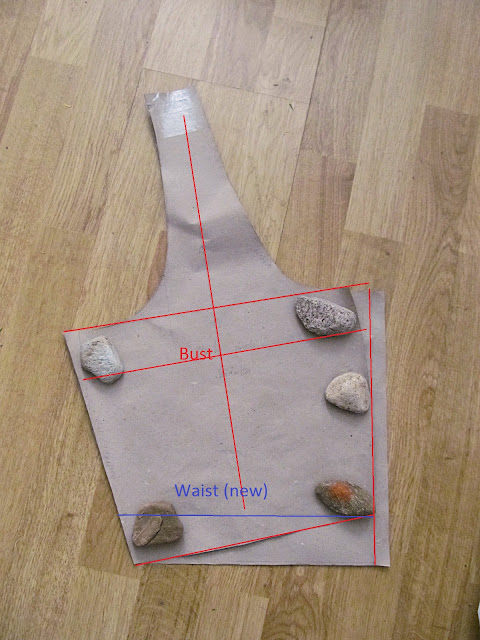 Which was completely intuited, but may actually be a pretty good method to deal with that front length shortage due to bust while keeping the same side length as the back? I'd have to think more on that. Generally, I think I'll have to give more thought to this drafting method as relates to various historical patterns - it's a really neat starting point.

Because I had two princess seams in the back, I think I used smaller measurements for my darts than Bilikis uses in her tutorial. I had to take them in a little during mock-up after all, and generally had to balance the back a little - taking width from the centre and adding it on the other side of the pattern piece only at the waist, which I think had more to do with my sister's specific build (she's pretty sway-back-y) than the drafting method as such - the exact sort of thing mock-ups are for.

I also had to cut into the armscye considerably in the front - mostly because it's a sleeveless bodice, I think. And to adjust the shoulder slope - my sister has very mid-19th century shoulders! (The picture above already features these two adjustments.)

Oh, and I moved the shoulder seam very slightly to the back - which you can see with my abundance of cellotape in the pattern above. Now I think about it, with my aim date, maybe I could have moved them even further? But it would have messed with the neckline and my aim for a pattern that's as simple as possible.

Aside from the fabulous tip to rotate the thread couter-clockwise, it was especially the tip on focusing more on keeping them even than at keeping them tightly packed that came really helpful. I just somehow completely forgot about the cording... 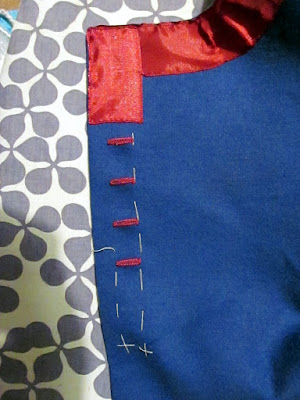 Here four of them finished, with some of the basting already taken out. I originally planned on doing six of them, but then decided only five looked more balanced.

Not bad at all for someone who's mostly managed to avoid buttons for fifteen years of sewing! Definitely all thanks to Stuart Lillie's tutorials. (Okay, and maybe also my general ability to handsew surprisingly neatly, and the power of handbasting stuff - a little more work that saves you a lot of trouble in the long run!)

This is a placeholder where I may share the finished pattern one day, to make life easier for other busty ladies out there.

P.S. I've introduced a new tag, "Mess of making", which will be strategically placed at posts of particular importance to the truth of occasional sewing fails, messy insides and shortcuts taken. What with sewists online recently often bringing up how discouraging it can be when everyone keeps showing only picture-perfect finished makes, and how helpful it is to see others make mistakes, too: here there be my mess of making, as promised in the very beginning of this blog. I'm not going to show you the mess that's my room, but I do promise you I won't, ever, stick to picture-perfect finished projects only. After all, my love of sewing is just as much if not even more for the learning process as it is for the ability to make pretty clothes. :-)
Vystavil Hana - Marmota v 15:45 No comments: