Have a good one

I think I'm obliged to post something here before 2013 is over. It was a somewhat awkward year in many respects, with many things left unfinished (as evidenced by the lack of posts here), and things going differently than expected (like our Christmas; but it was still good!). But it wasn't a bad one. In spite of various things going wrong, the last straw being my aunt calling this morning that the flat at school was most probably flooded, there were lots of good things happening, too. The last, so far, being my aunt calling again that the flooding isn't too bad at all.

Sometimes, I can take lessons from our cats. Seriously.

A Kuusi lesson: when something does not go as planned, make the best of it and go on as if that was the purpose. Because who knows, maybe it was.
(If you do not catch the bird in the tree, make yourself comfortable in the tree and pretend that was the plan all along.) 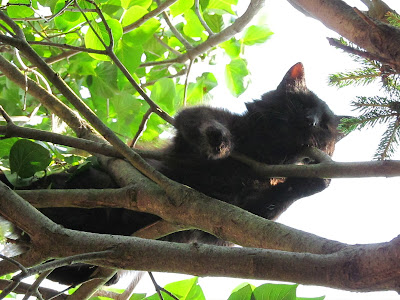 I had some great times this year, and in spite of once again not managing to meet with lots of friends I have not seen in ages, I think 2013 was a very friend-rich year for me; I will get around to writing about some of it one day. So for the next year, I wish you some great times, good friends to have them with, and the capacity of making the best of the less so.