I bring you another instalment of Deciphering Historical Clothes, once again utilising the treasures to be found on esbirky.cz; namely this very lovely cca 1790 jacket from Severočeské muzeum v Liberci (Museum of Northern Bohemia in Liberec), inventory number T05316: 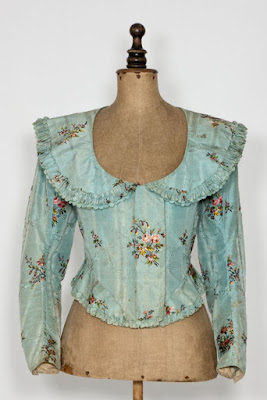 The description given goes: "Classicist ladies' jacket sewn by hand from a light blue silk fabric with a woven pattern of vertical stripes and brocaded stylised colourful bouquets. The jacket with a deep round neckline and large collar closes in the front with six hooks covered with a placket (I assume). The collar and bottom hem are trimmed with pleated ruffles. Long narrow sleeves close with one fabric covered button. The jacket is boned with baleen and lined in linen, the collar, peplum and placket are lined in waxed cloth." 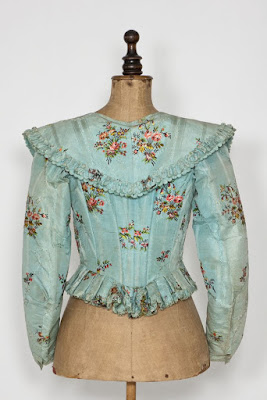 It also says it's 50 cm long; I wonder if that includes the sleeves. It does seem to fit pretty much at the natural waist, with the points in the front and the back (and the peplum) running a bit lower. I cannot tell for sure from the pictures where the boning is, but I think it's at least at centre back.

There are several reasons why I chose to go with this jacket for my next instalment. One, I just love it (such gorgeous fabric! and such neat pattern placement). Two, there's both a back and front view and the very nice detailed description that gives us details we can't see in the pictures. Three, once again, the pattern allows me to see the grainlines. Four, I think I can provide you with starting points if you wanted to recreate it!
(Why yes, it's entered my long list of things to make one day if I find the right fabric; I think it is, so far, the most saccharine item to be awarded that distinction. Now I'm imagining a fluffy pink petticoat and wondering what's happened to me.)

Let's start with the colour-coding: 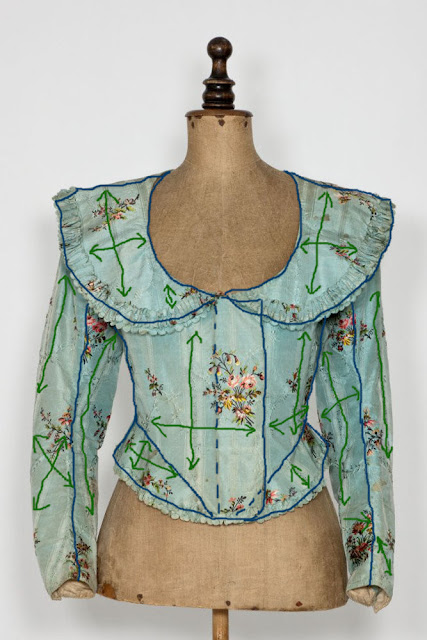 I went a bit overboard with the grainlines; mostly to help you visualise the curves in the pattern pieces. I believe, as marked in blue, that there are seams at the shoulders in the collar - or at least on the right shoulder: if you look closely, you'll see that the bouquets go in opposite directions and the stripes don't align perfectly in the front and in the back there. Having a seam at the shoulder would serve the purpose piecing often did: you would not have to lay a large oddly-shaped pattern piece on your fabric in one piece. I have not noticed any obvious piecing in the jacket and I think the number of pattern pieces as is definitely helps with that.
I am not sure if there are side seams under the arms or not: I can't wrap my mind around the grainlines/pattern there... It seems to me it doesn't align, going up into a chevron pattern rather than wrapping around - meaning a seam; but I am not sure.
There's a smudge in the centre front on the front piece; I am assuming that's where the left side of the jacket ends underneath, possibly strengthened with a bone. The right side flaps over. 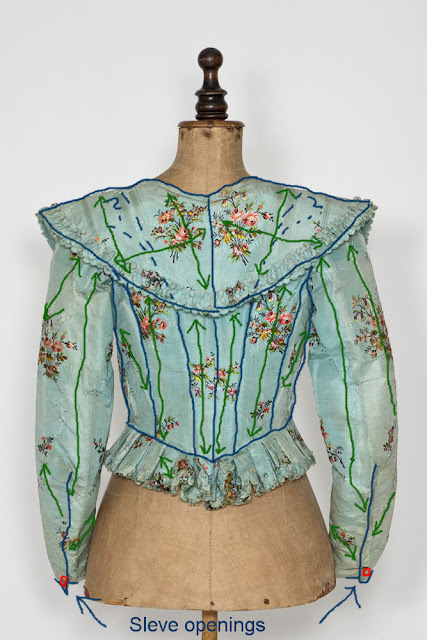 As you can see at the shoulders, I'm not sure how the seamlines would continue under the collar and I am proposing two options.
The sleeves don't have a seam running down all the length in the back; I link below to a blog post with a sleve pattern I believe to be very similar to what's going on here. Note: The grainline in the top of the left sleeve is mistaken; it should run more vertically. There are sleeve openings, closing with a single covered button as noted in the description (marked red). The opening is likely there because the sleeves are very narrow. They appear to be about 3/4 - 7/8 length.
It's nearly impossible to tell the grainlines in the pleated peplum, but I seem to see grainlines running on the bias to the pleats. It would probably allow the peplum to sit more smoothly around the curves of the jacket and body if that's the case. The jacket would have been worn with a bumpad or something like that underneath, which would likely make the pleats at the centre back stick out and look less crushed.

Now here's about the making: Katherine-Koshka has made a similar jacket, here. She says she's going to make a tutorial, but she has not published it yet. However, she has made a tutorial for the other jacket in that post, which includes a sleeve shape I believe to be very similar to the sleeve here. She has also made a redingote with a similarly lying collar, which she writes about here, including pictures of the collar pieces laid flat. The collar of the Liberec jacket would have a seam at the centre back at the least, would not have a notch and would taper towards the centre front more smoothly; but the method of construction would be similar. And she owns an antique 1790s jacket that's shaped differently at the waist, but probably features very similar construction methods: notice the overlap in the front, the use of different linings, the seaming in the sleeves. I wouldn't be surprised if the hooks and eyes in the Liberec jacket were a later addition and if it had originally also pinned shut.

I think you could Frankenstein it from any reasonably similar 18th century fitted bodice pattern. Like Nehelenia Patterns' 1790s jacket or 1790s Redingote (or maybe other patterns as well), Sense & Sensibility's 1780s Ladies' Portrait Dress pattern (which would require raising the neckline in the back), or the bodice of this Danish Robe Piemontaise (where you'd have to separate the front from the side back pieces, but otherwise the basic lines seem very similar). Being the natural-born pattern Frankensteiner that I am, I am in the process of designing a 1790s-style jacket pattern from the 1848 jacket pattern: some slashing and re-taping in the back to change the number of pattern pieces, cut off material from the shoulders, ignore the darts and add material to the centre front, round out the neckline, and you've got something very similar to this. (Of course, I'm going to need a different sleeve pattern.) For the collar, you can follow the principles of Peter Pan collar drafting and just change the shape.
Vystavil Hana - Marmota v 19:35 6 comments: