Dačice is (are, in Czech) a town historically in Moravia, but it's near the border; also near the border with Austria. It's a bit out of hand, so going on a trip there was a special occasion; for several reasons.

I fell in love with Dačice, hard. The same way I fell hard for Tartu (which I still owe you photos of). Dačice are a world apart from lots of other places in the Czech Republic.

A fairly typical country railway station. There are two stations in Dačice; this is Dačice - město (Dačice - town). From here, you cross a river and you enter the town just some two blocks below the town square.

A bookshop I did not have the time to enter, but which I would have loved to enter (and leave with books). The old sign above says "Bookshop - records". I don't think they sell vinyl records anymore; probably no records at all. Still, they have that sign.

The town square's busy, but not in a bad way. It looks like the real centre of the life in the town. People sitting on benches and eating ice cream (later, me and my sister sat in a candy shop at this side of the square and had two ice creams each). And the shops seemed like the kind of shops a small town needs.

And they clearly take care of their flowers.

This is the old town hall, with a sundial in front of it.

There's a special world-changing (in a small way) event in the history of Dačice, commemorated with sculptures on several places. I'll get to that later...

More Art Nouveau. Buildings like this one house expensive boutiques in Prague; here, it's a tea house.

Side of the tower of the St Lawrence church.

And front. The church was founded in 1183; the current building is from 1775-1788, the tower is from 1586-1592. My sister informed me that the tower is in the Mannerism style, and that there are other similar towers in the style scattered over the Czech Republic. So when you see one like this here, you'll know. (From the top of my head, I can remember the town hall in Havlíčkův Brod has the same style of tower.)

There. Choose your favourite language!

I'd place this house somewhere in the 1920s or 30s; now there's the police in it. But look, painted panel doors!

And once more, on an older house next door.

These sit just across the street from the chateau of Dačice, which was our main destination - more posts to come. Let's go see more of the town for now.

More painted panel doors! Back at the town square.

A look over the town square towards the river side of the town (east).

Once more, the sundial.

The old chateau (in a narrow street, thus difficult to photograph).

And a mysterious tower-like building that would seem to have something to do with the brewery, only it is a bit further away.

The last thing I photographed in Dačice was this apartment building, fairly unique in its own right.

This isn't unique; this is fairly typical. But the lighting was fine.
The Kostelec u Jihlavy railway station, where we changed trains; it seems to be in the middle of nowhere. Just wet meadows on one side and fields on the other.

And a jungle of tansy and raspberry bushes; and wood.
Vystavil Hana - Marmota v 13:05 2 comments:

This outfit's nothing special, mostly utilitarian (that sounds funny). Other than showing my new hat in action with the matching tote... The hat does not look so particularly good with the bun in some of my photos. Nor do the colours match. That's the utilitarian part. Monday was the hottest day since recording started in Czechia. (I kind of ruined my feet. And I woke up with a splitting headache the next day. Half a Paralen and about 3 liters of liquids later, I feel better, though.)

This dress is one of my few green pieces of clothing. I LOVE this *exact* shade of green. I love it on this dress. It's such a subversive pop of colour. ("Look, what a bright colour!" - "But it's only green!" - Um, does that make any sense at all?)

I also love the cut of it. Almost; I think a slightly fuller skirt (at the bottom) might be better. But: surplice bodice + tulip sleeves? And the yoke with the gathers in the back? Yum.

I love the fabric. It's a loose weave cotton with a slight crease; light and airy for summer, yet crisp enough for the style.

I do not love the unwashable dark spots on the skirt (small, so not seen on the photos, but noticable enough in real life).

I do not love the fit on me. It's too tight in the bust, which leads to two unfortunate results: a) the neckline is wobbly, b) the fit is uneven: it sits higher in the front than in the back. 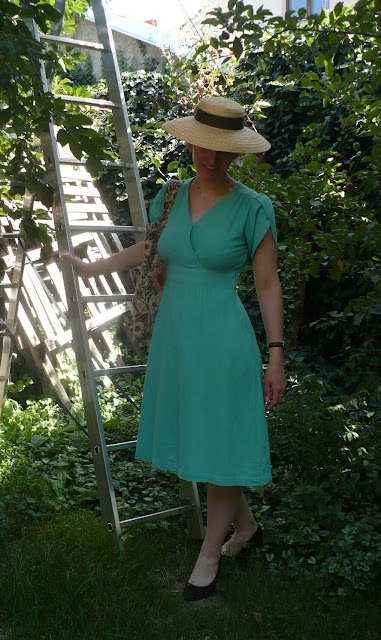 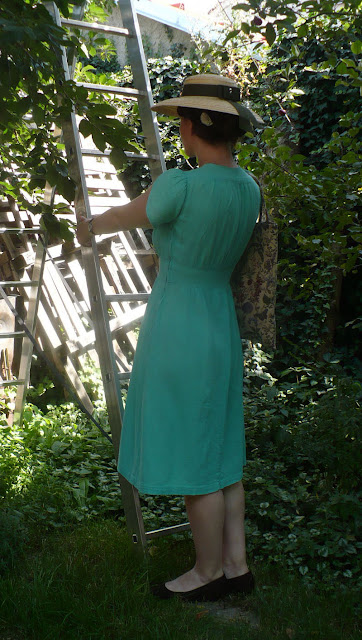 Therein lie my problems. I'd love to recreate the dress, with a better fit. But I want to recreate it in the exact. same. fabric. The exact. same. colour. And where am I going to get that? I have no idea where the dress came from or how old it is. Fairly old. (The style is something like 70s meets 40s, but the notions used - plastic zipper of the tiny kind and fusible interfacing - probably place it in later times than 40s; who knows, maybe it's just early 90s.) It seems to be homesewn; but it was not sewn in this household.

Oh, and if I ever make it, I want it to be better finished inside. The interfaced waistband is not lined/underlined, and the interfacing is pretty worn-out. Eugh.

So that's it. One of those - not really RTW, but almost - pieces I want to recreate and replace (see the new blog button on the right). But I do not know how to do that and fulfill my wishes for it. This piece cannot simply be recreated for function; I also want it to be recreated for style. And vice versa. I want those two to be in harmony: the dress as it is comes near, but unfortunately not quite on me.
Vystavil Hana - Marmota v 00:41 7 comments:

Favourite, because they're a lovely soft narrow-vale corduroy that makes them suitable both for summer, unless it's really hot, and spring and autumn. White, wide trousers make for a very classic look, I think. I snatched them on one of the clothes exchanges my cousin-once-removed used to organise*.
Almost, because they sit very low, and have an unfortunate tendency to slide even lower. Not so classic. (It defines my problem with most RTW trousers, too. Either they sit too low, or they are too wide in the waist. Eventually both.) Wearing a belt with them is quite necessary, and it only allows for longer tees and blouses.

This brown one is about the shortest that works. 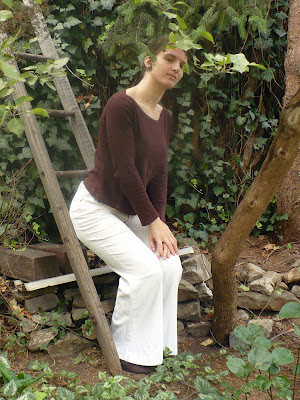 (The ladder is a bit wobbly, so I did not really sit on it.) 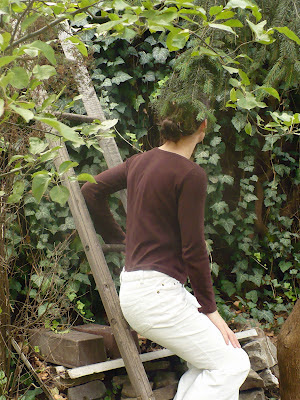 As is often the case with me, it's all thrifted. Including the pins in my bun: I got two of them from an elder lady friend of my mom's. And I very possibly found the remaining two pins in the street. I certainly did find the elastic that holds it together in the street. I have found most of my elastics in the street; I'm lucky like that.
This simple low bun is one of my new favourite hairstyles; very nice in summer, keeping the hair off my neck but suiting me better than higher updos. Quick to make, too.

Also: boatneck. Sheesh, I knew there was a reason why I was so stuck on it! 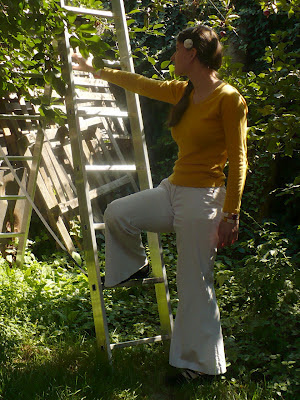 And one with a yellow T-shirt. I got it from my mom, who is every now and then seized by an uncanny ability to get me something that defines my stylish likes for years to come. In this case, somehow tapping into my increasing love for this shade of yellow.

When Oona sent me the cheerful fabric bangles, I didn't realise they went with my yellow T-shirt, too.

This time, it's Yksi. Cats make good photographing accessories. They don't care much for being fashion accessories, though. Good for them! 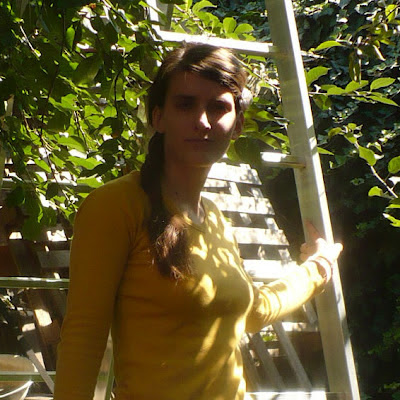 The flower pin (or, rather, the flower itself) is made after Disney's tutorial, only mine is yes-sew. Phew, no-sew is more difficult than yes-sew, isn't it? You need some fancy glue for it! I didn't bother fray-checking it, either; it's just a quick whip-up flower made of a scrap of fabric.


* It used to be a fun community, almost family-like event where you could get rid of your old clothes, get new ones and help out some charity project by the way. Now it's more of helping out a charity project with a fancy event, and getting rid of your old clothes by the way. I don't go there anymore, and my cousin does not organise it anymore. It's a sad thing. I got some of my best clothes there, and got rid of some I never wore. I can still take the latter to charity, but I don't get to meet my cousin in the process.
Vystavil Hana - Marmota v 13:06 2 comments: