Oops! This post never made it from the concept stage! It's been sitting there for about ten months... well, better late than never!

The Heritage challenge last year got me thinking about Moravian Wallachian folk costume (again, to make a full disclosure). I did not manage to make anything for the challenge itself, but over the months I found many pictures online, Pinning away on Pinterest. The last two challenges of 2015 eventually lent themselves to parts of the costume that I knew could be useful in other ways as well. Because I don’t live in the region, so wearing it as a folk costume is a bit out (although now, months later, me & my sister are reconsidering that part, too). But Moravian Wallachia is one part of my regional heritage that I feel a strong affinity to.

I thought the apron would be one thing I would not be making any time soon, because modrotisk (“blue print”), the traditional resist-printed, indigo-dyed fabric is only available from a few places (two?), and at cca 200 CZK per metre of only 0,8 wide fabric... it may not be the most expensive fabric out there, but certainly expensive for something that is just an experiment in historical clothing intended for practical wear. So of course, just to prove the old Czech adage that “people intend and God changes” – towards the end of November, mom found an old modrotisk skirt in her stores that turned out to have several holes in it, so I took the seam ripper to it, cut it up and turned it into an apron. Which I just so-so managed with some careful patching and by resigning myself to a less full specimen. Some folk costume aprons from further south in Moravia that I’d seen an online listing for have in them almost twice the amount of fabric as what my apron ended up with! Wallachia is a poorer region, so I feel okay with what I've got, but it does mean it doesn't go as far around my sides as I would prefer and the cartridge pleats have to be a bit looser. 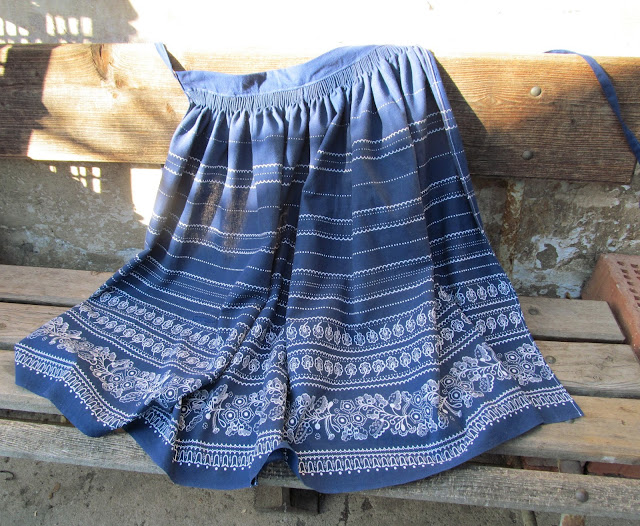 There’s another way, much more conspicuous to me (and experts, no doubt) in which my apron is incorrect: The aprons of Moravian Wallachia all appear to have a scattered small scale print, though often with a decorative border, rather than stripes of pattern like this. (One extant example here - it's just on Pinterest, because Centrální evidence sbírek is an unwieldy site that can't easily be linked back to. The fabric itself looks a bit different from most modrotisk fabrics I know, too - I guess it was further treated somehow.)

What the item is: A Moravian Wallachian modrotisk apron
The Challenge: #11 Silver Screen
What's your onscreen inspiration?: The Czech TV fairy tale „Pohádka svatojánské noci“ ("The Fairy Tale of Midsummer Night“) – set in Moravian Wallachia and featuring variously accurate versions of the local folk costume
Fabric: resist-printed cotton “modrotisk” – I salvaged about 1,3 m out of the skirt; rough thick linen for reinforcing the waistband
Pattern: none – it’s all rectangles
Year: The film is probably set in the mist of time before 1848, but the way I made it (with machine sewing), it’s got to be later – around 1900 or after, maybe? These folk costumes were among those worn way into mid-20th century.
Notions: three colours of cotton thread
How historically accurate is it? As indicated above, the machine sewing makes it less historical than the approximate setting of the film. And unfortunately, the print of the fabric doesn’t appear to be accurate for the region, although as far as I can tell, it is the correct type of fabric.
Hours to complete: I always lose count. Around 6? There is the hand-sewing involved in the cartridge pleats; otherwise it would be much quicker to whip up.
First worn: I think I’ve found the perfect use for it now: to keep balls and skeins of yarn in my lap while I’m knitting! :D It's not as tempting as a cooking apron when I have one that covers me more.
Total cost: Pretty much zero for me – the materials were all given to me. If it were to be made from the traditional fabric and a bit wider as I intended, it would go up to around 400 CZK, though.

The reinforcing strip of linen in the waistband: 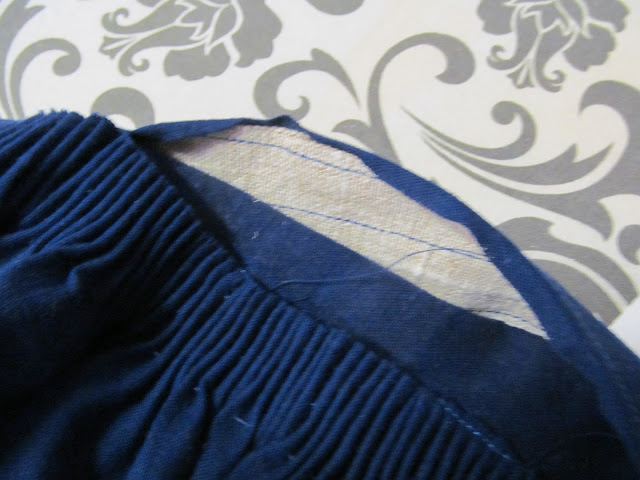 I was bitten by the knitting bug again towards the end of last year, when I first knitted myself a new winter hat from a lovely merino yarn, then some wristwarmers as gifts (which I completely forgot to take photos of before I gave them to the recipients). And then I knitted a pair of socks inspired by anextant Moravian Wallachian pair in the National Museum. I keep seeing all these lovely Latvian and Estonian mittens and stuff, on Pinterest and Ravelry, and as much as I love them, and as much as I love the fact these countries are being discovered by knitters around the world, my patriotic self went all "and what about Czech knitting?" inside me. So when I came across a so-called Latvian braid on an extant pair of Moravian Wallachian socks, I was sold and had to try to recreate the style.

I intentionally say “the style”, because I did not try to recreate the pair completely. For one thing, I did not have such thick homespun wool and had to make do with my stash – ending up with a pair made of fuzzy mystery yarn and quadrupled-up thin, probably polyester yarns. Not the most accurate of my HSM entries. But I love the style, so first thing I do when I get my hands on some suitable wool is try it again and maybe even better. :-) 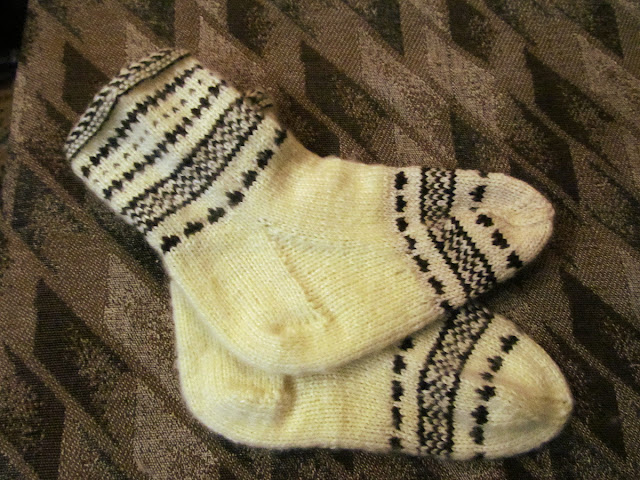 What the item is: Moravian Wallachian socks “kopyce/kopytce/kopitce/kapce”
The Challenge: # 12 Re-Do
What Challenge/s are you re-doing?: 1 Foundations – I did not intend to count it, but then Leimomi quoted her mother as saying that a good pair of socks was the foundation of a good outfit, so in it goes :-)
3 Stashbusting – all from stash yarn
5 Practicality – socks are practical, and these more so – they were worn into the everyday rawhide shoes, so for work and travel, and to protect the feet from chafing
6 Out of Your Comfort Zone – my first time trying to recreate a historical knitted garment (from sight), and doing the heel this way, and starting with a Latvian braid (and my second time doing a Latvian braid ever), and doing stranded colourwork knitting in the round (easy-peasy, no wonder it’s traditional); and, well, technically my first time doing 1880s, but I don’t think that counts :D
7 Accessorise – I don’t know if socks count as accessories in fashion parlance, but I do count them
8 Heirlooms & Heritage – the primary challenge for these, one side of my family hails from Moravian Wallachia
9 Brown – there’s dark brown patterning
10 Sewing Secrets – I started the first sock too wide and left it that way, which I managed to hide a bit by steaming but not quite, and less secretly, the second sock’s toes are made with different yarn, and I didn’t have dark brown so I mocked it up with very thin brown + black
11 Silver Screen – just like with my regular entry for that challenge, I’m drawing on the Czech TV fairy-tale “Pohádka svatojánské noci” that features Moravian Wallachian folk costumes
Fabric: yarn – a large skein of thrifted fuzzy off-white mystery yarn, doubled; off-white wool remnant; very thin mystery yarns, probably polyester – one white and one beige to supplement the slightly thinner wool, two black and two different shades of brown for the dark brown
Pattern: none – based on an extant example (men’s, it says, but all my other sources point towards knitted socks being worn by women) in the collections of Národní muzeum, and a tutorial in a Burda knitting booklet; patterning made up as I went
Year: 1880s
Notions: tools - size 2,5 needles, tiny safety pins used as knitting markers
How historically accurate is it? I’ll give myself about 50%, although that’s probably still generous for how it ended up looking... Original ones would be made of homespun wool, which mine definitely isn’t (working from stash). The fuzziness is very wrong indeed. And the patterning I used isn’t documented, although plausible. Colours and knitting style/shape as good as I could make it (it could probably still be better, and probably would be better with more accurate yarn); shaping and including the strip on the foot is definitely better than I’ve seen in currently sold examples. Conclusion: If I can get accurate materials, I can make it quite accurately.
Hours to complete: about 30
First worn: Around the house to keep my feet warm in winter, a lot :-) And I think I've worn them out a couple of times, too.
Total cost: Cca 50 CZK – the fuzzy off-white was about 30, IIRC (in a thrift shop); the wool (of which I only used a little) was about 45; the thin ones were a gift and I only used a little.

What I learned: A new and apparently historical way of knitting a sock heel (I’ve been mocking up store-bought ones so far). Tentative theory: the patterned strip on the foot that I see in extant examples and don’t in modern ones was done there to strengthen the sock in the area.

There's also this pair from the decade earlier, which is, interestingly, knitted very differently (the decreases at the toe are different - not symmetrical, and further into the centre of the sock; the wool's also different, I think). What fascinates me is that these older ones also have what looks like a variation on the "Latvian braid" at the top. As if that really had been a standard feature of these socks in the past (to strengthen the top edge?). Compared to both these extant examples, the modern examples I've seen sold online are a very pale attempt (that, in my opinion, shows they're no longer being made with functionality/endurance in mind)!
And this pair, which doesn't look like a Moravian Wallachian example, but it says on eSbirky that it was also worn into krpce (the rawhide? shoes), and it's also from the 1880s, so I used it as further reference for the knitting techniques of the time.
Vystavil Hana - Marmota v 09:56 3 comments: