#CoBloWriMo 7: Made for someone else - Making my sister's Wallachian shirt

The most recent "for someone else" project is my sister's Moravian-Wallachian shirt, which has already gotten some wear but actually awaits a re-do of the neckline gathers because they were done in a hurry before an event... Possibly also a re-do of the sleeves, because they are very long now. (It's a game of tug between what I think is correct and what she thinks will look good on her.)

So I'll just share some making-of now. That's okay; it's perfectly in keeping with my current wish to post more of the making-of.

It's mostly the collar; the rest was done in the evening without good photography light at a point in time when both my pairs of camera batteries were de-charged and I was taking photos with my phone... which isn't that good with lower light levels.

The embroidery is my sister's doing, though. 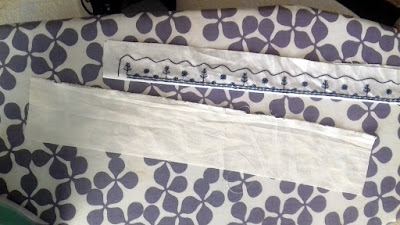 I'm very much indebted for the ideas of how to go about making one of these shirts to this Czech webpage. It actually covers the shirt - rukávce - of a very different folk costume, one from Uherský Ostroh and surroundings. In that area, folk costumes are much richer than they are in Wallachia. But the basic "skeleton" of the item is very similar, so I was very glad to have that starting point on how it goes together (since it's rather different yet from all the various historical items I've come across over the years).

Rather than have one big pattern piece for the body and tear into it and sew the sleeves into the tears like that tutorial does, though, I used separate front pieces and a back piece, because that seemed easier to make (though I now have my doubts), and to stack onto the fabric for cutting, Tetris-style, with all the smaller pieces and all the pieces for my own rukávce. It turned out it was a good thing we saved a lot of fabric this way, because it turned out I had calculated some of the pieces too small... my sister's shoulder pieces ended up being much bigger than originally drafted, in order to get the dropped-shoulder style she wanted. 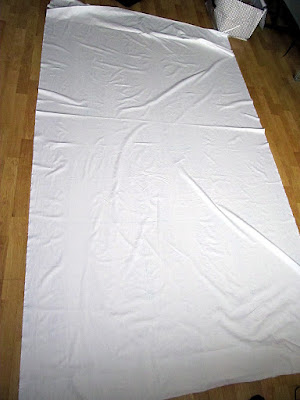 Our fabric is lightweight cotton, crisp but with some drape; it's plainweave, but I think the warp and weft are slightly different thicknesses, so it has a slightly different structure than your regular plain weave does. It's really nice to work with, though, and has, I think, exactly the sort of hand this project needs; although originals would have more likely been linen, in the 19th century. (We bought the fabric in Kars on Cejl/Tkalcovská in Brno, back in March - I don't suppose they still have it...)

Despite the regional difference and the differences I introduced myself (I wasn't able to find out how exactly Wallachian ones would have been cut); it's still that basic style of the shirt from the tutorial: rectangular body; two squares or rectangles (I went with squares) for the shoulders - or four, if you want to strengthen that area, which I'm realising is another thing I forgot to do; two smaller squares for underarm gussets; two rectangles for sleeves; one small, long, narrow rectangle for the standing collar.

And because things like this are always better explained with pictures - something along these lines: 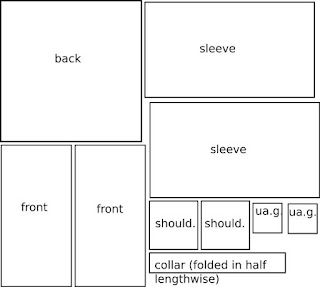 This is the most basic shape likely used in the Vsetín area, with variations being just in sleeve shapes. Width and length will differ, some gussets are rather longish triangles creating a more tapered sleeve, and some sleeves, rather than just being gathered towards the bottom, have a separate ruffle at the bottom. (They generally do have a ruffle, but it is often created - like my sister's will be - just by a drawstring running through the sleeve. I'm going to be different and, following my conclusions about a 1937 depiction, I'll only have the sleeve gathered into a narrow cuff, no ruffle.)

Some other areas (like Rožnov pod Radhoštěm) have a flat-lying gathered collar with a lacy / whitework edge, rather than this simple standing collar, like the one here.

I started out by constructing the collar. It's folded lengthwise, as I indicated above; one side is embroidered. Handling the fabric, I realised it needed strengthening, so I cut out another strip of fabric, this time in some old thin downproof ticking (it's softer and thinner than downproof ticking usually is, which made it a perfect lighweight, pliable interfacing for my lightweight fabric). The idea of using downproof ticking as interfacing is indebted to a member of the Historical Sew Fortnightly Facebook group; I've forgotten whom. (I'm going to run with the idea and also use it - the normal kind - to non-accurately interface my sister's bodice, because we really want it to sit smoothly.)

I also folded the ticking in half, and sewed it inside the collar with a longer basting stitch along the folded edge, on the inside side. Then I sewed the sides of the collar pattern piece, wrong sides out, and turned it and pressed it. 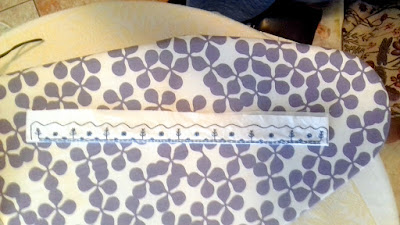 And then I measured it out in quarters and marked them with pins, in preparation for the gathered neckline. 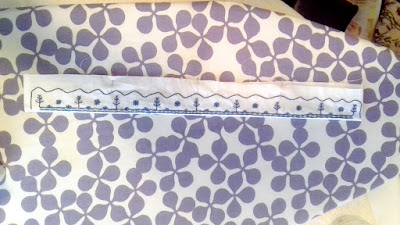 On to the body. I sewed a shoulder piece between the back piece and a front piece, like this: 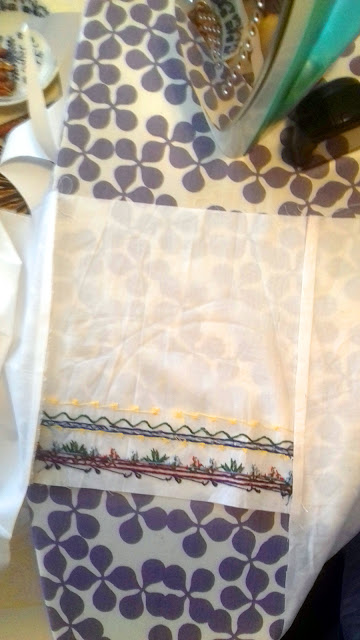 I only pressed the seam allowances towards the shoulder piece, not finishing them, because the idea was that another shoulder piece would be sewed on the inside towards the end... well, that didn't happen then in the hurry. :P

The shoulder piece is again embroidered, at the bottom edge. 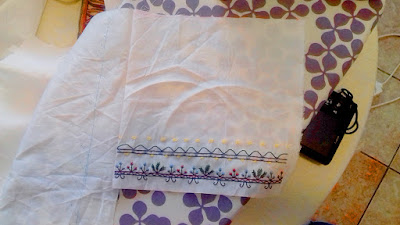 Me & my sister spent a lot of time poring over scavenged images trying to figure out what the embroidery would be like near Vsetín, and then we ended up designing our own going just for the feel of it (and our own tastes); because historical sources I found were low on shirt embroidery patterns, and modern ones are often machine-made...

And now we're at the end of what I can show you now: with the underarm gusset. Following the above-linked tutorial, I sewed the underarm gusset about 5 cm (not counting seam allowances) bellow the shoulder piece, between the front and back pieces, and flat-felling the seams and sewing up the side seam at the same time. 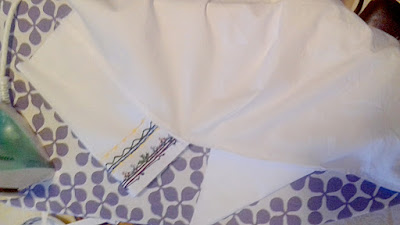 Rukávce are typically open in the front, closing with hooks and eyes or buttons at the collar and then crossed over and held just by the bodice worn outside. For my sister, though, I sewed up the front, too, leaving just a slit; inversely, she wanted to leave the neckline open. I took pictures of that front seam and slit, too, but they were too blurry. :P After that, I was in too much of a hurry to take photos. So, to be continued with my own shirt and the alterations I shall make for my sister, later...
Vystavil Hana - Marmota v 20:49