- Father Brown in The Perishing of the Pendragons, G. K. Chesterton 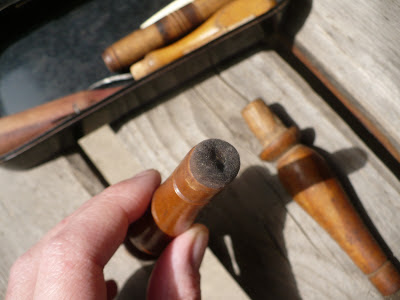 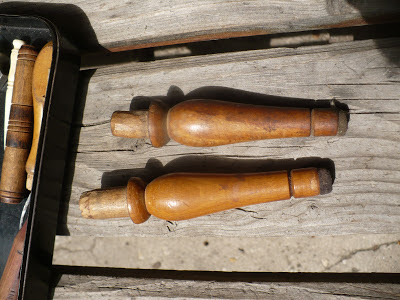 Don't they actually look a lot like little furniture legs with felt nailed on the bottom to prevent scraping?
The other end would be a spike to insert into the bottom of whatever furniture-y thing they were originally attached to...

That seems like the most logical explanation to me. But it had not struck me until I saw them in the photos, apart from the tools in the box. 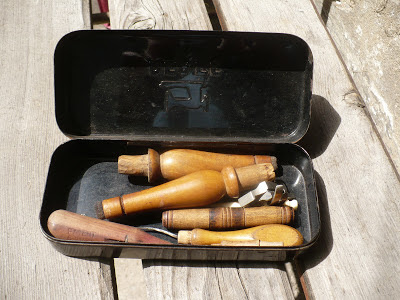 I've always liked that thought in that Father Brown story, but now it's really been delievered home!


(I still think they make pretty tools, once I find what they're actually useful for...)
Vystavil Hana - Marmota v 22:23 7 comments:

Remember how I talked about Ema and her fancy snap-on feet that are incompatible with the Lucznik's old sturdy ones?

Well, in aunt's box of tools, there were also two sewing machine feet. Including a rolled hem foot.

It's obviously not a fancy snap-on one, but it fits.

(Also, since I wrote that post about Ema, I found a stash of empty bobbins - I'm even more grateful now that they're interchangeable!)
Vystavil Hana - Marmota v 19:41 6 comments:

Look what I've got! The aunt edition + A dog story

My aunt is moving, and getting rid of stuff. She decided to get rid of a large part of her sewing supplies, because, as she said, sewing clothes is not really her thing after all (she makes super-cute toys, like my old teddy). Among other things, that means those old magazines are now definitively mine.

Today, I went to her home to pick some thread and other things (which turned out to be quite a load). I walked, and made a detour through two more villages - well, through one additional one as opposed to the usual way. As I walked through that village, I met a dog. The dog decided I was interesting and went on with me. 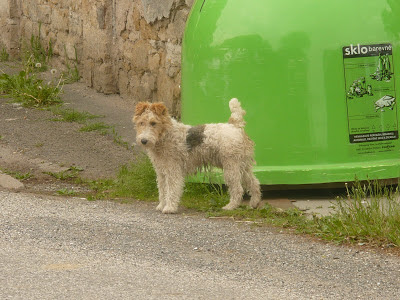 This is Dog, before I realised he was not going to stay in the village...

At the edge of the village, I got a first indication of Dog's unique nature. Dog kept running away to inspect various interesting smells along the road; but he kept running back to me. During one such expedition, he got in the way of a car. The driver glowered at me. I shouted at the driver that Dog wasn't mine.

Dog thought I was his, though.

He continued running around me, following me, running in front of me, running through puddles, getting in my way, getting in the way of cars (one stopped just in the nick of time, with a terrible screech) and being a total disgrace. 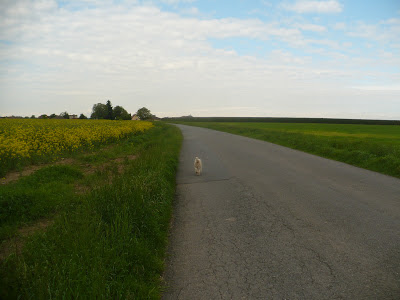 A clever and audacious and stubborn and cute disgrace.

He went with me all the way to aunt's door, where I had to get in through a narrow gap so that Dog would not follow me into the yard.

A sleeve board! This one I actually already got on Sunday. But oooh, I've been thinking for some time now that I really really needed this! 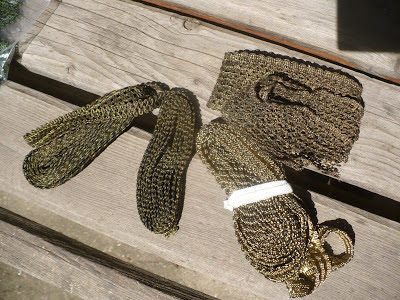 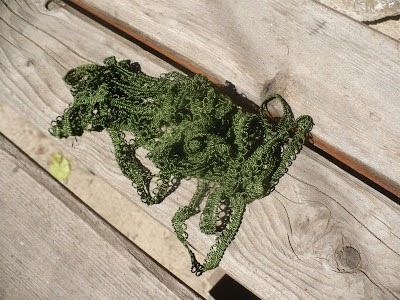 Some trim. The gold one on top is almost like knitted net, so I'm thinking that maybe I could manipulate it into a hairnet or something...
I also got lots of lace, but that I did not bother photographing. Sooner or later, I'll hopefully use it for something, and then you'll get a photo. 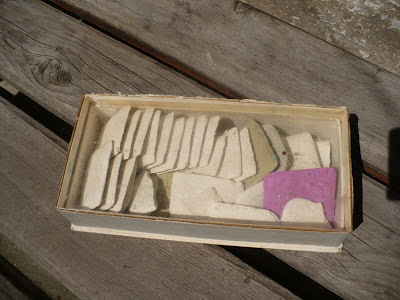 A box full of tailor's chalk! I think I'm going to share this. :D Although I'm definitely keeping the magenta one. 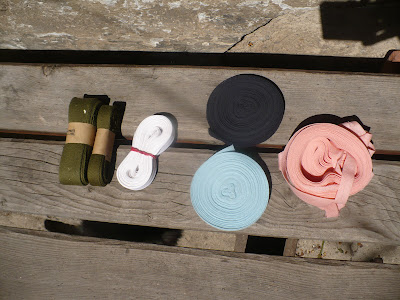 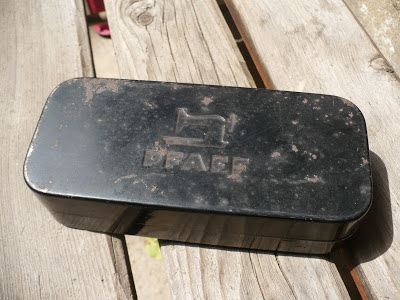 I have a feeling I've seen something like these before, but I can't place it. 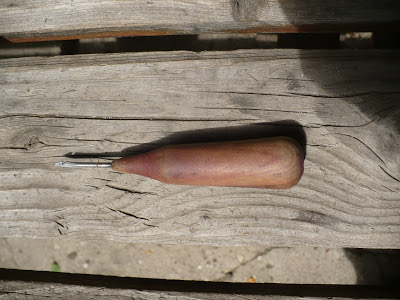 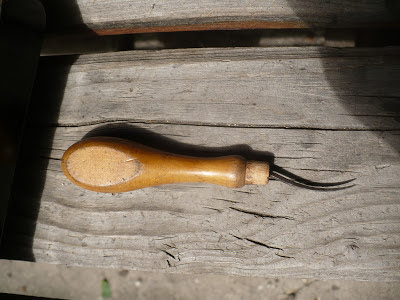 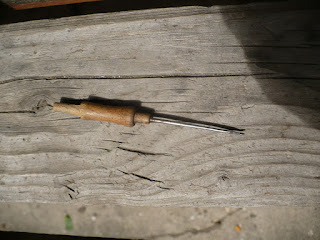 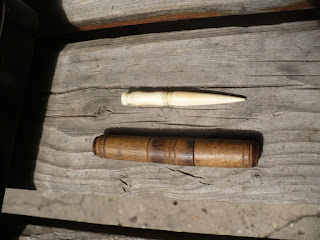 A wooden needlecase! How wonderful is that? Also, now I have one of those bone awls! I think that may come in useful when I want to be sure my eyelets won't get too big.

And then I got lots and lots of thread; mostly polyester, but also lots of thick linen heavy duty thread, and two spools of Gütermann's buttonhole twist!

It can't get much better than free Gütermann's buttonhole twist, I think. If I manage it before aunt moves, I think I at least owe her a Tiramisu or something...


After I got home and sorted out most of the things, I eventually got a text from my aunt, telling me the dog was now sitting at the bus stop in my hometown: just to wrap up the story. 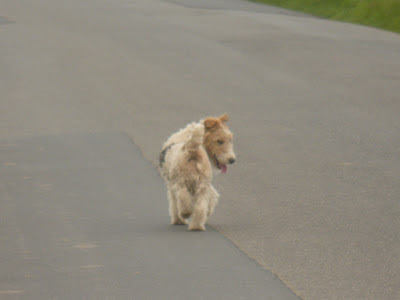 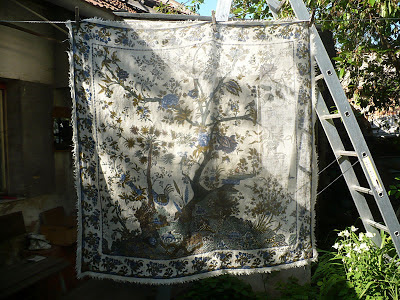 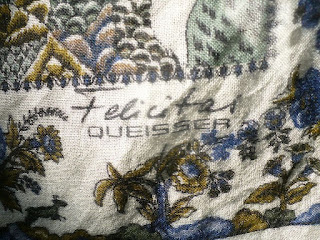 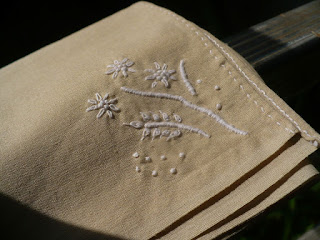 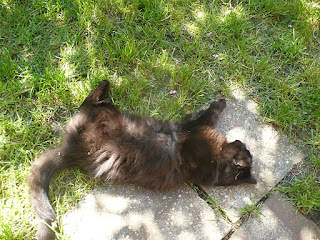 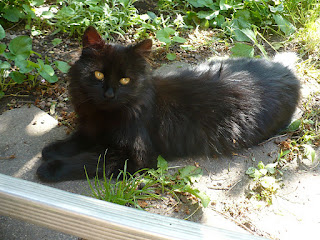 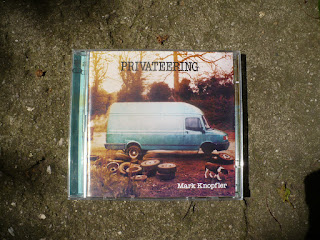 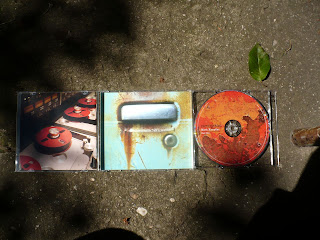 The more I listen to this album, the more I love it. Or, rather, the songs on it - Privateering is a very song album.
Also, the colours are giving me ideas. As if I needed them!
Vystavil Hana - Marmota v 11:37 6 comments:

We went to a Mark Knopfler & Co.'s concert in Prague yesterday. I cannot refer to it as just Mark Knopfler anymore, and below is a taste of why.

The security at the venue was fairly tight. I began to think my previous post had been premature... I had gone there straight from Brno, and I had a backpack with lots of things that would not have gone down well, like a jar of pins, a tin of needles and my trusty ol' Swiss pocketknife. Thankfully, there was a "depository" where you could leave your backpacks (for money, of course). My sister said the concert better be worth it. I said, with Mark Knopfler, it's fortunately a sure thing.
And boy was I right.

They started out with What It Is, and that alone would have sufficed me. They went on with two new songs - I fell in love with Privateering immediately (must buy the album!) - and then came Hill Farmer's Blues, and that would have sufficed me, too.
But it did not end there. Eventually, Marbletown (the song from the video above) came up. That's a song both me and my sister enjoy a lot, and we kind of even sang, before we realised that probably disturbed the others; and then the band went and did that - although the best part is more or less missing from the video. I wonder how often a single fiddle and a bass keep a hall of some 6000 people on their toes?
They played many other songs, of course, including Sultans of Swing (which is a decade older than me, but you would not know from the audience reaction), and I kept clapping so my hands soon hurt (my arms are still aching a bit) and I kept grinning with utter delight. Until about halfway through Speedway at Nazareth (which is another of those songs that would be in my top ten by MK, except that I'm not sure there are ten of them), when I started biting my finger in order not to cry, because it was so monumental. And then they played Telegraph Road, and I cried.

They got a standing ovation; and I'm still processing the experience.

In other news, Sabine of Kleidung um 1800 made an amazing, amazing discovery concerning early Regency stays and shared her source, so if you're the least bit interested in the clothing of the era, go and read her "Short Stays Studies"! 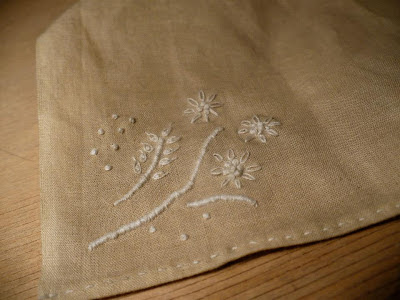 Oh, and then HSF Challenge: Flora and Fauna. I wanted to sew a dress (I would have cheated by machine), but as I travelled between home and school, I kept forgetting things - material, and pattern, and suddenly it was Sunday and nothing had been done; so I took out a handkerchief I had started a while back, finished the hems and added an embroidery on my way to Brno. The fact that I forgot my embroidery hoop and drew the pattern on a train shows, but I think all in all it's good.

The fabric is this one - stashbusting is going on, too, even though I never officially signed up! I had used more of it for bias binding on a very Frankensteined project that has yet to be photographed...

The Challenge: Flora & Fauna
Fabric: Cotton remnant
Pattern: None whatsover - the handkerchief is obviously just a square, the embroidery is winged (it kind of shows)
Year: 1800-ish, but that's just the overall "feel" I was aiming at
Notions: white cotton thread
How historically accurate is it? It's natural fibers and fully handmade, but I wasn't able to determine what your common handkerchief would have looked like (I only found lacy ones), and did not have time to check whether the stitches are truly accurate.
Hours to complete: I'm bad at this - maybe four?
First worn: Not worn, not used yet. It needs a wash first.
Total cost: The whole remnant was 9 CZK, and this is just a piece of that. The thread was vintage. Even the needle was a vintage pass-me-down! So it's somewhere around 3 CZK plus time and work. Yay for remnants!
Vystavil Hana - Marmota v 19:38 4 comments: