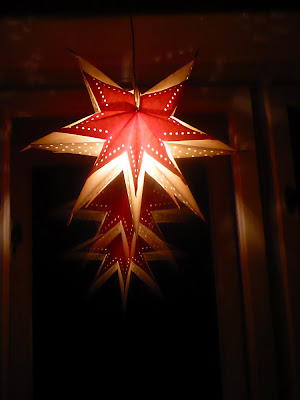 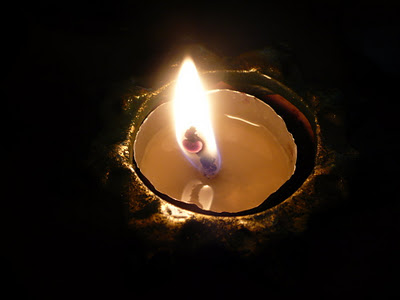 I "made" a candle - remnants of wax, the tin and wick holder from an old burnt-out candle, wick made of cotton scrap. Quite effective.
Vystavil Hana - Marmota v 21:08 7 comments:

Back to Tallinn! It's been too long.

One last parting look at the hospitable courtyard from the last post... Another of the museums I did not have time for - the City Museum. The street seemed a bit too turist-y, so I went to the other side of the old city walls, through a gate between the church and the red brick house. Saku (pronounced Sakku) is apparently a small town near Tallinn. And a beer brand, which father later pronounced good. The sign on this house says "Riigi muinsuskaitseamet". From what I can gather online with my limited knowledge of Estonian, it's some institution of Ministry of Culture, or some such. ("Riigi" makes it sound like something to do with Riga, but it's in fact the genitive form of "riik", which means "state.")

"Bread - restaurant and garden". Would you name your restaurant "Bread"? Apparently, in Estonia you can. Next to it is a memorial to the ship Estonia, which sank in 1994. The Estonian Centre for Children's Books. This was the only photo I could get of this beautiful beautiful door... This is (as seen below) a Ukrainian Greek Catholic church. Situated in the most bizarre little house I've ever seen. The street was narrow and I could not get a shot of the whole thing, but I think this suffices to give you an idea.