Cherry soup, cherry on my apron

Real Life caught up with me and I did not post several things I wanted to post for the Bramblewood Fashion blog event (which I keep forgetting to link back to). Like a cap knitted after the 1950s magazine I bought a while ago. And my absolutely favourite 1940s film, which is probably one of my favourite films of all times, but its awesomeness happens to be extremely hard to convey only in pictures and words to people who don't speak Czech... And such like.

So in this post, I unite the culinary Thursday with the Fashionable Friday to make up for that easily.

Today, I made this: 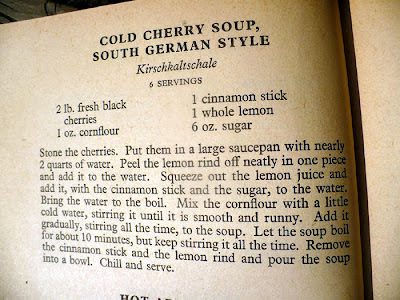 It's a recipe from "Cooking the Austrian Way" by Ann Knox, a 1960 revised edition of a 1958 book, published by Spring Books in London. It's part of a series - I also got "Cooking the German Way", and there are others, including "Cooking the Czech Way", which, sadly, I did not get (it would be interesting to see Czech recipes translated to English readers). But these I did get I got in a secondhand bookshop for the ridiculous price of 10 CZK for both the books, which is about 50 US cents. So no, I'm definitely not complaining.

Although I also had to utilise a 1924 book to get the amounts right. 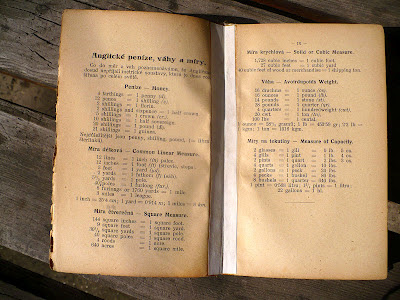 That's an old English-Czech dictionary. It has these useful conversion tables for all sorts of measures in the beginning. (There's just one catch: they got the decimal point in inches wrong.)

So, cherry soup. I used frozen sour cherries from our cherry tree instead of fresh black cherries. (I wonder what the Germans/Austrians originally used, because Wikipedia tells me black cherries come from America.) And because they were sour already, I added less of the lemon juice. And we happened to have no lemon, just bottled lemon juice, so I used orange rind instead.

I was rather proud of my orange rind. 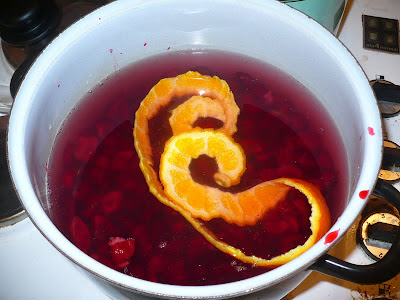 Also, I used cornstarch. Not flour. The way the recipe treats it suggests it's starch.

But I did use a real cinnamon stick (which was rather hard to fish out of the soup when it was finished).

Orange + cinnamon take it near mulled wine territory, and orange + other fruit + cold somehow also takes it near sangría territory (why do I have to remind myself of sangría?!); while the sour fruit + starch takes it into the realm of kissel. I'm not particularly fond of mulled wine, but all the others I love, so it sounded good. And it was another way to use our cherries outside of sweet dumplings, cakes and compots.

We did not wait till it was completely cold and took it from the fridge in a rather lukewarm-to-cold stage. Not that it made such a difference. When my sister was laddling another bowl, I remarked to her that, apparently, the recipe met with success. She replied "Not just success, it met with devouring."
I hope that conveys to you just what this soup is like. I'm glad I made the 6 servings amount. 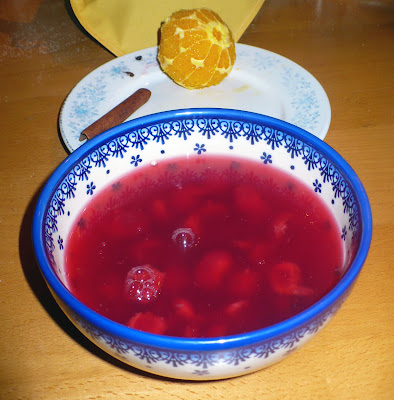 My bowl is a handmade-in-Poland bowl my (other) sister brought me from Wroclaw as a birthday/Christmas (choose one) gift. Making this a thoroughly Central European dish.


Stoning the cherries was a rather lengthy and messy affair. (BTW, why is it called "stoning" when it is, obviously, rather a "de-stoning"?) They bleed a lot, they even spurt into all sorts of unexpected directions. The juice colours everything it comes into contact with hot pink. Especially your clothes. 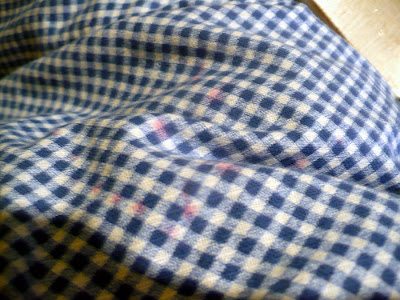 Which is precisely the reason why I made this apron in the first place. 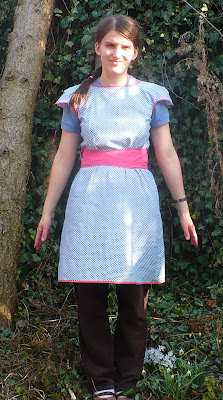 And now you can finally see what this piece of utility clothing sort-of-inspired-by-50s-but-not-quite-worked-out actually looks like finished.

Not quite worked out because I did not have enough fabric and made the skirt up as I went; and altered the fit as I went which only resulted in other fit problems (like the bust darts not really hitting my bust point). 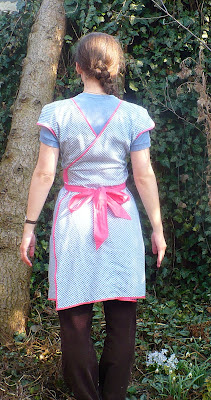 And the skirt does not exactly line up in the back.

But it's a piece of utility clothing that actually serves its purpose - proven - and my sister asked me today to make her one following the same basic structure one day. So when I find another apron-worthy fabric, I'm also making another one for myself, this time from an improved pattern. Moreover, it has fun colours, colours that match the purpose it was made for. Which was one of the reasons why I used the Very Pink Poplin of Doom on it.
(The Very Pink Poplin of Doom has earned its own tag. It currently beats other tagged subjects in the number of posts it's appearing in, so why not? It's a special fabric. Very pink.)
Vystavil Hana - Marmota v 21:35