The best "chick lit" there is

And one more post for today! This is not a common practice on this blog, but it happened that way... This is for the "Fun Monday" in the Bramblewood Fashion blog event. "Share Game{s}/TV Shows/ Radio Shows/Music/Books from the era." 1930s for this week.

I love books, so I decided to go that route with all the eras. We have lots of books, and I like getting the old, pretty ones in second hand bookshops. Finding a 1930s book proved to be a bit difficult, though - it was not a common practice then to print the publication date in the books (I think it wasn't until 1940s or 1950s). So I went through all of my (our) old books and it turned out those that were dated were either from the 1920s or the 1940s. This one is not dated. It was first published in 1937. This is the second edition, but everything about it looks reasonably 1930s to me; these books were very popular, so I think it's fair to assume it was published at least twice during the 1930s. :-)

Sooo... that was the historical reasoning behind sharing this book. The rest is a heart matter. 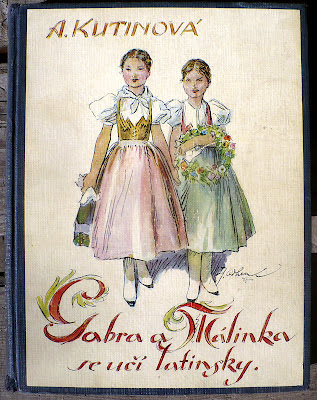 "Gabra and Málinka Are Learning Latin"
It's a third in a series of six; I have read five of them; own the first as well.
They're semi-autobiographical books (the writer, Amálie Kutinová, is Málinka), following these two sisters as they grow up from children to young women. The older, Gabra, is lively, impulsive, a bit of a tomboy. Málinka is a daydreamer with a gentle soul. They come from the Moravian region of Wallachia, which shows in the way they speak as well; in the first book they live in a village, then they move to a small town, eventually (in the last book), they end up in Prague.
And the books are a lot of fun. Nothing didactic about these; it's pure, unadulterated yet quality and uplifting entertainment, a chicken soup for your soul kind of books. 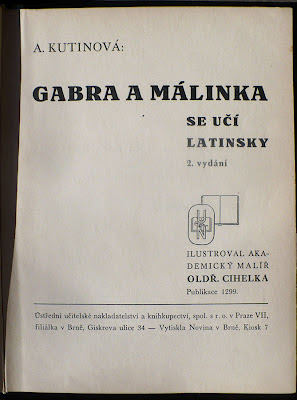 In spite of the school-related name. In spite of being published by a teachers' publishing house and bookshop. There are moments that could sound preachy and didactic in a less capable writer's hands, but here you can feel the author lived what she writes. 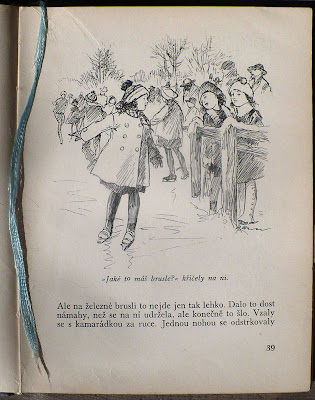 And, as I said, in spite of that moral background it's pure, unadulterated fun. Like this story where Gabra desperately wanted to get skates for Christmas and did not get them because the family was not very well-off. So she followed her grandma's advice and used wooden logs instead. And being Gabra, she turned it into a advantage, had a lot of fun and all her friends and classmates envied her.
Which sounds kind of stupid when I write it like this, but it's not. See, that's the mastery of Amálie Kutinová. 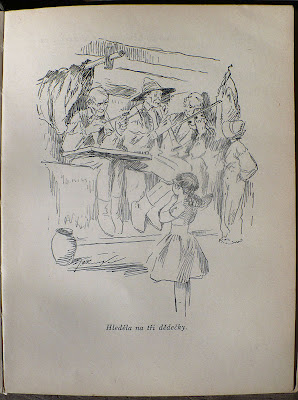 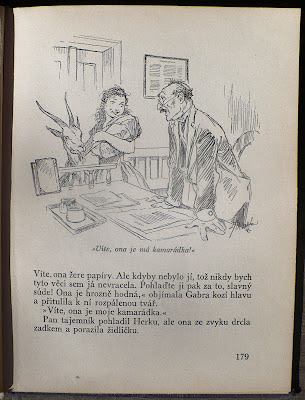 The last story is the best: Both Gabra and Málinka have a goat. Gabra's goat, Herka ("Nag"), eats paper. One day on the graze, she finds some papers in a hole - but those papers turn out to be money, and there's some jewellery and other things like that as well. Apparently, a robber's stash. Gabra takes it to a bureau to return it - taking Herka with her. Lots of fun ensue.

The first book is full of funny events, the last two books are less fun and a bit more serious or sad at times. But overall, it's definitely what I called it in the title: the best chick lit there is. There is nothing artificial about these books.