I give up on the sontag. For now, at least.
The circular needles are not good at all. They're certainly better at keeping the stitches on themselves (the needles). The matter is, they're too good at it. I had trouble getting the stitches that had gone from the needle part to the cable part back to the needle part when I needed to knit them (if that makes sense; I lack the proper English terminology for this). Which means every row was taking me much longer to knit than it usually would. So I only made about 17 rows. Until I arrived to a stitch that had got too tight and simply would not go. At. All.
So I apparently have to start again. For the third time. And I'm positively fed up with it by now. By now I should have been somewhere at the winged part, as others are. Instead I'm back at the beginning. And it's frustrating me, and it's pointless to keep struggling with a project that's frustrating me. Plus I have a medieval dress to make, among other things.
So I quit. I might pick it up again when I have more time and come up with a good needle solution. The time is not now.
That was the bad news.


The good news is, we were on the exhibition opening yesterday, and the Latvian president did arrive, and made a (very nice) speech, and we were not the most casually dressed ones there, nor the most dressed up, so I guess we managed well. Many thanks to all people who gave me their opinions, here and on the Sense & Sensibility boards, and on BurdaStyle.
The exhibition is nice, too - photos of the "Baltic Way", the human chain people from the Baltic countries created back in August 1989 when they were not Baltic countries, only the Baltic part of the USSR. There were interesting things. Like photos from a photographer who had a chance to go take photos of the human chain from a helicopter, but declined the opportunity, because he believed it was more important to document the funeral of a Latvian soldier who died in the Soviet army. I still cannot decide whether he was stupid that he declined such a historic opportunity, or whether he was wise to go and take photos of a funeral that probably hardly any people paid attention to at that time (and even less so now), just because he believed the person deserved it. The creators of the exhibition probably thought the former - I guessed so from the short description, because it said "unique opportunity". But I'm not so sure about it myself.

Anyway, because Stephanie Ann asked for a "fashion show", here you go: 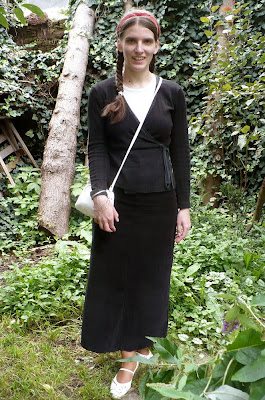 (I look a bit weird. That's because I was just trying to tell my sister that she probably had the camera tilted, but she was already taking the photo. I think it's mostly Adéla's fault, not my sister's. Adéla's seriously taking up about one eigth of our whole garden.)

I wore:
- the red headband
- a rather old, dressier, white T-shirt
- a thrifted black wrap cardigan
- a black corduroy skirt from a clothes exchange
- white heeled shoes
- old white purse that's been lying in the wardrobe for ages
- my sister's bangles

I'm rather delighted by the fact most of the things I wore were secondhand...

Just to make thing more fun and tense: I had originally wanted to wear my hair loose, but when I set out to arrange it that way yesterday (I sleep with my hair braided, it saves a lot of trouble combing it), I foud out that I had the infamous Bad Hair Day. Somehow, when I last washed my hair, the grease only proceeded further down the hair and was not completely removed. I did not notice, because I braided my hair wet. And it looked weird, and I did not have time to wash it again. So I wore two braids instead, and felt a bit silly and childish and quite good at the same time.

It's "Bisha meets woodpecker", because Bisha, my cat, is black with white "bib" and feet, and because of the red headband.

My sister - In black and white and violets 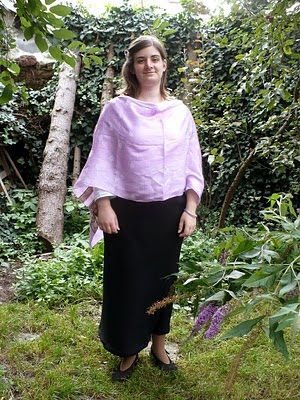 She wore a black skirt, and white Indian blouse (which I hemmed for her to be shorter), shoes that used to be my other sister's, violet shawl of uncertain origins and in her hair (which you might see a bit of on the bigger picture) a violet bobbin-lace butterfly our wonderful crafty grandma made. And bangles.
Vystavil Hana - Marmota v 17:02