The Dreamstress deemed my blog "an excellent insight into Eastern European historical clothing" and now I have a reputation to keep.

Fortunately, I have a family. I have a sister who loves Latvia and spends equal time there and in the Czech Republic. And I have a father (surprise, surprise!) who recently visited her and travelled with her around Latvia and some of Estonia. And among the places they visited was the castle in Ventspils.

And he took photos of three historical outfits for me.

An Edwardian outfit.
I'm not a big fan of Edwardian clothes myself. I like an outfit here and there, but something about the general style of them rubs me the wrong way and sends off the message "old-fashioned". You see, even though I really, really like historical clothing, I'm not a huge fan of old-fashioned. I like historical clothing because it looks fresh in comparison to the cookie-cutter styles of today and gives me freedom style-wise (read: I can wear what I like and blame it on historical clothing). But Edwardian, somehow, looks modern enough not to look fresh in this way, and not modern enough not to look old-fashioned. It's also quite unlucky in that the two decades it's sandwiched between work better for me.
But some people like Edwardian clothes, so if you're one of them, enjoy this Latvian outfit! I quite like the fabric the blouse is made of, and the small glimpse of something embroidered peeping out of the right sleeve. 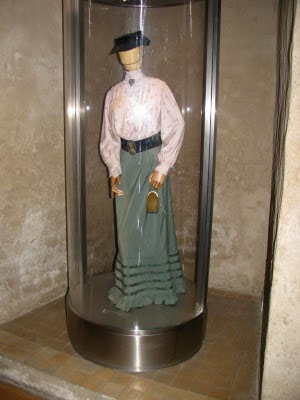 This is a prehistoric Latvian (Curonian) costume. Well, I'm not that sure about the Curonian part, but I know it's prehistoric, because my sister has a brochure on Latvian folk costumes. It's in Latvian and Spanish. I do not understand much of either of the languages, but together I get the picture. :-) (But I do not have it at hand right now, sorry.)
The patterned woven belts are called "jostas" - well, that's actually belts in general, but these patterned ones are typical of Latvian folk costumes. (Latvian "o" is pronounced as "uo"). I even have a brochure on making them, but, of course, it's in Latvian and my sister hasn't gotten around to translating it yet, having much else to do. 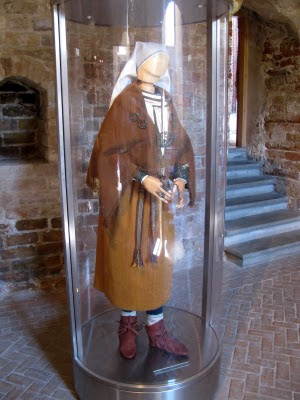 A new Curonian folk costume. Those huge round brooches/buckles are, I believe, typical for Curonian costumes. Those from other areas of Latvia are smaller. 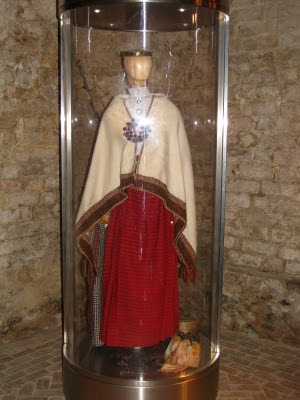 Ventspils is a place I'll have to visit one day. Not only for the historical costumes: 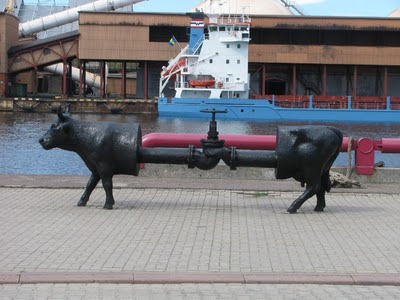 Yesterday, I laughed at this photo for about two minutes.
Vystavil Hana - Marmota v 12:50