A little thing to make me happy 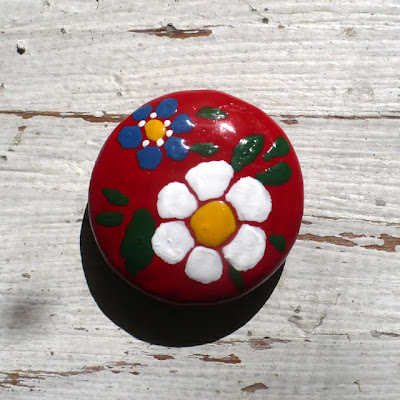 I bought acrylic paint. And, among other things, I painted a poor solitary wooden button from the stash to my liking.

I've wanted a button like that for a long time, to go on the mobile phone case I made. (I thought I had posted about the mobile phone case on my Czech blog, but apparently I had not, and now I'm left with a mystery where did I actually post it, because I remember getting suggestions about possible closures for it from other people online...)
I was looking for red wooden buttons with a shank in shops, but that's clearly too specific a requirement. Then, after quite a lot of unncessary frustration with a tiny thing, I realised what I usually realise soon with other things, that the easiest way to get what I want is to make it. And because I had other ideas what to do with acrylic paint accumulated in my mind, I finally bought acrylic paint.

I thought acrylic paint was expensive for the amount you get in one small bottle. Turns out that it's not. Turns out that, with my uses for it, I could be using that one bottle for years and years.
Of course, I have more than one bottle. I have seven: red, yellow, blue, white, black, silver and gold. I think I can achieve just about anything with those seven colours, except that I'll probably have to buy a lighter blue, too, if it's available. The one I have is a darker shade and it turns out it's really, really difficult to achieve paler but bright blues with it. It took a lot of mixing (with yellow and white, and more yellow, and more white, and eventually also more blue...) to achieve the blue on the button, and it's still not exactly what I had in mind, but it looks good on the button.

For the record, this is what the poor button looked like before: 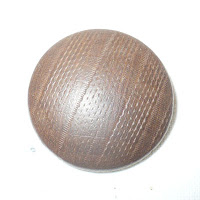 I dare say what I did to it is definitely an improvement. Especially because it was a lonely, solitary button lingering in the stash, and now it's going to be used and look pretty.

Considering I probably suffer from a mild case of koumpounophobia, it's really a blessing that a button can make me happy.

(That link leads to a video of Neil Gaiman talking about buttons as a promo to the film Coraline, which I haven't seen. The video - posted on his blog - was the first thing that allerted me to the fact that my disgust of buttons might be more common. Fortunately for me, I'm not really scared of them. I just find those ordinary ones with holes disgusting and unpleasant. I don't mind fabric covered buttons or buttons with shanks - those I actually often find cute, on their own. Thank God for that, really!)
Vystavil Hana - Marmota v 11:40