Beginnings of a Sontag and One Clever Cat 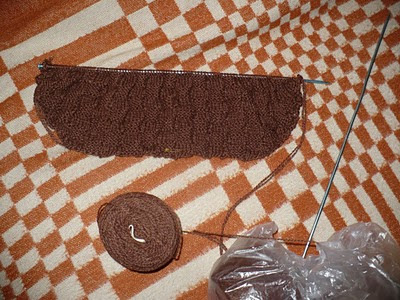 As you may or may not know, I'm participating in Stephanie Ann's Civil War Era Knitalong and knitting a sontag.

I've just realised that if I'm to post my obligatory knitalong post, I should do so now - tomorrow I'm going to a concert and I won't have time.

So here it is. My seven rows of blocks and the beginnings of an eight. Considering I started knitting on Friday, I think I'm catching up nicely. :-)

As I already wrote in comments on Stephanie's blog, I tried adding stitches by knitting two eyes out of one, but it was messy, so now I simply add them by wrapping yarn around the needle. It is easier, and saves me the trouble of making sure how it looks... It's on the edge, so the holes thus created are not such a problem. Stephanie Ann assured me it's a perfectly period way of doing it, so, hoorray!

The rest of my sontag is not so period. The yarn I'm using is not 100% wool - only 40%. But my objective for participating in the knitalong is not so much to make it period-accurate as to use up yarn that's been lying around the house for too long. And that's certainly the case of this one. My mom started making a sweater out of it a long time ago and never finished it. Recently I turned a part of it into socks for my sister, but there's still a lot left. So now it's becoming a sontag from an 1860 pattern. I think that, outside of being a blend, it's perfect for it. Very pleasant! And there is some wool in it.

I have no idea what type of yarn it is, weight-wise etc. I think it's worsted - at least the lables say that the factory that made it is a factory for worsted yarns, so that's another requirement gone wrong... Whatever. I like it.

I knit it doubled - it's quite thin on its own, doubled it's just fine. And the knitting goes faster. ;-)

Oh, and the border is going to be green. I did not take photo of the green yarn, but it's very similar to the brown one, only it's already unravelled from something that it previously was - I don't know what.

I'm probably using needles a tad bigger than necessary. But I always knit very tightly, so I think in my case it only helps - now my knit is nice and fluffy, which I have never achieved before. Ho ho!

I'd like to follow Stephanie Ann's example and show you a cute kitty-and-yarn photo. Except that I'd never let our cats close to this project. Still, I present to you, separately, Yksi The Penetrator, who's earned her nickname by learning how to open the front door: 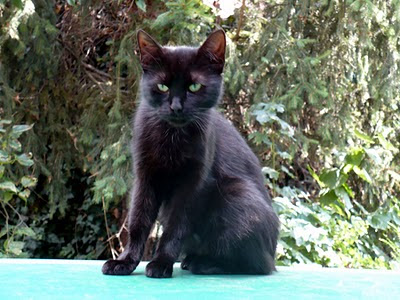 (By jumping on the door handle from above. Don't tell your cats.)

She's sitting on the Green Monster (aka car) and examining my camera. Or maybe going to eat. That's not quite clear.
Vystavil Hana - Marmota v 22:04