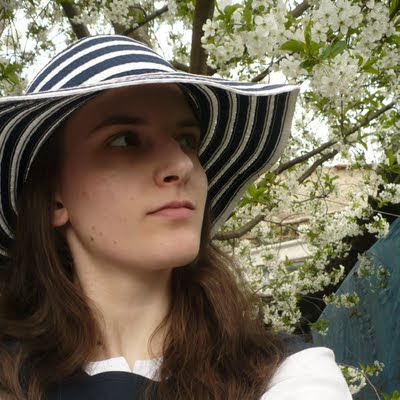 I've been admiring these floppy hats for some time. Actually, it's easily traceable back to January 2010, when I saw Play It Again, Sam - Diane Keaton wears a fine specimen of the kind there... And then they started popping up everywhere. Like, you know, The Sartorialist. I've been on a one-eyed lookout for one ever since I found a 19th century one from the Metropolitan Museum of Art.
And now I have one! It's my birthday/Christmas gift from my friend, which I got yesterday - we're a bit behind, but I don't mind getting my gifts around Easter at all. Thanks, B. :-)
Miss Barbora is a character in the most popular Czech book, Saturnin. It was written in 1942 or so, but it's set in sort of a timeless floating bubble, so many people assume it takes place in 1920s or 30s, and I would, too, were it not for a little mention of dim-out. Miss Barbora is the book's narrator's sporty, spirited, elegant love interest. When father saw my new hat, he said I would need the proper clothes to wear with it, and when I asked what he had in mind, he said "I don't know, something like what Miss Barbora would wear." 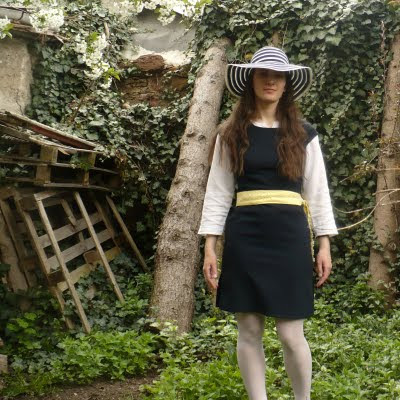 This is what I wanted to wear on Saturday and did not. With the hat, because, wow, it matches the dress perfectly!
The dress is from clothes exchange, apparently homemade (by a skilled seamstress) or custom-made, because there's no tag in it and no indication that there ever was one.
The blouse is my sister's. The best thing to go with that dress (which is a bit indecent for my comfort on its own), but, as father also noticed, still not quite perfect. I think I'll take heed of his advice that it needs something short-sleeved, and will try to make myself a short-sleeved version of my sister's blouse. Anyway, thanks, Marta, for allowing me to borrow it. :-) The neckline is perfect for the dress. It's Indian, cotton, embroidered white on white. And it has a bit of a peasant feel about it, worn under the dress this way, it would need something crisper. I seriously think these floppy hats need to be paired with something crisp to look really good.
The belt has a history. It was made by my Wonderful Crafty Grandma, for my mom, as part of my mom's dancing lessons dress. That puts it back into, most probably, 1972. The dress to go with it looks quite that date, too. It's been long lost, until mom somehow discovered the dress, with the belt and the short skirt of its first incarnation, tucked away somewhere at grandma's place. It must have been put away right after she came home from the dance, because it smelled of sweat and there were mudstains on it... Anyway, I finally got around to washing it (by hand) - the mudstains did not go completely yet, but the belt is good for wearing, so I tried it with this blue dress and liked the effect.

And now the big question... do you think I could wear this to a wedding? Should I try to make the blouse to go with it in a month's time, when I have other things to make, and am not even sure I have the proper material? I think I want to, but would like to know what others think... I still have another option.
Vystavil Hana - Marmota v 12:45