Is RTW clothing made by machines? 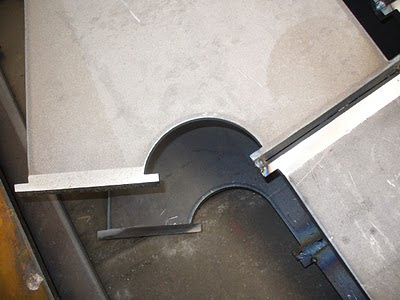 This is not a kind of matter I would normally address... neither here nor offline. My discussion of ready-to-wear clothing usually ends at the problems of style, price or fit (mostly fit).
I'm not venturing into the tricky issues of sweatshops and production of clothes, because A) there are people who know much more about the matter and can write better about it (such as the fantastic lady behind Fashion Incubator, or Outi Pyy), and B) in relation to sweatshops, this is one of the things I prefer doing something about instead of talking about. Because of A), it's much easier for me to buy second-hand and make my own clothes (preferably from second-hand fabric) and occasionally buy ethical (hopefully) new clothing than to try to convince others to do that. I don't study clothing design or production, I study languages and am happy studying languages.
But an off-hand, surprising remark by no one else but my own father recently made me realise that most people around me might have no idea what I've been talking about above.
Seriously and honestly, did you think the clothing you buy in shops is made by machines?
Well, if you did, you were wrong. There are machines working along the way, but ultimately, it is people who put it together.
Just like anything else as far as I know.
And because it was father who made me think about it, I'll show you on an example of his own area of knowledge and interest.
All photos in this post were taken by me in LOSTR a.s. (recently renamed to Legios a.s.), a factory in Louny, Czech Republic, that makes and repairs railway carriages and locomotives. It was on their day for public, when you could go virtually everywhere in the factory and see how they work. My father went there because - well, because it's his area of expertise and greatest hobby. I went there because I love the atmosphere of these old industrial buildings, and because my great-grandfather on my mother's side worked there. 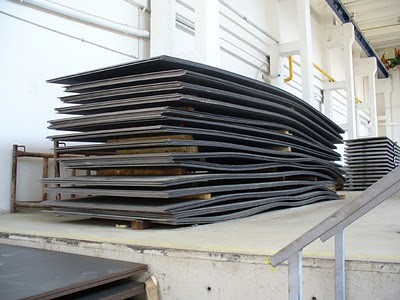 This is the new building, where they have a laser-cutting machine for components (which I stupidly did not take a photo of). These are steel plates waiting to be cut into "pattern pieces". 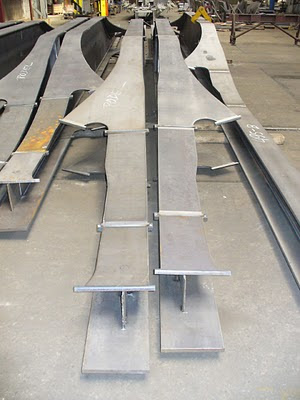 And this is one of the things these "pattern pieces" are put together into. As far as I remember, these will eventually become part of carriage/locomotive underframes. 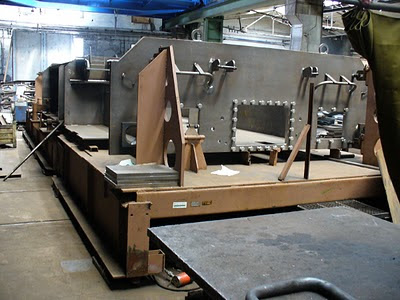 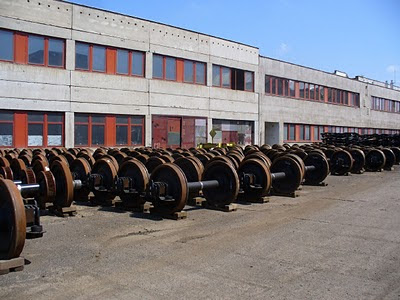 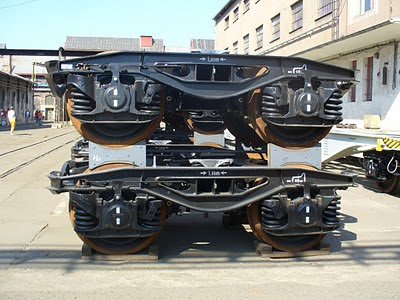 Something like these, I imagine.
I did not take photos of the workers. I felt shy doing that. But you can see people working in a video on the company's site: here.
See what I'm hinting at? There are machines that can do part of the work. There are laser-cutting machines (I hear they sometimes use them in clothing production, too) and there are machines that help in putting the components together (sewing machines, anyone? ;-), but ultimately there are people operating the machines and putting the components together in a sensible manner. And that, my dear readers, is exactly what happens in clothing production.
Which is why there's all that talk about fair wages and sweatshops, and all that jazz, going on around the internet. I imagine people who are putting together carriages and locomotives have a very responsible job, and wages to go with it. Somehow, that does not apply to many other areas of production.
It probably helps when you are a hobby seamstress: you know what it takes. When you're someone interested in locomotives, or deep ocean dwelling creatures, or whatever, the odds are you never even had a reason to think about this issue...
And that's it from me. I don't know any interesting behind-the-scenes details about clothing (or locomotives) production. I just wanted to point out the principle, for people who do not think about it.
(And to give sort of an explanation to people who do not understand why I wear second-hand clothing and bother making my own. One of the explanations possible.)
Vystavil Hana - Marmota v 11:05

Štítky: About me, Musings, RTW (Ready-to-wear)