Flowery details on the Day of the Dead

Or, as the official Czech name "Památka zesnulých" translates, "Rememberance of the Departed".
It's a bit silly, actually, because of the Czech practice of namedays - first names connected to days, which then people with that name celebrate, sometimes much the same way as birthdays (not in this family). There's no name attached to this day in the calendar, which makes people joke about someone named Památka zesnulých.
It is, usually, actually called Dušičky. That translates as "Little Souls". I'm not very fond of either of those names, though that may also have something to do with the fact that my family never visited the graves as others do. That has something to do with the fact my family's graves are all over the country except my hometown.
But I don't think I'd be fond of Dušičky even if we did that. It sounds stupid. It sounds, almost, derrogatory to those Departed.

Anyway. I got reminded of this by Steph's post that draws from the Mexican tradition. The Mexican tradition sounds like lots more fun. Though, admittedly, the 1st of November weather we have is somewhat more conductive to silent contemplation and the lighting of candles. It's 2 PM as I write this, I'm sitting next to the window, and I have trouble seeing the keyboard. I could use a candle. 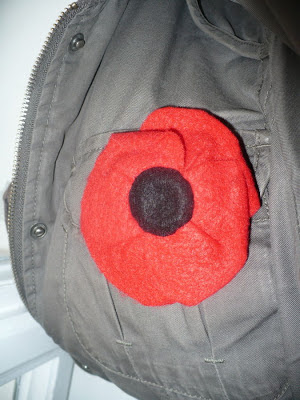 Because the usual weather this time of the year is so gloomy, I wanted to light up my greyish-brown, brownish-grey winter jacket.
I got the idea from Poppy Day (which is not really held in the Czech Republic, though some people are trying) and my thought that people in the Czech Republic should start on the 28th of October already, because that's when the Czechoslovak independence was proclaimed.
But from there, it just evolved into something bright and fun to wear with my mostly dull autumn outerwear (I hate the dullness of autumn outerwear with a passion, yet find myself succumbing to it).
Felt flowers. Poppy in this case, at least till November 11, to honour where the idea came from, but I might make more, from what felt I have. Any TARDIS/cobalt blue flowers you can think of? :P

I'm quite happy with how my poppy came out, though the felt is low quality and behaves a bit unpredictably now. I think I'm going to share the pattern with a tutorial. It's relatively simple, and, if I say so, it looks  much more like a real poppy than the ones I had seen online before I decided just to wing my own. If you celebrate Poppy Day, there's still time to make one. :-)

Quite randomly, I looked over the hi-res scan of this old photo again, and noticed that the bodice decoration actually may be something corded. Cutwork, or cording? Either way, it's still lovely, and I still want to apply that principle to my own clothes one day. 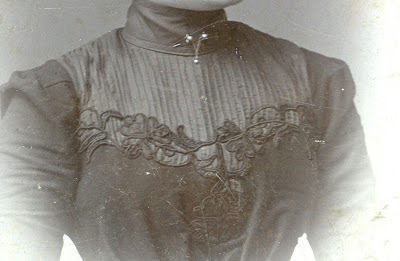 Maybe it's one of the ways to revive something dying in the back of your wardrobe?
Vystavil Hana - Marmota v 14:37