My keyboard had been quite criminally dirty for some time. I always remembered to clean it when the computer was on: not a good time. Today, I finally took a rag, some earbuds and a bottle of ethanol and cleaned it thoroughly. My sister said it would be shining with whiteness. I pointed out to her it was grey. She then proceeded on to joke about it "throwing off grey sparkles".
It's not; but for a while there, I was too shy to touch it. 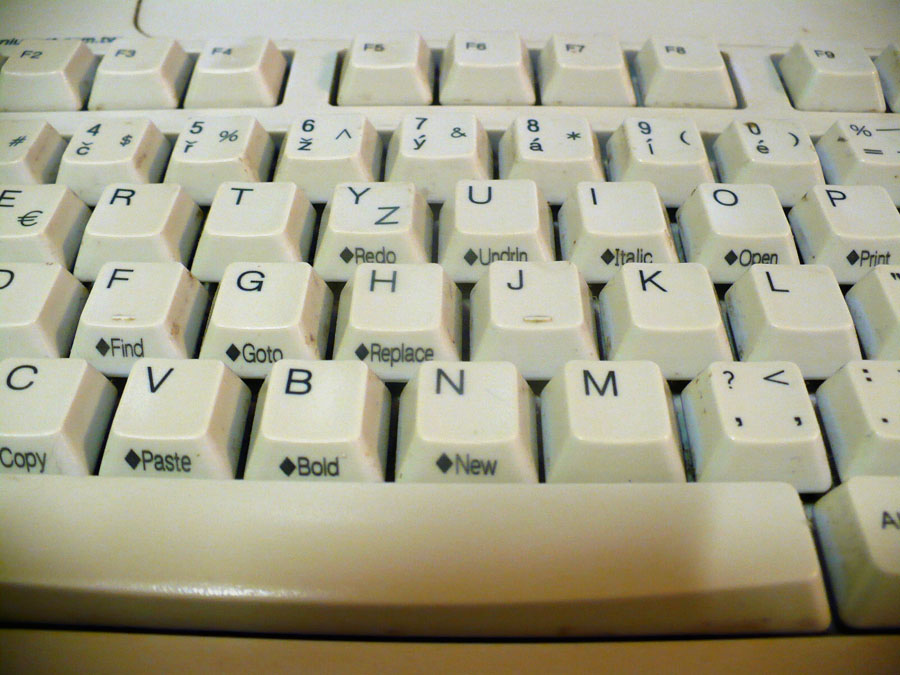 This photo proves there's still some dirt left on the keys; so much for the elevated feeling.

I made tinted lipbalm, with a lipstick I bought years ago for the purpose of painting on strangers. Well, fellow Grammar school students: there's a tradition in the Czech Republic of the so-called "Last Ringing" - the last day the graduation class goes to school, before the graduation exam, is pretty much a celebration. The students usually dress up as something, and bother everyone else. In short.
So, for that purpose, I bought a cheap lipstick that was not really my colour years ago. And the remnant was lingering around the house until I learned online that it could be used for making homemade tinted lip balm... I liked the idea, but I did not like the fact that the ingredients for homemade lip balm could only be bought in larger quantities than I needed for such an experiment, not exactly cheaply (for an experiment). So I bought a larger container of "Jelení lůj" lip balm instead. That's what could be called the most basic Czech lip balm: literally, it translates as "deer tallow", though it's not (at least the list of ingredients suggests it's not - I doubt there's coumarin in natural deer tallow). 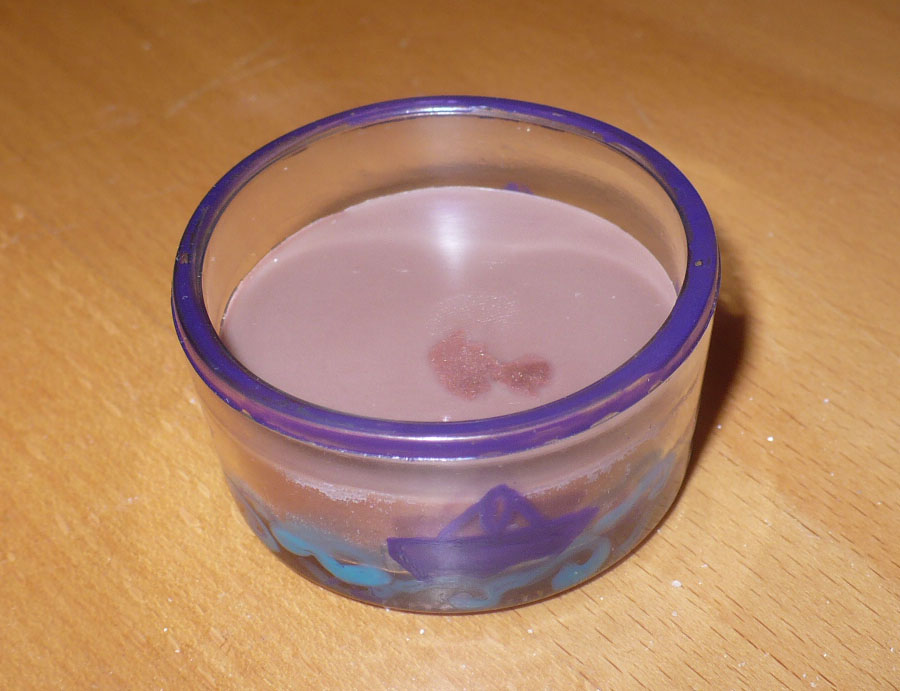 I learned the hard way that pouring melted lip balm into a plastic container was a bad idea (should have realised that); so I used a glass candle holder, incidentally one that my sister has painted. So now I have tinted lip balm in a nautical-themed container. Not bad for an experiment that failed halfway.

I should be reading Language and Gender for school; instead, I'm reading Is It Fit to Be a Realist?, a collection of literature-oriented essays by Ferdinand Peroutka that father unearthed and I was drawn to by an essay on Chesterton. It's much more fun. *sigh*
(Peroutka's answer to that question: literature should always try to describe reality in some way; not necessarily in the "Realist" way, but a literature that does not tell the truth somehow, no matter how, is pointless.)
I can't help it; anything that contains the word "gender" seems to take itself too seriously. It's not that I would not agree with some of the ideas expressed; it's the way it's treated.
Peroutka is able to make fun of himself, like in an essay / piece of literary criticism in which he scolds a young poet (Nezval) for overusing metaphors and diffusing his meaning...

"It is however difficult to give advice to poets. But it is always possible to say this much, that they should, without trifling, try to come to grips with what they feel and think. A poet's aspiration should be essence, not curiosity. The books Nezval and most of his friends write these days are filled with fleeting interests of one or two years and they will be forgotten very soon. If we keep attending to the new things that have arisen and how we can emulate them, our work will only fill literary history's ditches and others will walk over us. A poet who has not lived twenty years in continuation but only in periods of two years is usually lost to posterity. Lest this seem like a mysterious sentence, I will say straightaway that it is a disputation against fashion slavery."

Peroutka was rather justified in his criticism; even though Nezval is a famous poet (I even own a book by him, and I'm not normally one to read much poetry), the book Peroutka criticises is one I have not heard of before. And Nezval was a bit of a fashion slave: he had always had leftist leanings, but after the Communists took over in 1948, he mostly became famous for writing awfully tendentious poems without much literary merit...
I find myself liking Peroutka for liking the same writers as I do; but he is also able to criticise them for shortcomings I usually find myself agreeing with after all, and writes about things I don't know much about. That's good, too.
Vystavil Hana - Marmota v 22:55