Porta Coeli and other things

As I mentioned in the previous post, I visited Porta Coeli recently. What is Porta Coeli, you wonder?

It's a monastery founded in the 13th century, in Předklášteří, which is sitting just next to Tišnov, which is near where Lomnice is. Tišnov's really the centre of the area, though. I'll show you pictures of Tišnov later, hopefully. 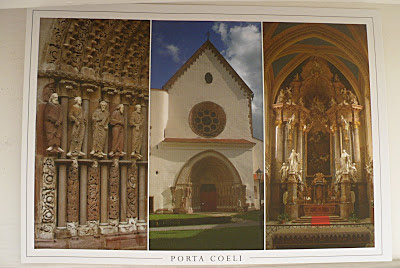 Porta Coeli is a beautiful women's monastery built in the so-called Burgundy style, which has nothing to do with the colour and, as far as I know, everything with the country. Anyway, the point is, it's an architectonic style that combines features of the Romance style and the Gothic style and makes for a very, very pleasant whole.
Of course, there are later features added; e.g. the altar in the church is Baroque.
But the church in question has a beautiful portal; famous, too, at least in the Czech Republic. You hear it mentioned all the time, when Gothic architecture is discussed.
It's very much reminiscent of the church portals I've seen in France; rightly so, as it's a French style.

It was raining rather heavily on Saturday when we visited, so I could not take any photos from the outside, and photography's not allowed on the inside. So no photos from me, just that postcard.

There's also a museum, with an exhibition that explains some of the history of the monastery and an old collection of minerals and fossils upstairs, situated in a narrow corridor, so it looks a lot like some kind of slightly neglected school, and houses fascinating specimens from all over Europe and maybe further. We nearly missed our train back.

The entrance fee is hilariously low. With my ISIC student's pass, both entrance fees plus the postcard cost me only 42 CZK. That's about... a loaf of bread and a cup of rather dismall coffee from a vending machine, to give you an idea. Or just a little bit more than a small kettle of honey-sweetened tea and a sweet treat in a shop in Tišnov.

And to end on that light note... This is a fun photo from their photogallery: "Sister with brother snowman"

As I also mentioned in the previous post, I'm reading Emma for school. Emma was one of the books by Austen I had not read yet. (My naming my sewing machine Ema had nothing to do with it. No irony.)

Emma's enjoyable. Though I think I would not have enjoyed it so much earlier, without having read some other things first.

I'm still, shame on me, working on the blue-grey medieval dress. It got set back by the unpleasant discovery that, for some reasons, the sleeves I spent so much time perfecting are actually a tad too tight when made up. Now, anyway.
I'll have to do something about that. It just lay around somewhere for a long time, a little disappointment, pushed away by other projects.

Now it's in the work again, a portable (if somewhat bulky) handsewing project; but I'm working on the eyelets.
I love that I can make such neat eyelets, and I love my little triangular/arrowhead tacks. My first time making them. It's fairly intuitive. 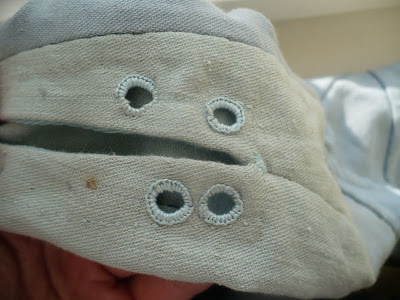 It's why that TARDIS blue box I mentioned in the last post is lying around.﻿
Vystavil Hana - Marmota v 21:14