I finished part of the blouse part of my sister's dancing costume (which, it turned out, she really wanted to be the tunic part of a salwar kameez, for increased universality, so that's what it became); but I don't have photographic evidence, which is waiting for when it's all finished. I still have to make the vest part to fulfill my birthday gift promise to her, but since she left the tunic in Brno and I cannot muslin over it now, it will happen later.

Now, I'm remaking RTW - in the completely-rip-apart-and-sew-into-something-else sense: a 75% wool - 25% nylon skirt that I got for 10 CZK in a thrift shop and wore only once because it soon became too tight for me. Re-sewing it into a (modern-day) spencer, which does not exactly go with the spirit of the challenge; it's frosting in Marmotaland. (And of course it's grande-assietted.) But since Marmota's idea of frosting is a bit closer to someone else's idea of cake, I don't feel too ashamed about it; I'm using up stash, too. I'll probably have to piece like mad in some places to squeeze it out of the fabric I have (the main reason why it's frosting and not cake: a spencer and not a full-blown jacket). But it's still a very lucky project, which will hopefully hold until it's finished.

Lucky as in, I got wonderful mostly wool fabric for the very, very ridiculous price of 10 CZK, lining plus spare invisible zipper included, and already have the perfect buttons in my stash (and should already have violet buttonhole silk, too, though I cannot locate it right now). 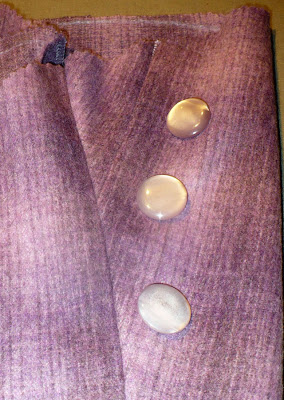 Lucky as in, rather flu-dazed Marmota pieced without thinking and still managed to match the plaid. 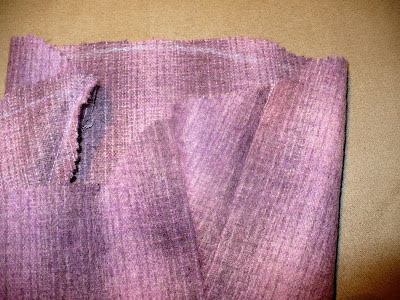 Lucky as in, this fabric is an absolute delight to sew with, and makes me wonder what an even greater delight it would be to sew with a 100% wool fabric of a similar kind.
Vystavil Hana - Marmota v 07:30