Progress for my medieval dress!

Once upon a time, I started mocking up a medieval dress (called cotehardie, cotte, something like that) from old bedsheets on myself. Draping it on myself. With no previous experience in draping. I'm crazy like that.
After three or four or how many mock-ups, I managed to arrive at something quite usable. Or almost. 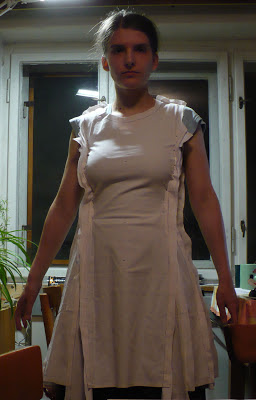 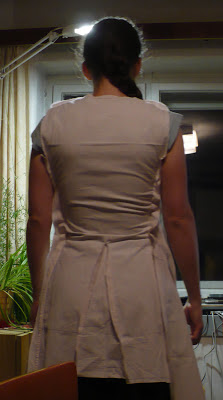 It works in the front. It did not work in the back.

And I left it like that for over a year. *phew*

Now, thanks to American Duchess' post on a 17th century jacket - with gussets - I realised that her problem might be my problem, too, and started playing with the back gusset. In the end I decided to drop the center back gusset altogether and go with side gussets just like in the front, because the center gusset creates strange kind of drape in there. But it all started with the Duchess' post, so - thank you very much, again!

Now I'm going to play with some sleeves options.

And after that is figured out, I'm going to make a wearable muslin out of that blue-grey fabric from my grandma (remember, I have heaps of it). The point of making a wearable muslin in this case lies in
a) figuring out how much fabric it actually eats up before I cut into my silk (and eventually making amends if it turns out it eats up too much), and
b) having a version of it finished even if I don't manage to finish the silk dress by the time of the local festival. Because I really do not want to wear my first, poor, Halloween-y attempt on a medieval dress again. (It was made for a party in the second-to-last grade of Grammar school, so technically it's not a Halloween costume - but I did wear it to a Halloween party, too.)

Oh, and then there's
c) having something for the Historical Costume Inspiration Festival. Because I think this is much more doable than the 1848 jacket AKA kacabajka. For one, our local notions shop does not carry soutache, so I'll have to obtain it somewhere else. For two, for the jacket I'd have to make completely new mock-ups, while this thing is already mock-upped. For three, this is an even older inspiration than the 1848 jacket: 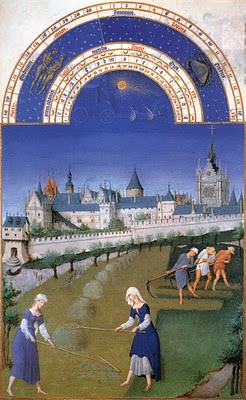 It's Les très riches heures du Duc de Berry: Juin by the Limbourg brothers, and the image is taken from the Web Gallery of Art, but I first came across it in Kybalová's book on medieval clothing, which was the second of her books I've got (the first was ancient clothing). So that was long before I set my eyes on the 1848 jacket.
With my love for blue and white, I naturally fell in love with those dresses... They're work dresses, worn in the fields, but from all I know, they're the basic shape used for all classes, so I think it can work for a townsman's daughter as well (that's me, if you didn't realise). I plan on making the silk dress with detachable lower sleeves, so that I can wear it long-sleeved for the festival, and short-sleeved to church or somewhere else in real life. So yes, those short sleeves work for me, too.

I'm getting really excited about this. Especially about the fact I'm going to make something that works for me on so many levels... I'll use the mock-up dress as a workdress around the house, with the possibility to wear it to the festival if I do not manage to make the silk version in time. It's going to be my favourite shade of blue. It's going to have a fun, long, flowing skirt. And it's going to be a delightfully subversive dress in my own way, a medieval dress worn in 21st century.

(Oh, and remember the rust-coloured velvet? That's going to become another incarnation of this dress. So is, hopefully, the Marimekko print. Now that's going to be one fun, delightfully subversive dress, guaranteed!)
Vystavil Hana - Marmota v 06:29