I'm still working on the chemise. I wanted to finish it by the end of June, which I did not manage. But now it's only the neckline and the bottom hem to go. So, right now (or, more exactly, few moments ago), I'm sewing together strips of bias-cut fabric to sew at the neckline, while watching Alarm für Cobra 11 and feeling slightly dizzy at it.
(Funnily enough - remember the film about apostle Paul I mentioned in one of my previous posts? Well, it turns out the actor who played Paul also played one of the main characters in the first season of Cobra 11. Only in the first season; he left the show after that. I only saw one episode from Season 1 and I personally think the actors who came after him were better suited for it. So, well.)

I went to the post office this morning, for a letter, and while I was in town, I bought some notions (short zippers for eventual new versions of Andrea or something - one pink, for the flowered seersucker) that were on discount, and dropped into a thrift shop. That didn't go so luckily. I found a lovely pair of vintage-y modern shoes - too small. Plus two drapes with pretty print that would be suitable for eventual Regency dresses - cotton/polyester blends. Eugh. Thanks, I won't take that. So I felt a bit disappointed about that...

The Very Pink Poplin is probably some kind of blend. More on that later, perhaps. (I seem to be promising that very often, did you notice?)

Here are the promised treasures: 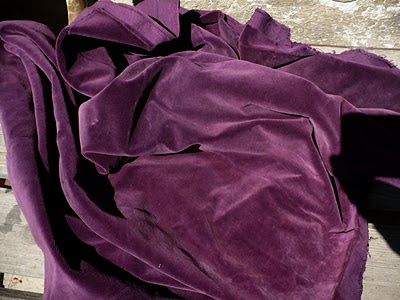 Purple velvet drape-thingummy. It's a very, very pretty colour, but the person who made it into the drape-thingummy sewed a number of pintucks on it - on the wrong side. To attach some rings for the draping. So now, when I rip the seams at the pintucks, there are stripes of different texture (and colour) on it. Still, it's lovely. I thought of making a short-sleeved spencer out of it (if such thing existed), but then I decided it'd be better to make it into covers for some of my favourite books. You know, I really like books. And some of them really deserve pretty covers. 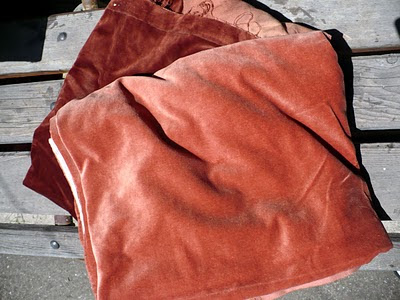 And more velvet, two rusty hues. I really, really want to turn these into a dress for winter. Something to wear to church and similar places. Based on the medieval pattern I'm draping for myself. I really think it would be lovely. I only have to figure out how to make it look not costume-y, just unique.

The velvets seem to be cotton or rayon. Certainly not the melting kind of artificial. Fantastic.

There are still more fabrics, but I do not have good photos of them, because the light changed after that. It's VERY sunny and very hot now. :P I want some rain!


Oh, and while I did not score at the thrift shop today, I did on Thursday, in the bookshop. I got C.S. Lewis' Four Loves. In English. As good as new. For 50 CZK.
Remembering that makes me realise that the shoes and drapes of today were far less interesting finds.
(I also got Hiawatha that day. Czech edition from 1952, with pretty patterned cover and Native-American-like illustrations. For 45 CZK. And the other day, a thick Hungarian-Czech dictionary from 1910, in perfect condition, for 80 CZK. I love that bookshop.)
Vystavil Hana - Marmota v 15:12