The idea was to write about the Wallachian costume, a sort of "what it involves" post, but... today was taken up by other things, and the big project ended up being this: 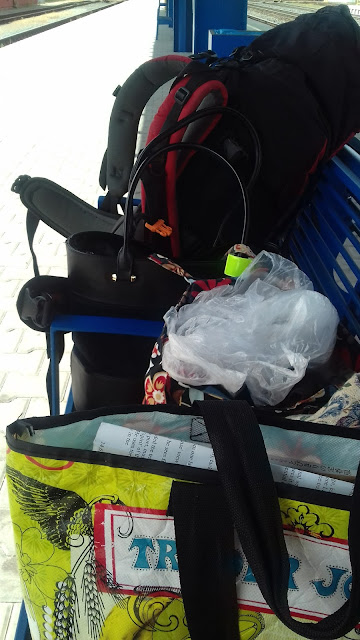 Hauling things from my old home. Things like a bale of lining fabric. All my skirt slips. A set of IKEA bedlinen with an 18th century print - turned fabric. That sort of things. One full backpack and three full bags if things, not counting my regular "handbag" bag here (also full). 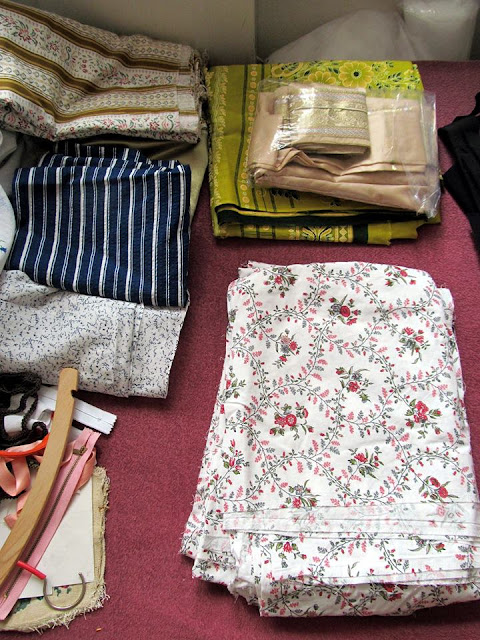 Hard time deciding what would go and what would stay behind. Concrete ideas won over vague ones, and I took the fabrics on the right in this photo.

The IKEA print will become a dress. So will the green sari (finally, I hope). The nude-coloured used to also be a sari - the idea was also for a dress. It's polyester, though, and for that and other reasons, there has been a change of plans. But plans there are.
The little bit of black you can see on the very right is remnants of fabric from my Little Black Dress. After several years of very occasional wearings, alas, the sleeves started unraveling, so I was thinking of repairing / replacing them.

The exhausting expedition (ugh, I've never hauled so many things at once, and I never want to do it again) was crowned and rewarded with a concert of Druhá Tráva, whom I've wanted to see live for a while now and kept not managing to; so in a way, it was also a big project.
I have no photos of that, although I could have taken some, easily - I sat in the first row! It just felt... disrespectful, somehow. I was there for the music, not to take photos.
They're the sort of musicians who just sort of hang about on the stage, and produce incredible sounds while doing that. Who make it look easy, except clearly it's not...