That is, for those unfamiliar with this online sewing jargon, UnFinished Objects.

I have a lot of those. Some aren't here with me.

Some are. So here's a selection of my unfinished object, to take a stock of the making before it's done, fingers crossed.

Or not. The purplish "modern" spencer never got finished. 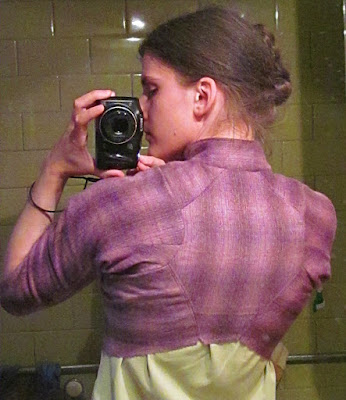 It's all the fault of my enthusiastic unresearched patternmaking; I'm now too bothered by the fact I put the deep-inset armscye in the front as well as the back. 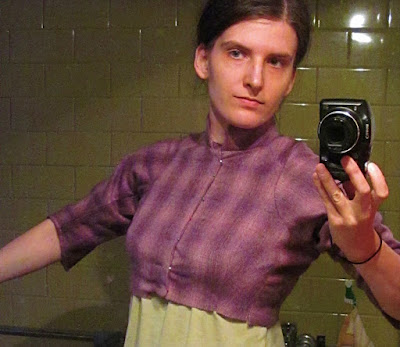 Not good for the period, and bothering me in this modern-constructed garment as well.

It's a pretty good fit, though (although it could no longer fit with a button overlap), so it's a bit of a mock-up. A starting point. 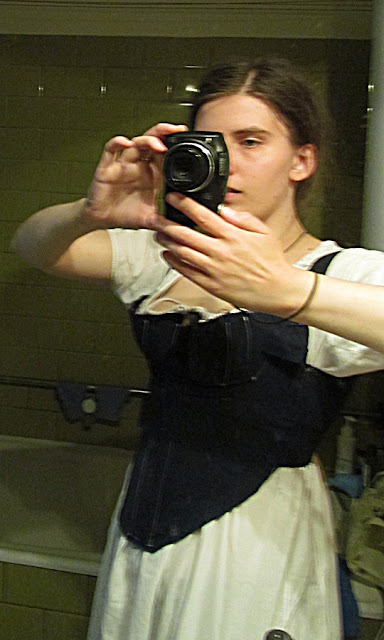 Way better than mock-up Nr. 1, which I'm soooo not going to show you, because it didn't fit at all. That was how I found out that only one bust gusset for a DD cup was a bad idea. That volume needs to be distributed more evenly, without all the strain being focused on one point. And it plays havoc on grainlines, so I ended up with a lot of wrinkling and buckling etc.

It's still not completely good. I'm thinking of slanting the inside gussets, or moving them closer to centre front, because there's still some odd wrinkling happening there that I think could be taken care of with a change of grainlines. And I think I need to play with the slant / attachment of the side-front and straps, too, because there's fabric excess there.

Also wondering now if I should try cutting the front on the bias, like in the Bernhardt diagrams. Namely, the diagram C - the basic shape is very similar to it, after all. Maybe that would take care of the problems I'm having, too; so I might start with that.

Also in the realm of underwear, conical stays teetering somewhere on the edge between late 1780s/1790s, and a folk costume bodice (Central Bohemia, specifically). 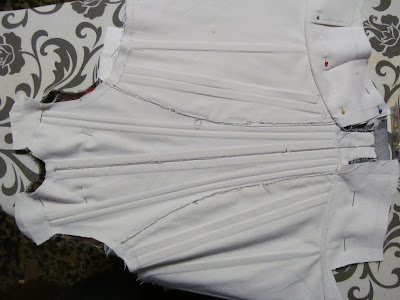 I am more and more drawn to earlier transitional styles, so I sort of set out to experiment with it from inside out, cheating by machine of the inside layers. Considering how long it took me to finish my Regency stays, by the time I'm finished with these, I might even really be ready to move into the era! 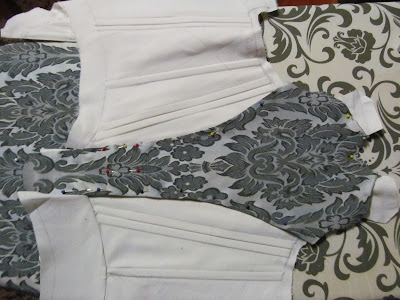 The fabric I'm covering it with is probably more late 17th than late 18th century, I'm afraid. Let's pretend it's a re-use.

I didn't get beyond sewing two rectangular pieces together to create the skirt portion, and pleating the cetre back. Which, in retrospect, was probably a wrong order of things? 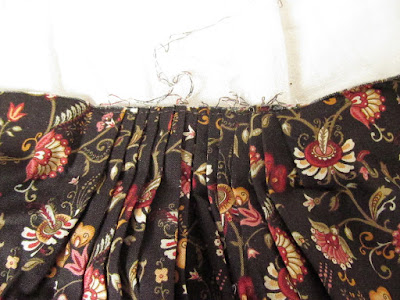 It's a quilting cotton that's not-entirely-correct-but-good-enough.

I've found an extant original that's a good example of what I have in mind, so I have something more solid to go on now. Although now I look more closely at it, I realise the skirt is cut together with the bodice. So it won't be entirely the same anyway. :P

This cutting layout is actually something I'm already wearing. I think the skirt in question needs to have its pocket openings taped, though, something I forgot to do... 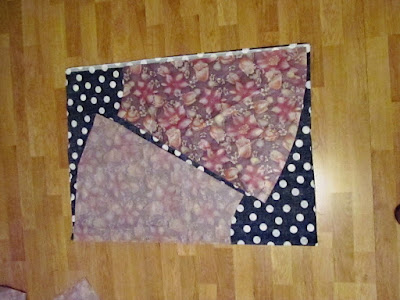 Note: that's not flowered fabric, that's flowered tissue paper. Something was wrapped in it once, I think. Now it's become a pattern. A 1915 pattern (although adapted for my modern uses, with the introduction of side seams.)

Also in the works: another pair of Moravian-Wallachian socks, this time actually in wool. 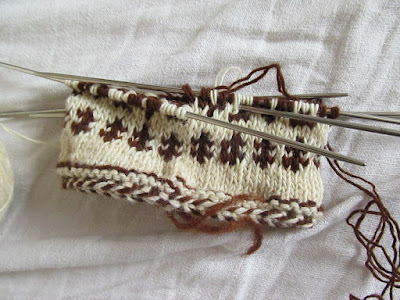 There are more things in progress. Too many. And more ideas of what to make. Still, I think it's overall a lot better than this time last year, with things I have actually finished (though not yet posted about), with a lot of the ideas with much more concrete outlines, and with some concrete ideas for some fabrics that had been lingering in the stash for years.
Vystavil Hana - Marmota v 09:10