It's time for some explanation of terms for things to come. 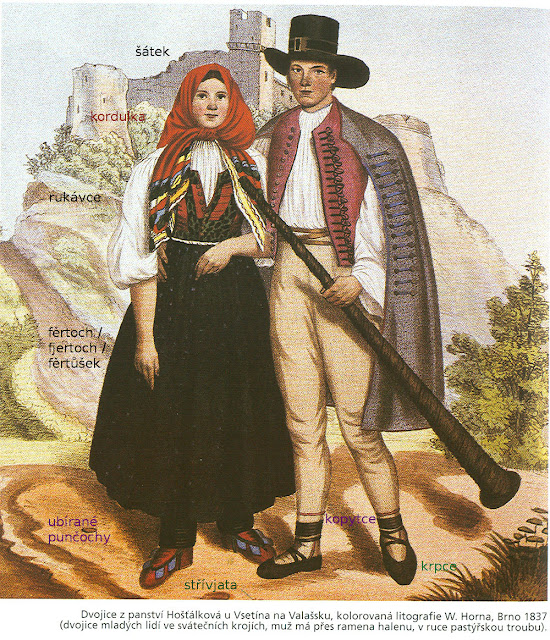 And things not to come, at least not any time soon. This post is also a bit of a stand-in for the Historical Sew Monthly August theme of "Ridiculous." I have the ridiculous thing - I'm just not going to make it now.

This was the first historical image of Moravian-Wallachian folk costumes I ever came across, in Langhammerová, Jiřina: Dějiny odívání - Lidové kroje z České Republiky, Lidové noviny, Prague 2001. Annotations are mine.

Some things are fairly obvious; šátek is šátek (kerchief) everywhere, one learned about the shirt called rukávce, the bodice / vest called kordulka, the apron aka fěrtoch, one even knows of the traditional leather shoes - krpce (though I only learned the socks worn into them are called kopytce later).

What left me puzzled was the woman's leg- and footwear. I thought the author was applying some artistic license there. It looked ridiculous.

Years later, I found out he did not use artistic license; when I came across the book Lidová oděvní kultura by Alena Jeřábková (Masarykova univerzita, Brno 2014). In there, I finally learned more about Wallachian folk costumes in history. And that the black things on her legs were a special kind of stockings, called ubírané punčochy.

They were made of dark wool (not just black), originally cloth, later knitted, and they were very, very long. And then gathered / scrunched up, and felted, like so.

It's part of the reason I'm not going to make them: I have nothing to gather and felt them on. (The other reason is: ridiculous. And not worn with the folk costume anymore nowadays, so it would be just a historical experiment I don't have time for right now.)

The shoes are also correct, if slightly distorted. They are called střívjata, which I believe is just a dialectism for the general Czech střevíce. They are made of wool broadcloth, with latchets that don't overlap and tie with ribbon (which is what those blue bits are in the picture) or cord, and an often long tongue that folds over the top of the shoe. 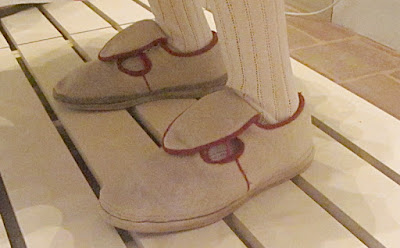 These are from Valašské Klobouky; photo was snapped by me at an exhibition of Moravian folk costumes in the chateau in Strážnice. 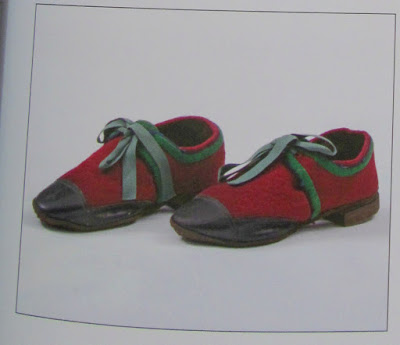 These are from Luhačovické Zálesí - a region that lies between Wallachia and Slovácko, both geographically and style-wise - the folk costumes are very similar to some Wallachian regions, so I guess it's a bit difficult to tell where one ends and the other begins. The picture is from a visual guide to that exhibition in Strážnice.
Vystavil Hana - Marmota v 10:28