Janul's new overlocker (and Janul herself) reminded me I have not shown you my new sewing machine yet.
So here she is, in all her baby chubbiness and baby colours. 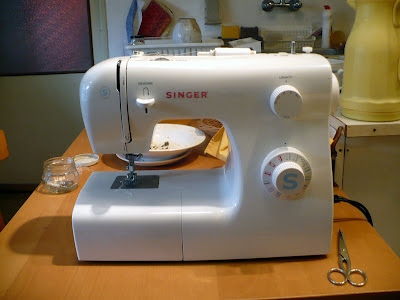 She IS a baby, compared to the old treadle Singer sitting outside under a plastic cover and a pile of wooden palettes. I don't know much about the old Singer; it's allegedly not working. One day, I will pull it out and find out, but for now, I have Ema.
She's even a baby compared to the Lucznik. The Lucznik did not have a name; it was the one and only sewing machine I knew, and it was so mechanical and so well-worn that it did not need a name; it had a personality on its own: a bit too stubborn but a hard worker (and while we're at it, it's a he). But then this shiny smooth new thing came along and needed a name to fit in. So it became Ema.
Ema, because Ema is a favourite name with alphabet book writers, and she's such a baby.

Ema is a Singer Tradition 2259. The "tradition" part is rather ridiculous, but I'm not complaining. It probably means it's not computerised; that, for me, means it's very similar to the Lucznik (which, mother tells me, was pretty much an Eastern block Singer knockoff). So using it is quite intuitive for me. AND the bobbins are interchangeable.
Sadly, the feet are not. Ema has flashy modern snap-on feet. Like, you know, ballet flats. Lucznik's feet are screw-on, strurdier; like combat boots. Thus, unfortunately, Ema cannot do the gathering that was a blast with one of the Lucznik's feet. And Lucznik's zipper foot is much better than Ema's.

But Ema's got a scallop stitch.

Lucznik's backstitching was much easier. The "lever" held in place on its own. You need to hold Ema's "lever" in place yourself, and you kind of wish you had three or four hands when you do that.

But Ema is portable.