(OK, so maybe the happiness part doesn't work for everyone, but I had to make up a title for this post, you see?)


Have you by any chance seen Neil Gaiman's library?
Neil Gaiman's quickly become one of my favourite authors, and favourite person(alitie)s. For things like his blog, full of links to interesting things I'd otherwise never learn about, The Graveyard Book, keeping bees (which I've never done, and probably never will, but totally consider a normal thing to do that most people unfortunately don't do anymore) and liking G.K. Chesterton. And his library.
When I first saw the photos of his library, I thought "wow" and "how did he achieve that?"
Then I looked at my room and thought: "He's just older than me. When I'm as old as him, I might need a library like that." 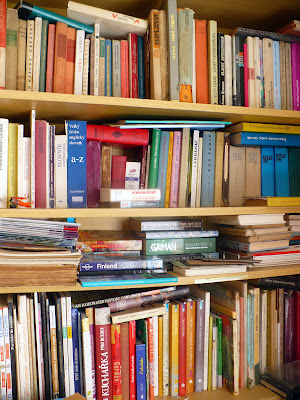 Not all of these books are mine (some of the dictionaries are family-owned), but most of them are. They don't fit in. This is only one of three bookcases/shelves I currently occupy. The books still do not fit in. The detective stories are cheerfully overflowing their alotted space (and I only limit myself to five writers!). The collection of Czech classics is inexplicably growing. The interview books and historical novels squeezed between the dictionaries are just that: squeezed. My books by Finnish authors are forced to democratically (but not always equally) share space with my comic books. The sewing and crafty books groan under the weight of Russian and British history (but Russian history is much heavier). One more Gaiman and I'm done for...

I'm slightly envious of my sister's new tidy bookcases. But it's only thanks to them that my books do not threaten to kill me anymore. 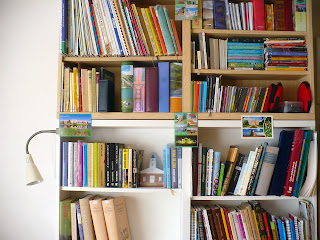 See? Tidy and pretty. I can't keep mine that way. I just can't help it. Books keep entering my possession.

For one thing, the local library keeps selling off old books, duplicates, for 1 CZK a piece. THAT, my dear readers, is not a bargain. I don't think there even is a word for THAT.

And they started another project: people can bring their duplicate or otherwise unwanted books there. They either keep them in the library, or put them into a bookcase outside the library, where people can pick them for free. How cool is that?

As a result of having a fantastic local library (which I have every intention of supporting; how many small town libraries keep lots of Baltic literature?), my own library is growing. 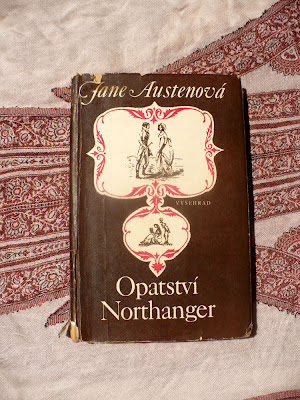 I don't think you have to speak Czech to recognise this. 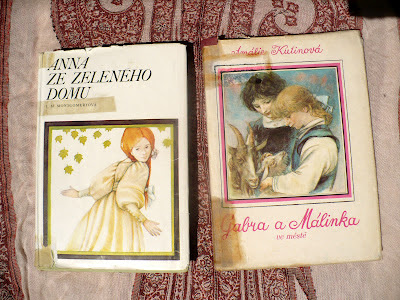 Anne of Green Gables and her Czech counterparts Gabra and Málinka 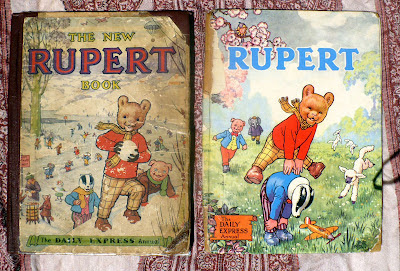 Rupert was new to me, but apparently he is quite big in the English speaking world. About half a year ago, I saw a reprint in the English section of a large Prague bookshop. So yes, they are worn and tatty, but they're the original from 1950s and I am so lucky to have them. 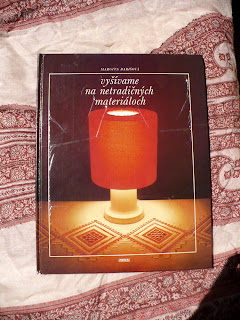 This 1983 Slovakian book on embroidery has one of the most "unappetising" covers I've ever seen. (A book on embroidery and the largest part of the cover is filled with a lamp?! Not to mention the awful composition of the text in the image...)
Inside, it's droolworthy. 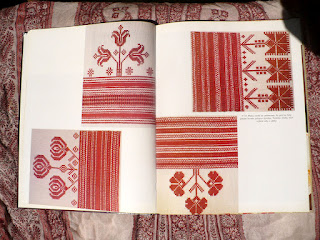 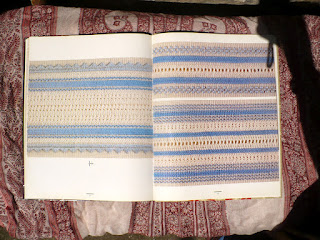 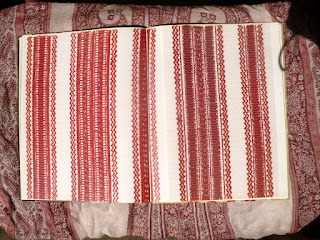 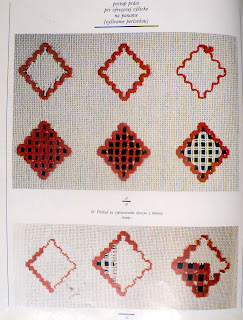 It even shows the wrong side of the embroidery techniques!

Last time I visited (Tuesday), I bought Murder at the Vicarage by Agatha Christie, four books of the Truth and Justice pentalogy by Anton Hansen Tammsaare (sadly, one was missing) and one more book by him. I'm well on my way to needing Neil Gaiman's library.
Vystavil Hana - Marmota v 01:46