The wedding I mentioned in one of my posts has come and gone and now one of my sisters is a married woman.

They had a beautiful, beautiful wedding. The minister - the former minister of our congregation who is now on maternity leave with two children, expecting another - had a wonderful sermon, based on Colossians 3, 13-15... the awesomeness of which I cannot duplicate now, but it spoke of forgiveness and the possibility of being a beacon of love to the world. I hope they will be!

And my sister looked amazing. I won't show you photos of her or her husband (unless I get a permission - EDIT: So you can see them HERE), but I think I can safely show you a photo of her hairdo... 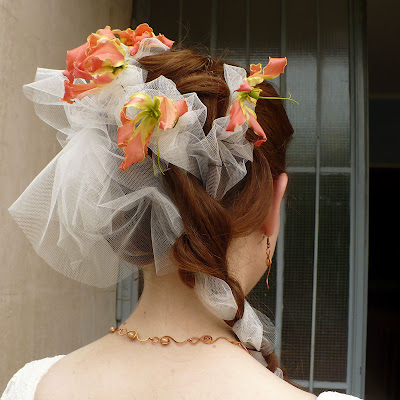 Other than this creation from a hairdresser (which, we've agreed, looked a little bit Regency-ish), she had henna-ed her hair to match the orange theme of her wedding - orange is her (actually, I think their) favourite colour. She had an orange ribbon sewn to her dress, again in a bit of a Regency fashion (empire waist), and copper jewellery and, well, looked amazing. :-) Oh yes, those were real flowers in her hair, I think gladiolas?

There were many guests on the wedding - the church was full; they have many friends and, of course, the families are not small either (even though some people were ill and could not come). There were also many children - even on the smallish almost-family-only dinner before the wedding (after the wedding there was a big party for all the guests). And because they had so many guests, they also got many wedding gifts... mostly useful ones, because they had made a clever online list beforehand. 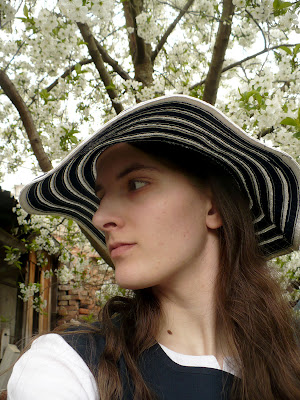 I wore the Miss Barbora outfit minus the yellow belt - in the end. Both my parents told me the style of the belt did not go well with the rest of the outfit. It was good advice, I think. I also think I got more compliments on my outfit than I have got in all my previous life... there were only two other people wearing a hat, the minister (not during the ceremony, naturally) and a girl about 10 years old. People kept photographing me because of the hat. (Obviously, this photo is not from the wedding. No cherries in blossom anymore - now the elderbushes are blossoming!)

I did not take many photos myself, because there were several professional photographers (one of them was the groom's brother) and, well, it was nicer just to enjoy it and talk with people I hadn't seen for a while. We did not get much chance to speak to my sister and her husband on the day, because there were so many other people talking to them, but we met with the family the day after and got more chance then.

And it was such a huuuuge event that I'm still trying to make sense of it. I simply cannot tell you everything.


(Oh, and as a more than little side effect of the wedding, I now have a new sewing machine. It was intended to be a wedding gift, but in spite of the clever online list, a complication arose and uncle & aunt bought a sewing machine, too... Because my old machine has been acting up, the surplus machine went to me.)
Vystavil Hana - Marmota v 17:41