The Researcher's Curse, and Blessing 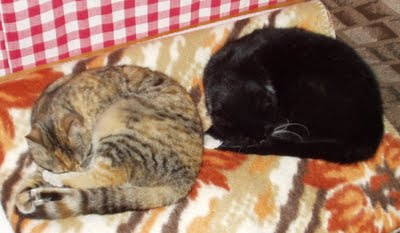 This will be a meandering post, as evidenced by the completely unrelated photo (our cats Lev and - I think - Lisha from back in 2004; I've just found it in my computer. Also, I wish the pictures I upload into my posts were not disrupting my paragraph formatting, but fact is they are).

If you have any experience with a kind of academic research, it might have happened to you, too. When looking into something you're really, reeeally interested in. It's happened to me before, on Grammar school, when I was writing seminary work in History. I chose to research into Old West and Once Upon A Time In The West. Kind of a dream come true, being able to write about such thing. The problem is, when you really love your subject, you get distracted. In case of that seminary work, I kept looking into more and more resources and couldn't bring myself to start writing.

What's happened to me now is almost the exact opposite.

I'm attending a course on American literature in 1865-1910. One fact caught my attention, that Stephen Crane was Methodist - or at least his family was - and that it might have found a way into his writing. The article I found about that concerned his city stories (I'm not familiar with them - yet), while I thought there was quite a lot of that in The Red Badge of Courage (which we read for the course), too. So I'm looking into that. We are supposed first to write a paper proposal, and then the research paper/essay proper. We were supposed to upload the paper proposal into the online system by noon today.

Well, as I said, the opposite of my seminary work situation happened... I got carried away and wrote good three pages of an essay before I realised that it was almost 2 PM and I hadn't uploaded the proposal yet...

Really, a researcher's curse. Sometimes it's easier to write about things you're not interested in. When you get interested, it's hard to do what you're supposed to do.

And sometimes, I think, it's the same case with some of my crafting projects... I think I should be glad I'm also suscpetible to occasional spurs of spontaneously heading into things - headfirst. It often results in unfinished objects - sometimes because they cannot be reasonably finished - but were it not for it, some things would never happen.


Speaking of Methodism, I found this book online - Methodism by H. B. Workman, published 1912 - and this quote by John Wesley:

The best of all is God is with us.