Experiments in woven bras, Part 1: The reasons and the initial process (and mistakes)

I've been fed up with RTW bras for quite a while now. The ever-present artificial fibre (even if the bra is mostly cotton, the various findings are not). The fact that I'm nominally one size but then when I try it on the cups are gaping. The fact that I have to keep searching for styles that are both as much natural fibre as possible and a cut that does not result in gaping. The annoyment of the sliders of adjustable straps often ending up sitting right on top of my collarbones, which can be a lot of fun (insert sarcasm) especially with a backpack on top.

I first started out, years ago, basically trying to replicate RTW underwire bras, and it never worked out. Eventually I found out, thanks to a random commenter in the Curvy Sewing Collective Community group on Facebook, that part of my problem probably is that I have Omega-shaped breasts - or something of that sort, anyway (what that article describes doesn't fit me on all counts, I also have top gaping and have never struggled with the bottom of the bra sliding that much; but more or less it does fit). So the standard cup setup probably simply doesn't quite work, even if I had managed to get it "right". (If you do not have that problem, and want underwires, I think the free Maya bra may be a good starting point for that sort of thing - the author says the whole front of the pattern can easily be made without any stretch, so if you combine that with some sort of vintage-style elastic setup in the back, you're probably good to go.)

(I would have shown you my most recent unsuccessful wearable muslin here - complete with self-made bias channels for underwires - but I think it went into the rubbish bin during last year's move. It did not sit right. It did at least serve to drive home the fact I really want to wear woven natural fibre bras in summer.)

And then last year I came across this review of the Vera Venus 1940s bra and realised, over that bra's clearly fabulous support, that proper vintage-style bras might be a much better solution for me. Especially because I had been wearing exclusively wireless in RTW bras for the past couple of years anyway and my absolute favourite, fit-wise (sadly not material-wise), was this rather vintage-style number from Marks & Spencer. 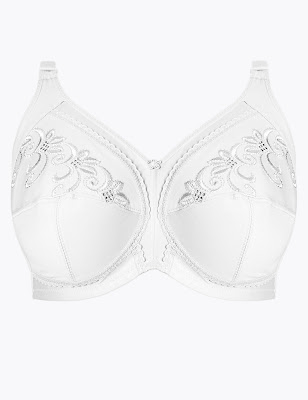 I lifted this image off the interent somewhere; maybe the Czech M&S site. I normally don't do this. But links break, especially shop links, and I want this blog to serve as a record for posterity and to help people regardless of when they find it. And this image shows the seamlines in relation to fit relatively clearly.
Note: shaped cups, fabric around them and full coverage, and - as you will see bellow - taped seams. Those seem to be the crucial elements of support in here to take note of. Also, note central front seam. I don't know if the "grainlines" there also serve a purpose but what is certain - that seam is also taped.
It's wireless but it's not woven - I think the cups are some kind of tricot knit? They say it's part cotton and therefore nice to wear. Don't believe them if you have skin trouble and sweat trouble. I definitely sweat in it unpleasantly when it's hot.
So, as you can see, the seams are taped. With something that definitely isn't cotton. There's also some kind of mesh fabric under the cups on the inside (it does not look like the power mesh I google but presumably it serves the same purpose). Also definitely not cotton. Aaaand exposed bra elastic. 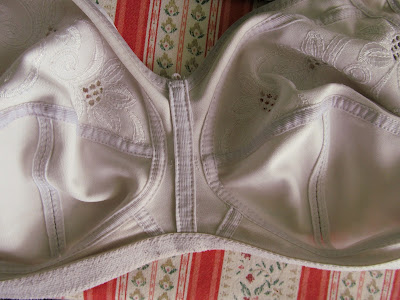 Sadly far from ideal in my world, even if it is much better than anything else before, and very instructive.
So I:

Bra calculators tell me, right now, that I ought to be 30F or 32E in UK bras (my underbust measurement is currently closer to 29 inches, BTW). Which I'm pretty sure would gape a lot in reality. I wore 32DD previously; the bra I have is 34D (I could not find 32DD in the shop when I bought it, so I did the improper thing of buying the upper sister size and wearing it on the farthest set of hooks). It's gaping in the cups now (and as you may guess from the above list of sizes, the band must be too big now). Presumably I could get away with a C or D in this style now?

But: material. I used not to have such a big problem with blend bras, skin-wise, but during the last year I got rash problems in the bust area as well. I don't know, maybe it was the stress of the past year - apparently atopic ecsema gets worse with stress, and let's face it, the past year plus has been... A Thing.

So. Time for more bra experiments. Especially because summer's here and the knit and partially-artificial RTW bras I have, currently also badly fitting, just really don't cut it anymore.

I drew on my knowledge of historical bras - from the Lengberg style and Katafalk's recreation of it through 1910s princess-seamed bras to 1920s and 1930s bras - and took lots of measurements and made an initial draft that I then refined the fit of in a muslin (considerably).

It turns out, as I sit down to document my process, that my initial princess-seamed draft does not exist anymore. Nor does the subsequent muslin-influenced draft because the garment that resulted from that is still faulty. In an attempt to be a good girl who cleans her room, I threw those patterns away immediately upon their becoming obsolete, without documenting them. Oops.

Anyway, here's my back piece, derived from my sleeveless spencer, which exists still mostly unchanged - I just took it in a tad from the top of the underarm area for better support, and I think I scooped it down / out in the underarm / armscye in general? The side seam sits a bit more towards the back than directly under my arm, incidentally. I didn't bother correcting that; it works better with the grainlines this way. (There are additional straps connecting the front and back, BTW.) 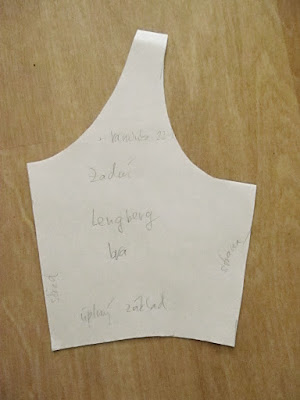 And this is my initial Lengberg-style front piece, not yet muslined, which is basically where I started - by drafting this flat piece out of my measurements, with breast cutouts, because I could hold that against my chest and roughly "test the fit" even in paper. (Considering my further fitting problems, I suspect this is inaccurate.) 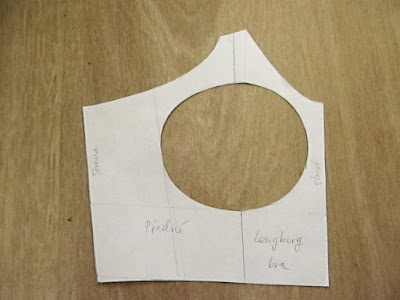 From there, I drafted two princess-seamed pieces following that vertical line, both with a "bulge" for the bust, based on measurements of my breasts.

And then I made a muslin of that, with a front opening, and pinned and pinned. The bulge was reduced, more so on the central front pieces, but really both of them. I generally took in the seams for better support.

So I think you could basically arrive at a similar thing just by starting out with a vertically princess-seamed pattern for wovens, exactly as The Dreamstress recommends for 1910s bras.

I made a wearable muslin with lacing in the front (that will be Part 2), and found out that, oops, my muslin fabric was an old bedsheet and old bedsheets have considerably more give than new fabric so I had taken it in too much, especially in the underbust. Fortunately, the lacing takes care of that gap, and it definitely is a wearable muslin and already far nicer to wear than my RTW numbers. But - it needs improving.

So this is my pattern for the front with those further changes taken into account (and some sort of basis for a bust cup drawn in tentatively): 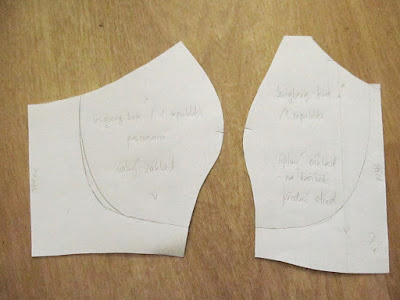 Which will presumably go into a Part 3 of this adventure, this time with elastic. We'll see how many parts will follow after that. :D