After some four years or so, they are finished - well, unless I decide I want to do some alterations to the cording or something...

Finished, wearable, very much so. Wearing them right now. I'm getting used to the busk - the fact that I cannot just bend like I'm used to is... weird. But other than that, I like the fit, and would wear them out just because.


In fact, I did - under my green dress, which actually fits better with them (except that the chemise sleeves show, and I had to pin the chemise up so that the hem would not show as well). No one really paid me any more attention than usual. I think it's the fact that I wore a dress, and a hat on top of it. :D Apparently, that's so uncommon an occurence in my hometown on its own that no one really cares what's underneath. I mean, it was a hot summer day and I was the only woman out in a dress and a hat. So I cannot get weirder!
I've also worn them with my mother's dancing lessons dress - the one fits me too high in the bust. So the raised Empire bust should work, right? It did. With the Regency stays, the 1970s dress fits me almost perfectly (except that the neckline is still too high and still strangles me). It makes me wonder what 1970s bras looked like - but I digress.

As you know if you've been reading the previous posts, achieving the fit took some fiddling - first, it was too tight in the original state, and then when I added another bust gusset, it turned out to be too loose and wrongly shaped. In that post, I covered the progression of the stays up to that point. After that post, I took the gussets in - in the end, only the two inner ones; the third one, i.e. the two gussets on the outsides, remained in their original shape and size, which turned out to give the bust the perfect separated Regency shape.

But it means that the inside of the cups is less clean than I originally intended. Two were already completely finished from both sides, so I had to slash through the darts I inserted in order to keep it flat and smooth. I stitched those resulting seam allowances down with a herringbone stitch, to prevent them from fraying. The middle gusset - the one I had added before - had only one layer sewn in at that point, so I just added a fish dart there, and cut a new outer layer, so it's nice and clean at least from the outside.

In the end, I followed another advice I had received on Facebook and lowered the centre top (and shortened the busk accordingly). It really does sit better - when worn, it's actually level that way, and I think it does somehow contribute to the proper separation...

Other details include: initials embroidered on a spot where I shed an obligatory costuming drop of blood early on in the sewing. Because it was a snap decision at a time before the HSF, it's not really period accurate, I'm afraid. But I guess the whole garment is just passable at this point, so who cares. It's mine, and I don't really mind. 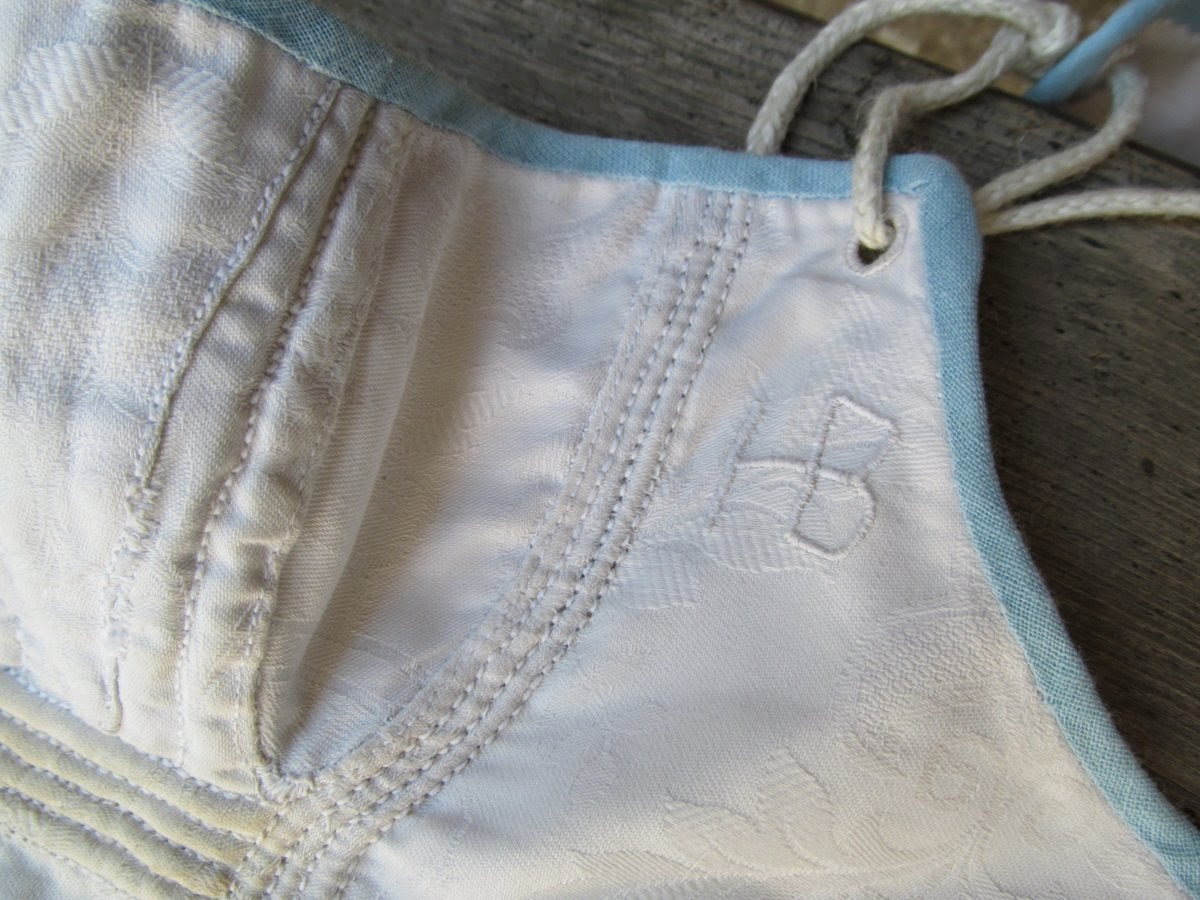 Handmade lacing eyelets. Most of them are really nice. Some are a bit wonky. I photographed the nicer side, because I'm proud like that. 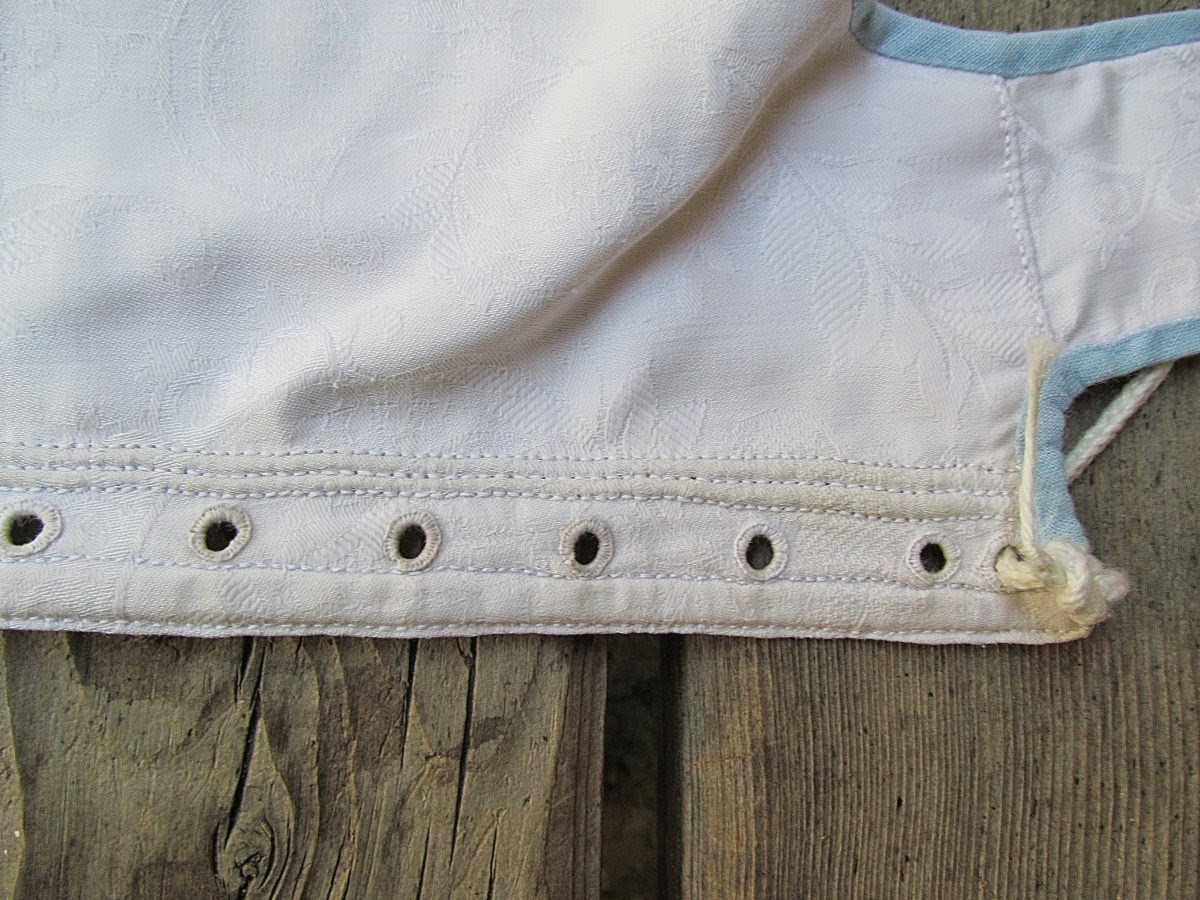 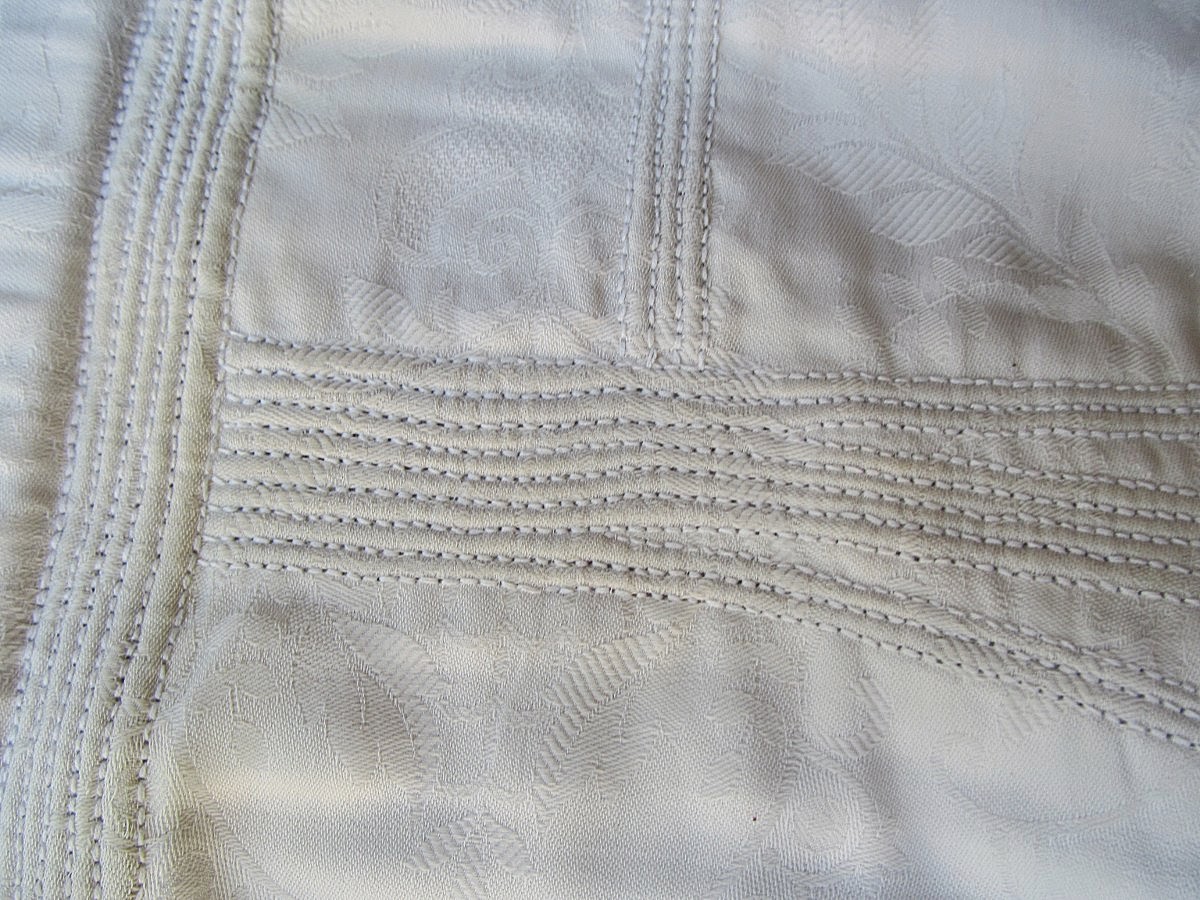 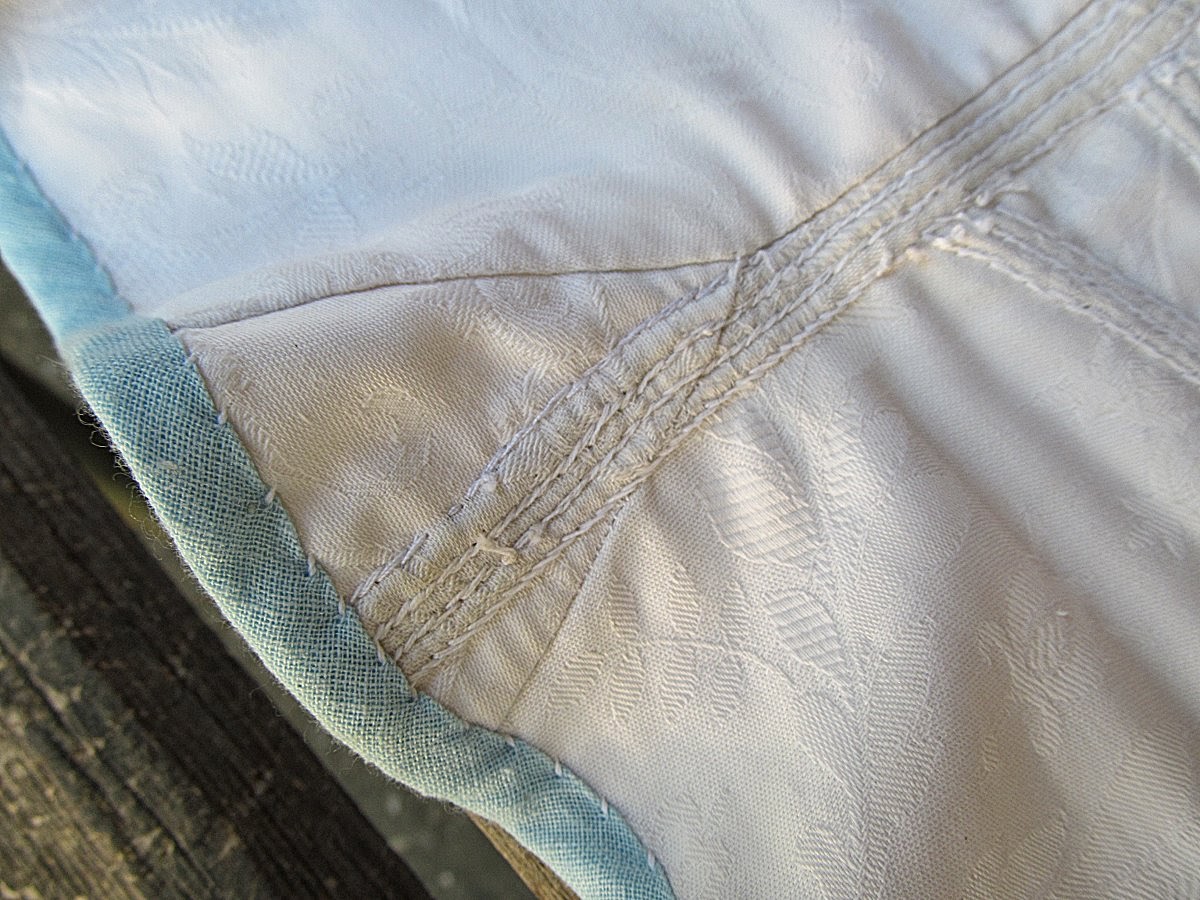 The binding is sewed on with a backstitch from the front, with the stitching hidden inside the binding, and then stitched down with fell stitch from the inside. Here, you can also see the hip gusset and the cording running alongside the side seam and then down into the gusset (while the seam continues towards the back - the top here).

I had no idea how a busk pocket was made, so I just more or less literally sewed a pocket on the inside, consisting of two layers just like the stays themselves, for strength. It ended up a bit wonky, too, but that's why it's on the inside. 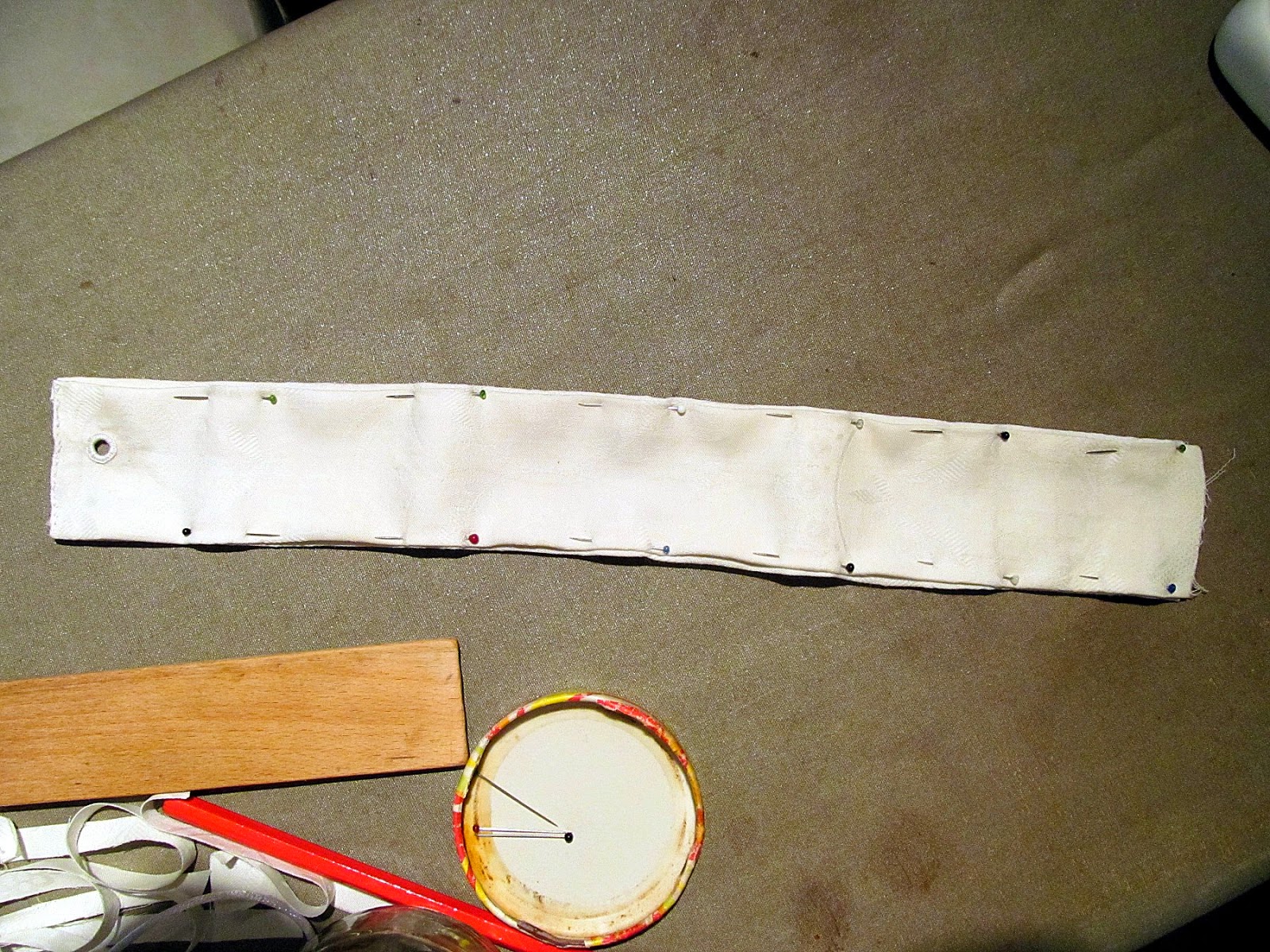 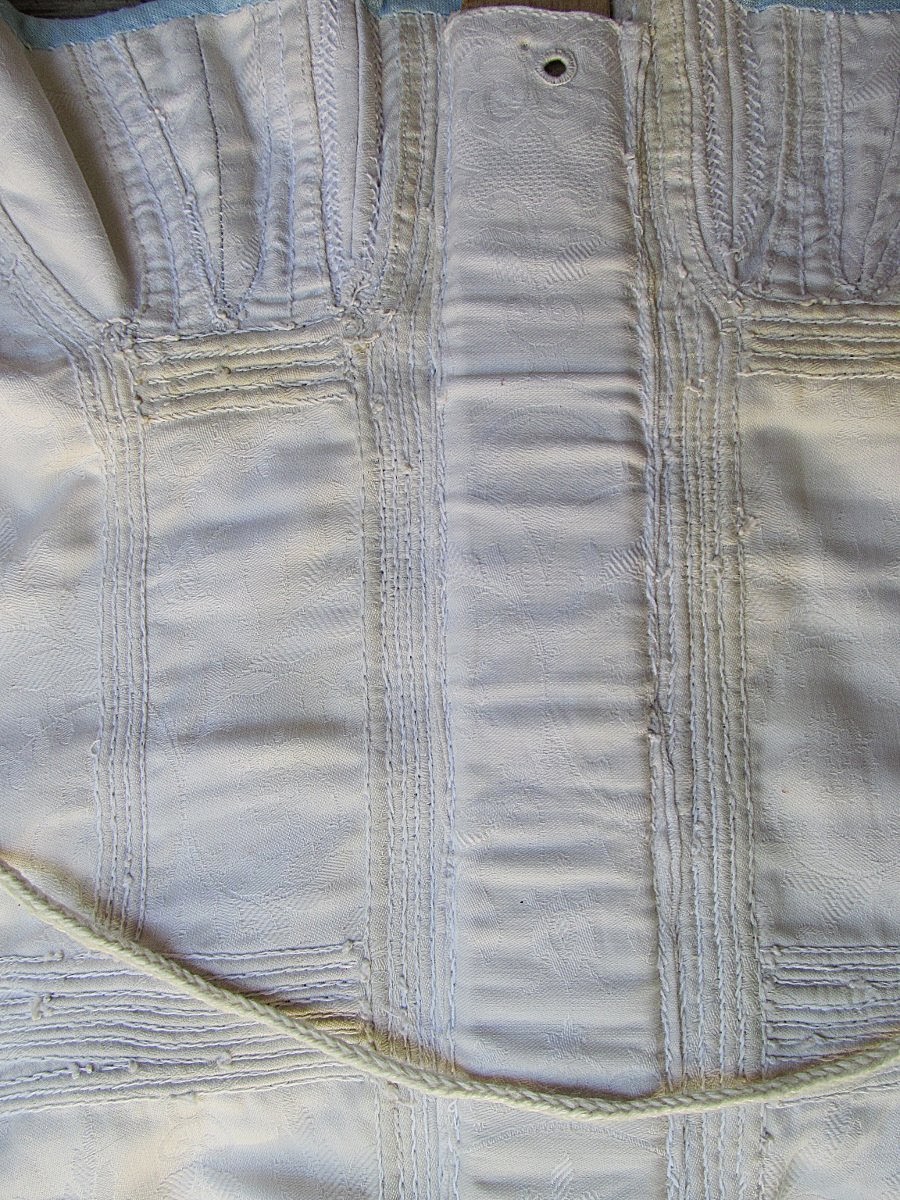 Ah, yes, there is one little alteration left to make. Because of the wonkiness that happened despite my careful pinning, the eyelet for tying in the busk ended up in the wrong place, so I'll have to make another one next to it... I should have just made it after I sewed it on, but I did not think I'd have enough room to maneuver then. It turns out that I probably do. Next time I'll know better...

I'm still learning the best way to lace it. It turns out it definitely sits better if I leave an even lacing gap, as was intended. The first photos I took and put up on Facebook were with the waist (and hips) laced too tightly and the front too loose, which did not sit very well on me. (Also, the busk inserted wrong side out - it has a bit of a curve to it and sits better when inserted one way.)

It works and sits better when I tighten the top more carefully from the start, and then lace the rest of it down, trying to keep a more even gap. 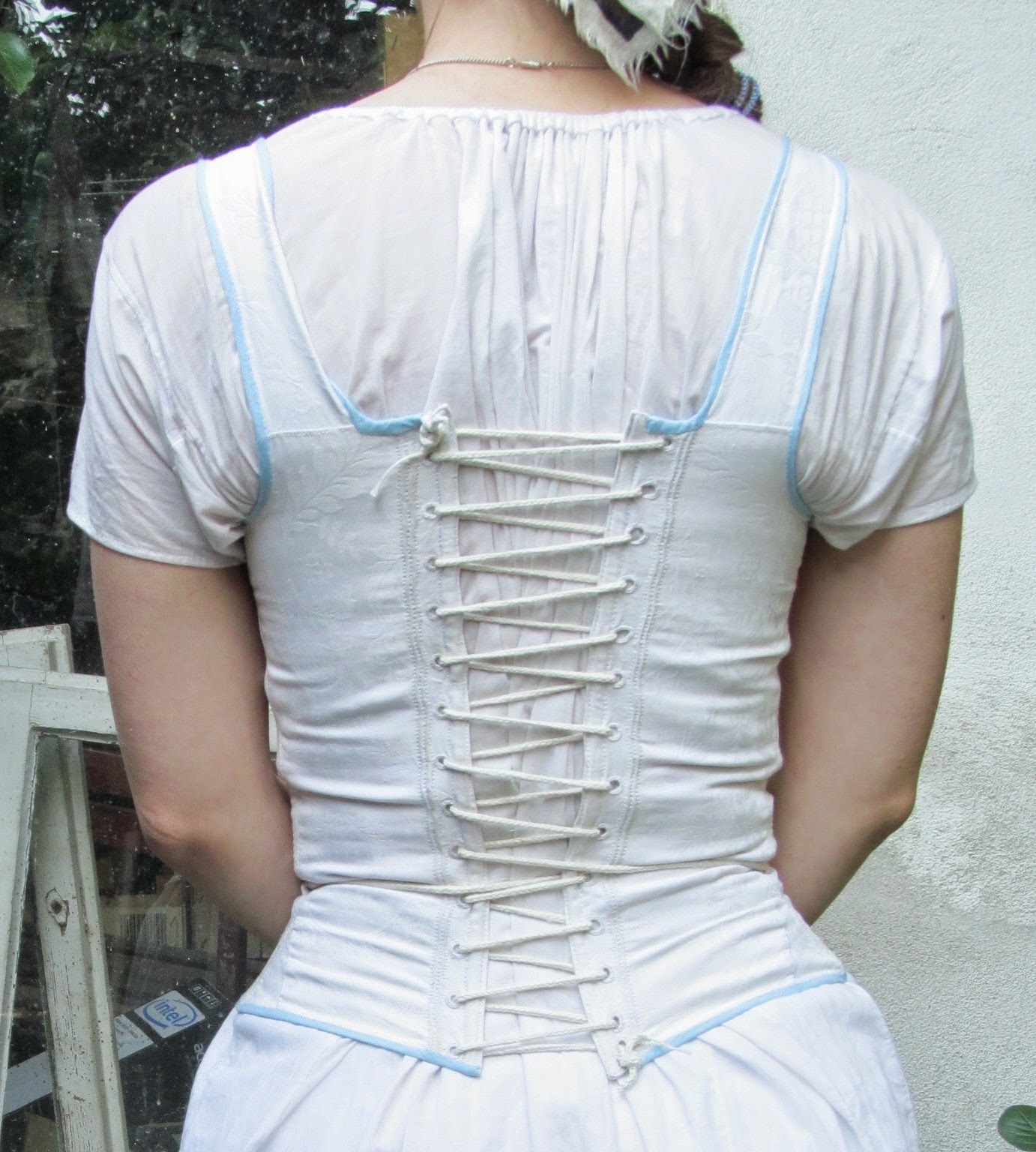 Here you can see what was another objection raised to my pattern by a more knowledgeable member of the Historical Sew Fortnightly - apparently, the back is too low. I think I can sense / imagine the difference around my shoulders when I wear it, but there's really nothing I can do about that now. Except do it better next time. Ha.

What the item is: Regency / Romantic era stays (really mostly Regency)
The Challenge: Shape & Support
Fabric: cotton damask (old duvet cover)
Pattern: my own
Year: cca 1810-1849 (it’s a bit cobbled together and a starting point for things to come)
Notions: white cotton thread (and basting thread that's not left in the finished garment), two cable ties, cotton bias binding, two thicknesses of hemp cord for the cording, homemade linen laces (see here), homemade wooden busk
How historically accurate is it? I guess about 50:50. The overall style is more or less correct, it’s all handsewn (including the eyelets), I made my own laces. Cotton is plausible. Damask less so – I have not seen any damask stays from this era; but the weave is similar to the satin / twill weaves used and the pattern reasonably historical. Coloured binding apparently did happen occasionally (unless that's a more modern addition... huh), but not very often (and would have probably been twill tape rather than bias). Hemp cord is not documented, as far as I know, but hemp was definitely used for something in my area, and I have absolutely no documentation for stays of the time in my area, so your guess is as good as mine. Plastic, obviously; but my busk is proper solid wood, phew.
Hours to complete: No idea whatsoever. I worked on them on and off for about four years; although, obviously, for a majority of that time it was off.
First worn: Properly finished with all the laces and everything, on last Friday for mock-ups of another project, and then around the house just for the fun of it. And on Saturday, even out for a short trip to a shop, under the green dress.
Total cost: Most materials were free / given to me; my guess is about 40 CZK for the cords (cording + laces) and some thread (most of which was a gift, too) 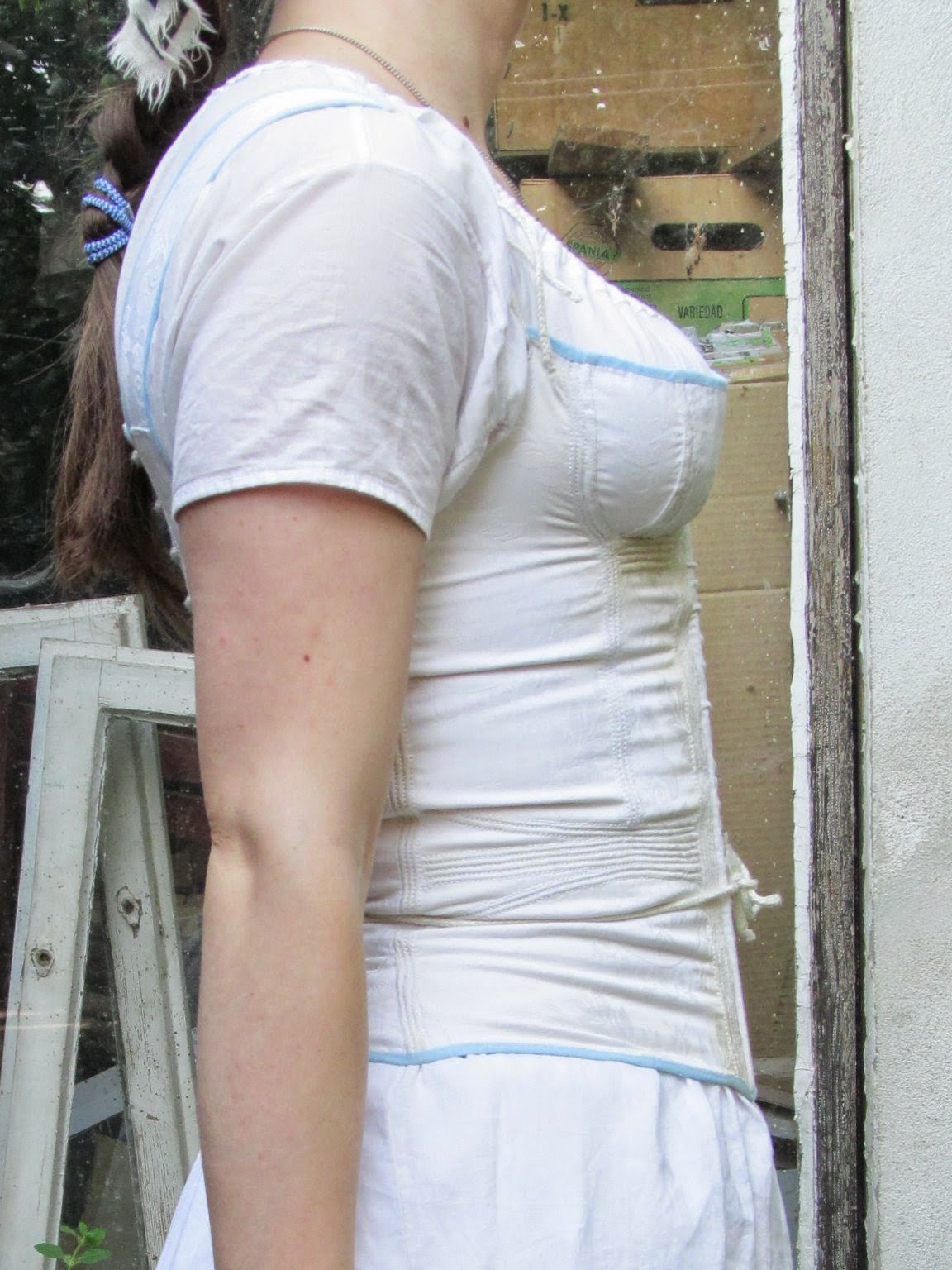 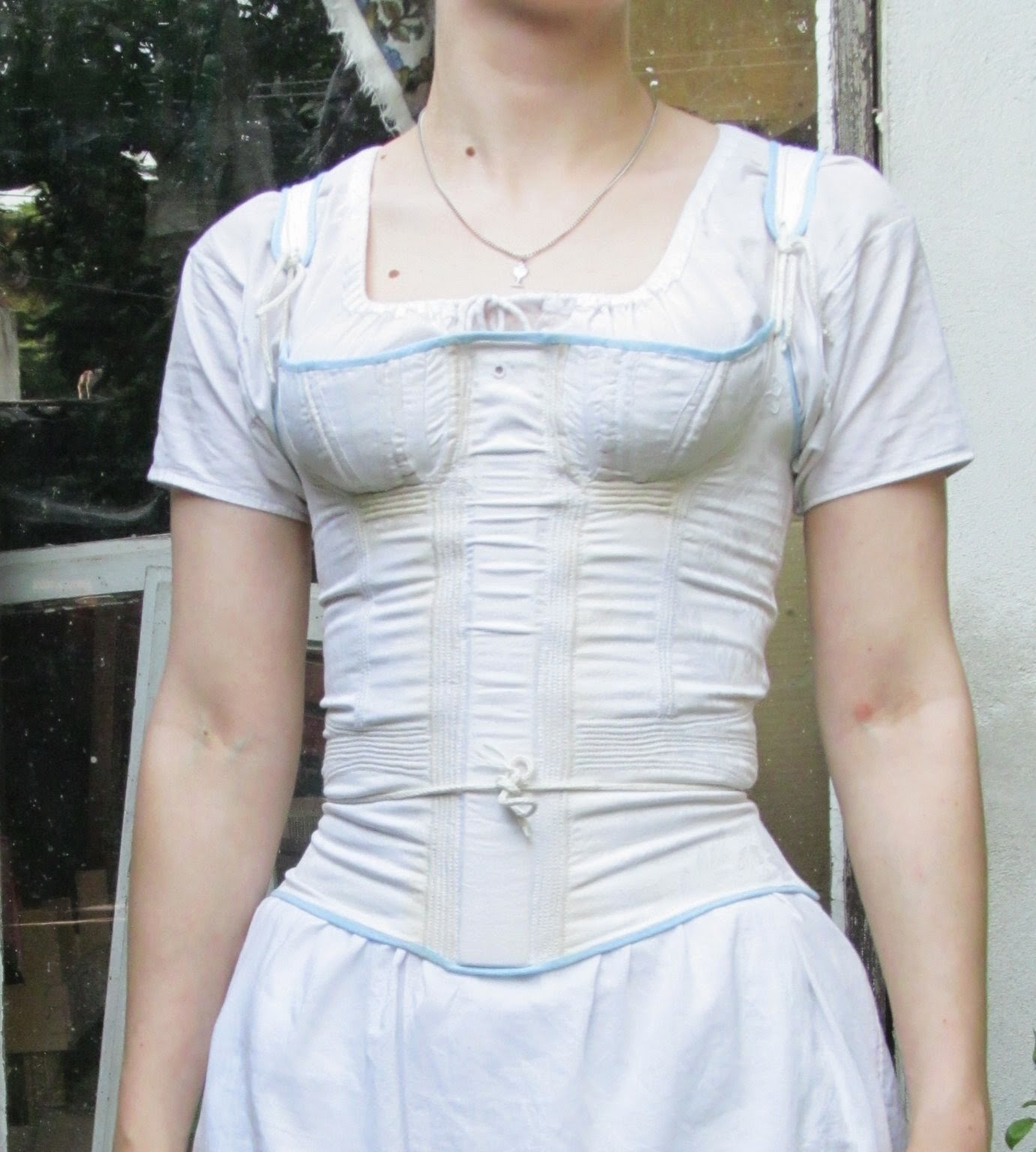 I think despite the aforementioned shortcomings, I'm doing to digitise the final pattern. Maybe add the necessary alterations (raising the back) to it more easily that way. And share it, of course. It gives me such a great shape and support that it could come in useful to someone else as well - the only free pattern available online, beside Sabine's short stays studies, of course, seems to be the one from Katherine Koshka-the-Cat. While great (it did give me a starting point for my own stays), it is for a small person and for a smaller bust. I'm quite slim, too, but I'm definitely an M to Koshka's corset's S. :D

Any ideas what name to give this pattern, now that I give my patterns names? Please stay away from the obvious Jane Austen candidates if you can... I'd go with a Pan Tadeusz name, but Zosia is too firmly entrenched as this in my mind, and Telimena just doesn't sound right. Telimena's all about fashionable fabrics and adornment, so a shape and support garment that's hidden underneath doesn't feel right for her either.
Vystavil Hana - Marmota v 22:55