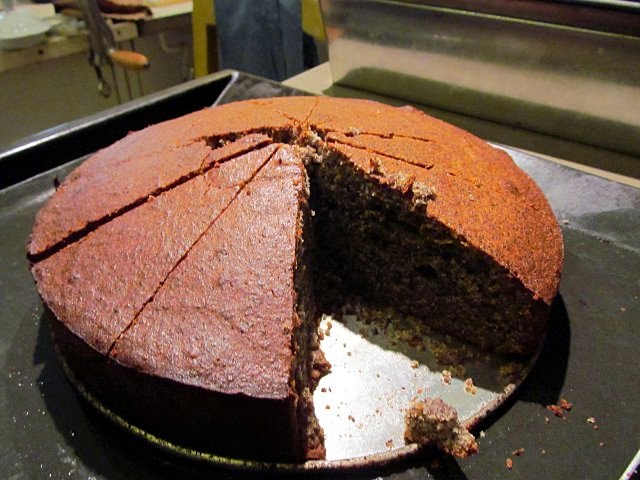 When I came across a cake called "Mouřenín benátský" - "The Moor of Venice" in Rettigová's cookbook, and when I saw it was a poppy seed cake with lemon zest, I knew I had to try it. It has a somewhat funny name (and politically incorrect from a modern perspective, but); it definitely qualifies for Challenge #4; it clearly has a Shakespeare connection (pity the Literature challenge was not meant like that...); and it's a poppy seed cake, which I'd wanted to try my hand at for a while.


Venetian Moor
In a bowl, rub thoroughly half a pound of fresh butter with half a pound clarified butter, mix in 4 whole eggs and 4 egg yolks, one at a time, add 3 spoons of thick yeast and 3 spoons of cream, and make a dough with a pint of flour, so that it's as light a dough as for a rubbed buchta; then pound a pint of poppy seeds and mix it into the dough with half a pound of pound (um...) sugar and with cut up rind from half a lemon, salt it a little and put it into a cake / torte mold.

Right. That's quite straightforward, as old recipes go, except that as before, the yeast part is not quite clear, and it does not say a word about how to bake it.
The latter, though, is probably because the recipe right above it does. (It's also the recipe for the aforementioned "rubbed buchta".) It says to leave at least "two fingers" empty in the mold, and let it rise to fill the mold. Then not to shake it too much when putting it into the oven, and let it bake slowly for at least an hour.

So that's the recipe!

The Date/Year and Region: cca mid-19th century Bohemia (this edition of the cookbook is from 1868, but the recipe could be as old as 1826)

How I made it: 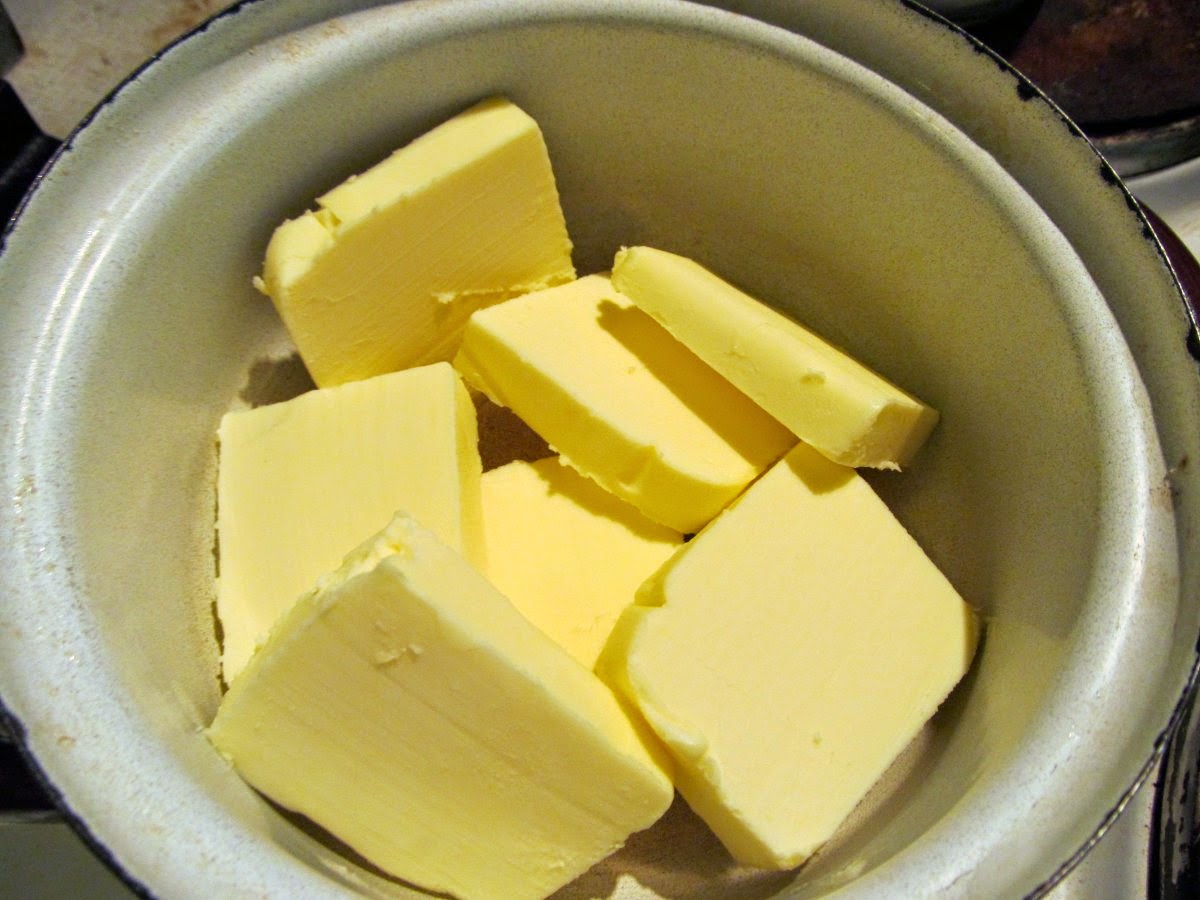 I started by clarifying my butter. The overall amount of an old Czech pound is a little bit over 500 g, so I just used the default 250 g packet as my half a pound and clarified roughly a half of it. 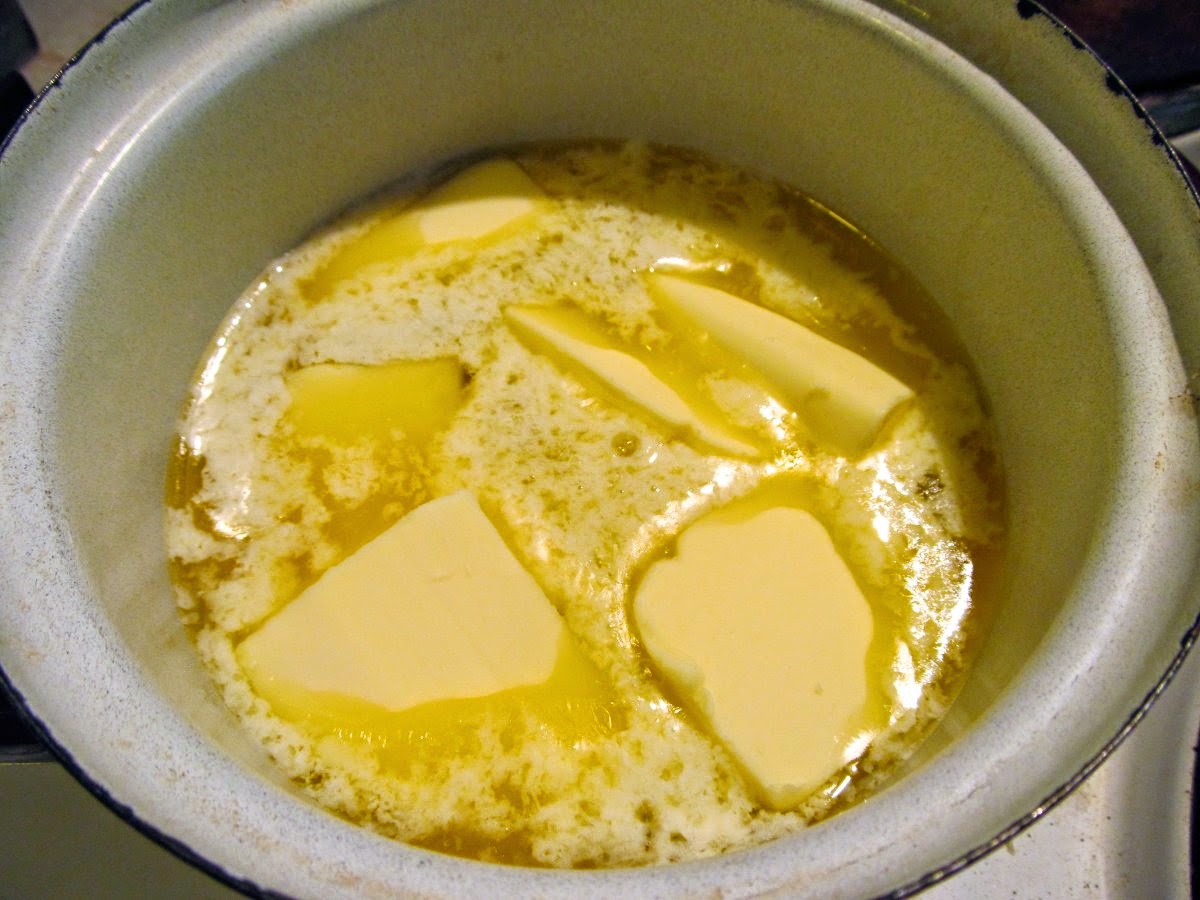 You warm it up and let it melt, but make sure it doesn't sizzle. A foam will apear on top, which you skim. 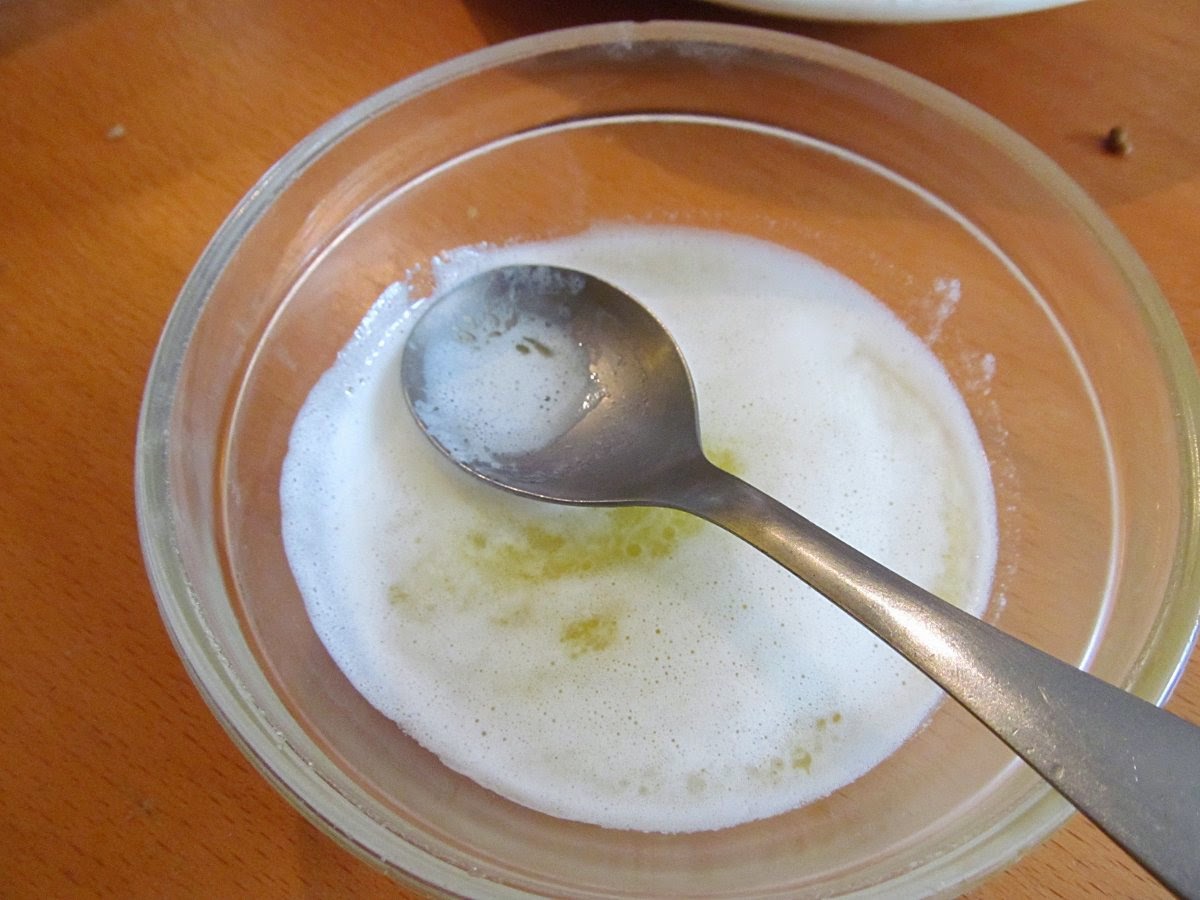 I used this skimmed buttery substance to grease my mold (quite generously). 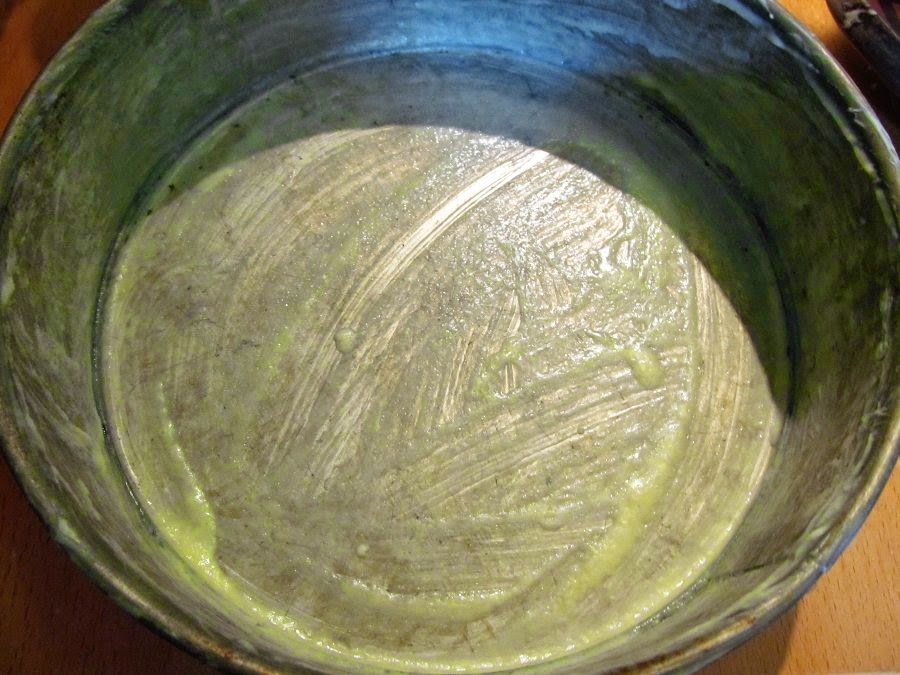 The rest of it will be a clear yellow substance with some whitish mess on the bottom. You only want the clear yellow liquid for clarified butter. I did not manage to skim everything (I never do) and managed to pour out some of the whitish stuff, too, but because I was going to mix it with unclarified butter anyway, I wasn't too bothered by that. 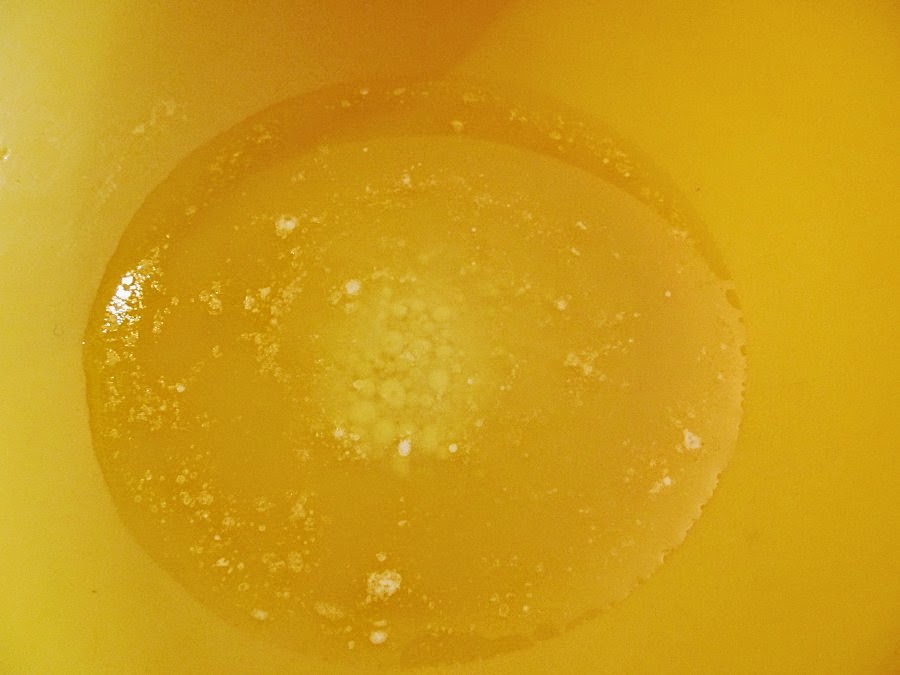 You can't exactly see that it's yellow because of my yellow bowl, though...

I let it cool down a bit, but did not wait till it thickened, because I figured the liquidity of it would actually help me with the rubbing. 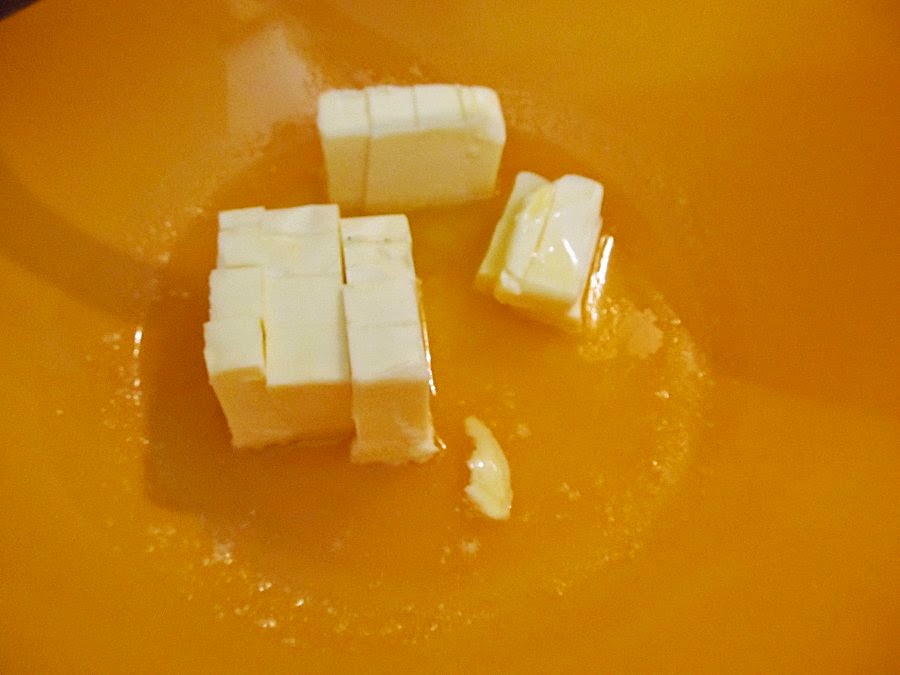 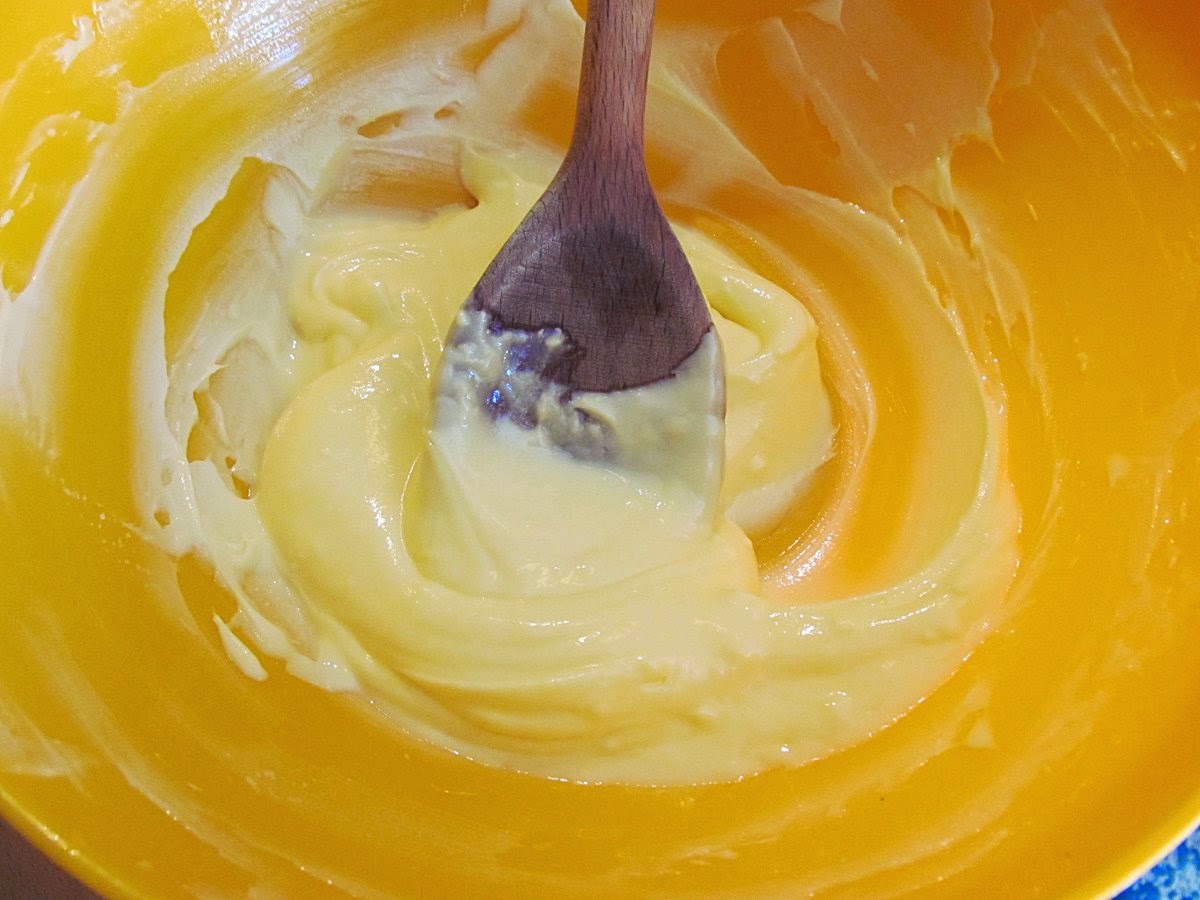 Then I started adding the eggs. Actually, I started with the yolks, which was easy. Then, with the whites in the mix, it suddenly started separating into egg and butter, and it took a lot of stirring to turn it into a sort-of-homogeneous mix. Fact learned: egg whites repel fats. Good to know. 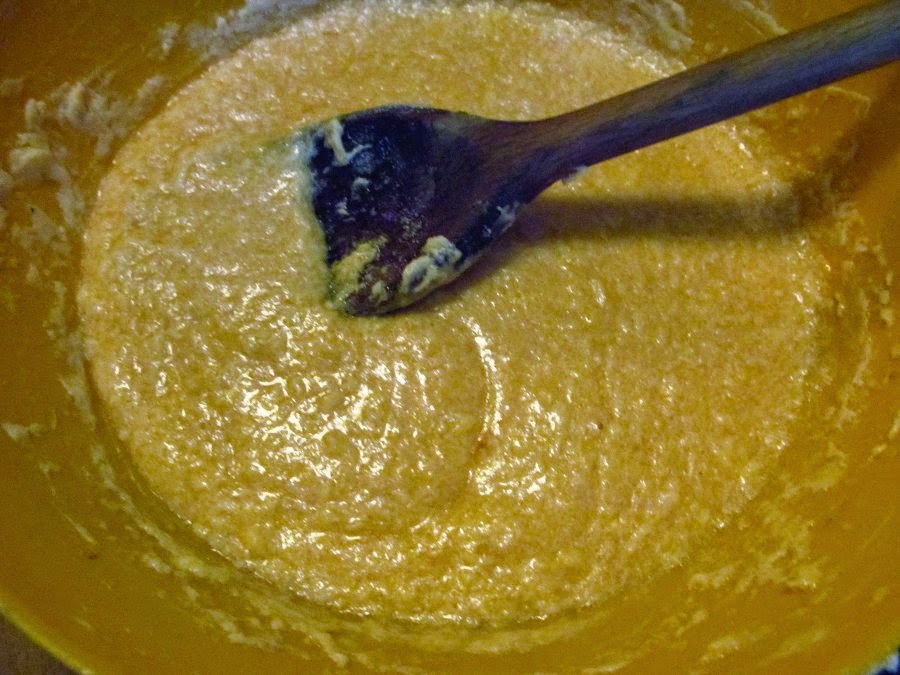 All this stirring took maybe another 45-50 minutes. Ugh. Well, it helps if you can watch something.

At that point, I realised I did not have any poppy seeds at home, which turned this into a two-day enterprise. But it actually saved me some work, because the next day, I bought a packet of already ground poppy seeds. With all that stirring, it was a welcome reprieve to my arms!

That first day, I covered the butter-egg mix and put it into the fridge, and forgot my other ingredients out.
Another fact learned: yeast produces some kind of gas. I store my yeast in a jar, because our house is conductive to moulds (another ugh), and when I opened the jar the next day, it made that distinctive hissing sound. I worried at hearing it, but the yeast was perfectly fine.

I kept putting the ingredients in in a wrong order, compared to the recipe, because I did not have the recipe open at that point and just went by memory. So I started with the sugar. This helped, actually, because stirring the sugar in smoothened the mixture again. Unlike with the breadrolls, I used regular crystal sugar, because it occurred to me that at the time of the recipe, sugar came in cones and "pound sugar" (as opposed to the "finely pound sugar" from another recipe) could actually be just something like crystal sugar. 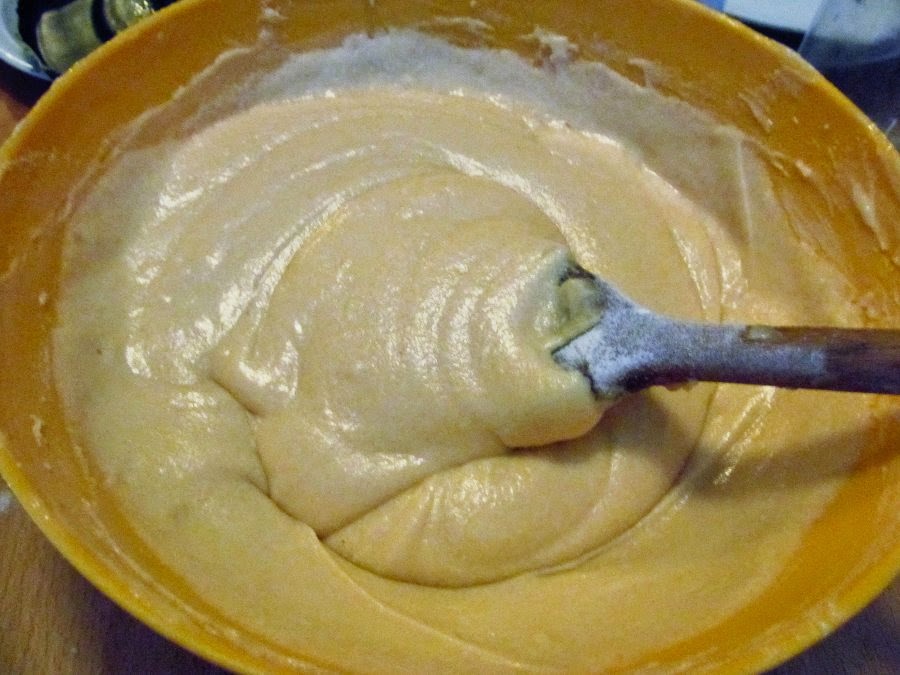 I mixed the yeast (half a packet = 20 g, working around the "thick yeast" which I don't think is what we have nowadays) with two teaspoons of the sugar, as usual, but I did not really make a starter (unlike what I did with the breadrolls). I think making one and making sure it rises would be better with this recipe, though, because all that fat is a lot of hard work for the yeast. Maybe using more of the yeast, too.

Mixed that in with the cream, added the flour (two 250 ml cups as roughly the old Czech žejdlík = pint).

Then the lemon zest. 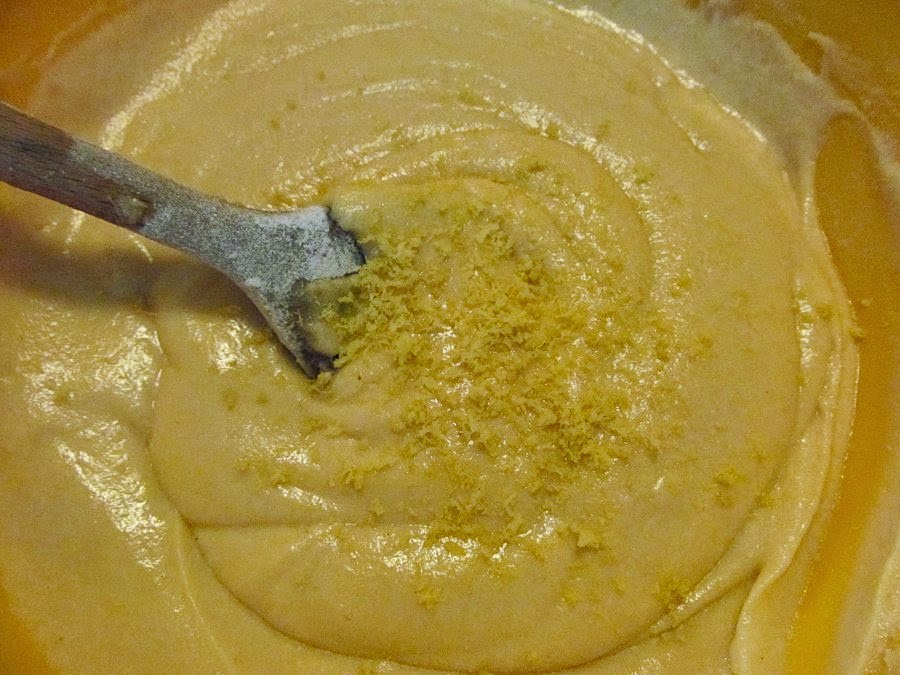 And a pinch of salt, and a heap of ground poppy seeds (two cups, just like the flour). 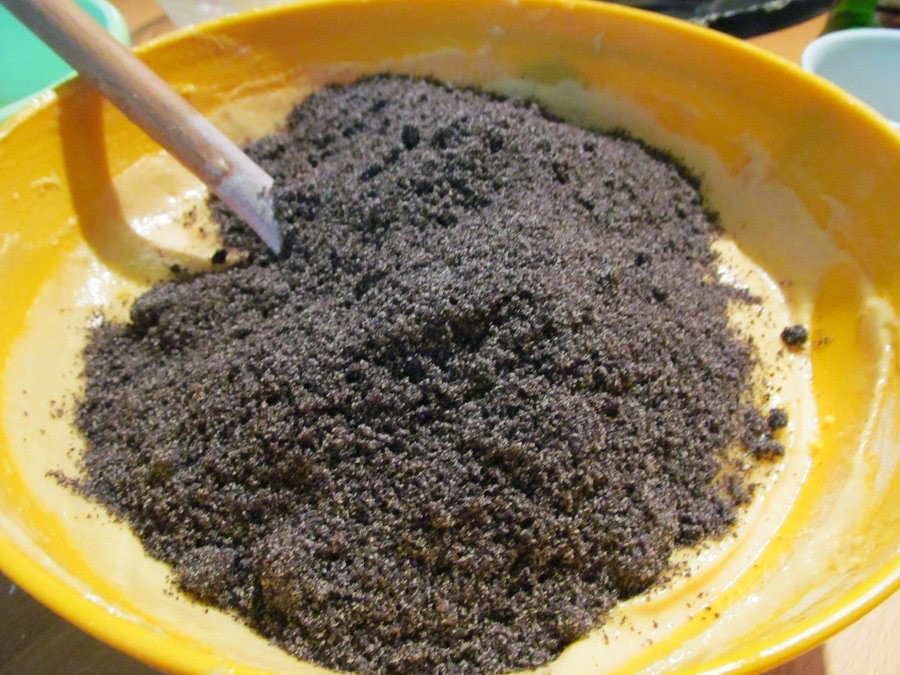 Mix it in and put the dough into the greased cake mold. My mold is cca 23-14 cm in diameter and there was plenty of room. 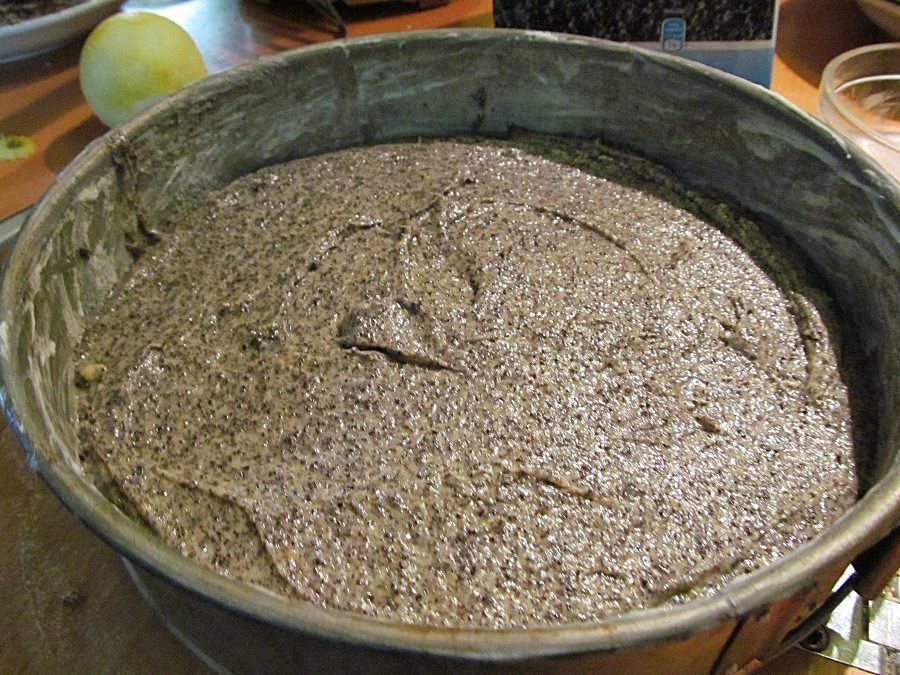 And then try to let it rise, "try" being the operative word. It did not, which is why I think I should have gone all the way with the yeast starter.

But it did rise in the oven. I baked it at about 150 Celsius in a hot air oven, for about 50 minutes. I think it was a tad too long - the hot air oven always takes a shorter amount ot time and it came out quite dark on the outside. Or maybe the oven was a tad too hot and it should have been baked at a lower degree for a longer time.

It cracked, too. Still, it turned out good. 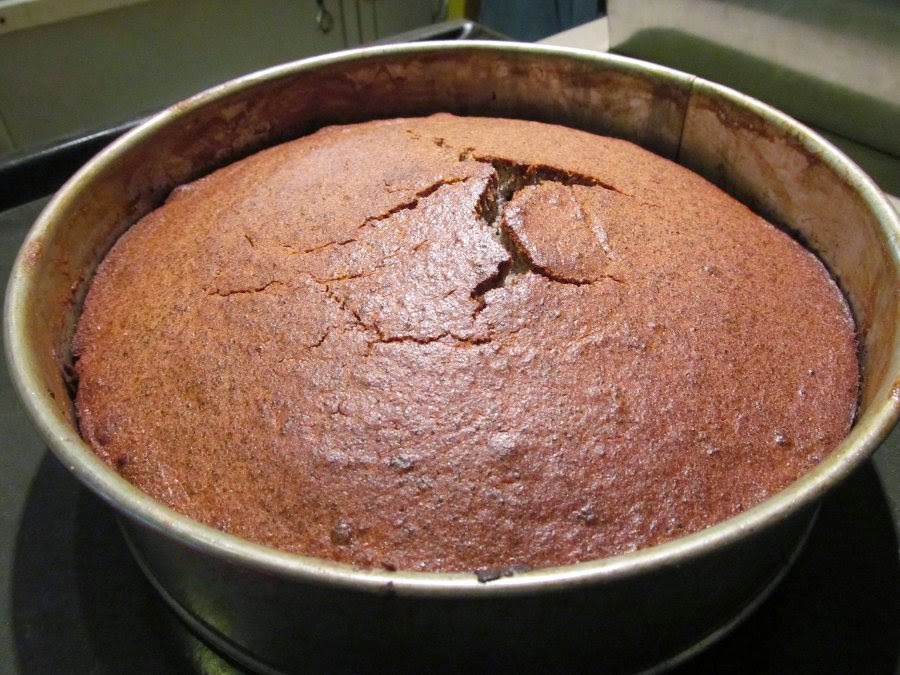 Time to complete: Maybe two and a half hours, not counting the grounding of poppy seeds that I was saved from. Over an hour of intense rubbing and stirring. It's quite the kitchen workout; I think I still feel it in my arms! So if you're not aiming for historical accuracy and can utilise a blender, by all means do.

How successful was it? Quite successful. Basically, really successful on the level of being what the original recipe probably called for. Less successful in the fact that I actually have a bit of a problem with that huge amount of poppy seeds (it irritates my throat somewhat), so next time I'd probably only use one cup, and make it more lemony with some lemon juice, maybe, to suit my tastes better. If you have a similar problem with poppy seeds, drown it with milk. It helps.
But father seems to have downed three thick slices without a problem.
It also definitely costs more than my usual cheap and simple dishes. And is more labour intensive. But it's also filling and lasts the two people currently in this household for several days, a special treat for breakfast or supper without being too much of a "sugar bomb". And therefore I think it's still much more cost and labour effective than some other sugary confections.

How accurate is it? Well, the usual, electric oven, some plastic utensils. Pre-ground poppy seeds, lemon rind actually grated rather than cut up. Modern butter and yeast (but not dry yeast). A bit of a conjecture on some of the ingredients and methods. Other than that, very accurate.
Vystavil Hana - Marmota v 21:56