I am slowly but surely cleaning and organising my room. (I've cleaned out a table for my sewing machine, and now it no longer has to sit on the dining table, yay! More room to cut fabric. :D) There were all these beads and components that I've been holding onto for years, with vague ideas of what I wanted to make, but it was all just catching dust. Pah.

So I went ahead and started making things instead. The idea here is, when the beads are unused, they sit in boxes and jars, using up flat horizontal space, while when they are made up into necklaces, they use up only vertical space on the outer side of the bunk bed (where nobody sleeps anymore): 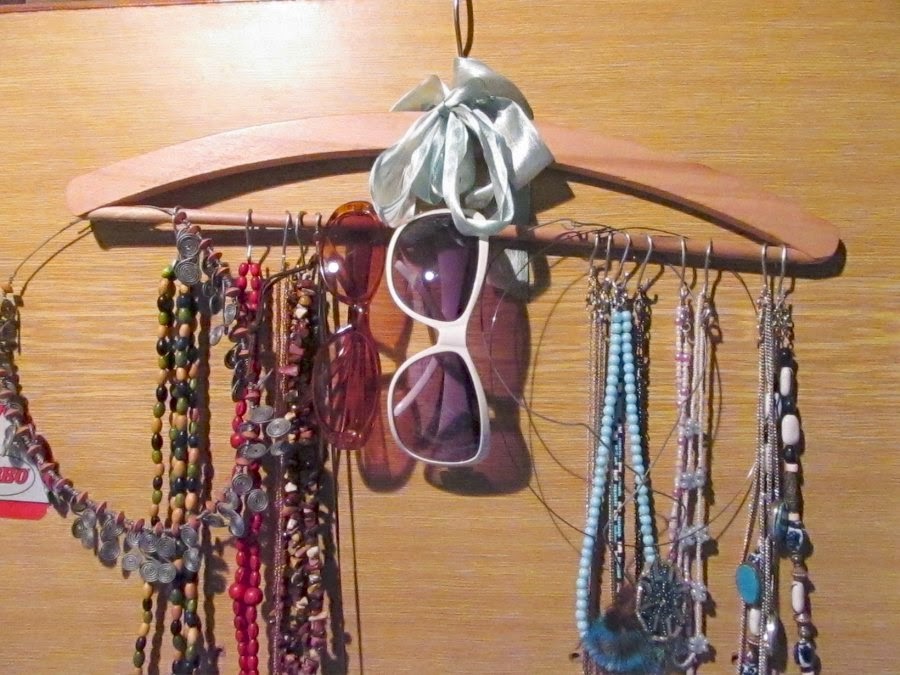 It's a storage solution that I'm very proud of. :-) A combination of something I saw in an Ikea catalogue (with the hanger and sunglasses) and what I saw on Pinterest - it's here. The original poster used purchased hooks and towel rod, I settled for what I already had and am making my hooks from a (probably aluminum) wire I've found in my father's storage. He said he did not need it. I did. Perfect.

Now only if that stupid old sticker could be scraped off so easily.

My entry for the challenge was actually made from new beads, which, in their similarity to beads I already had, inspired me to do something about it. One of them - you can sort of see one at the closure that's a slightly different colour - I already had, the memory of which was what prompted me to buy the others. It's a somewhat skewed idea of using what you already have, but it did also prompt me to start using the other colours. ;-)

This is my light entry for the challenge. One that's not strictly historical, but it will serve me well with my historical things. (I have another entry, but it needs to be washed first, because I already managed to squirt cherry juice on it. Just by eating the cherries.) 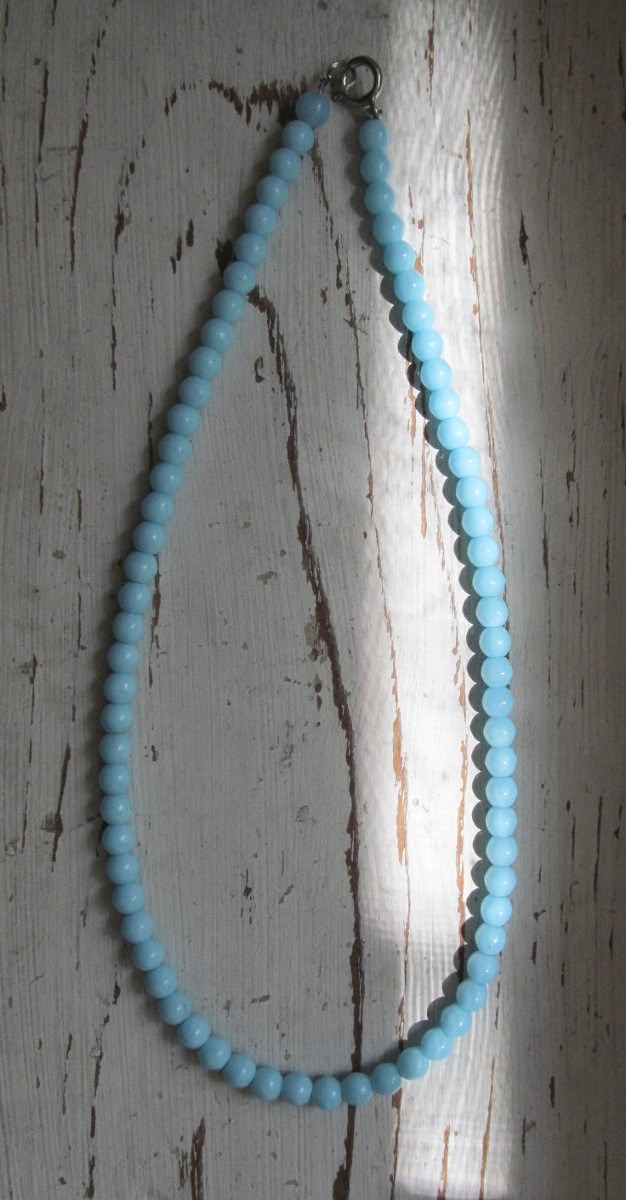 The Challenge: #13 Under $10
Fabric: none
Pattern: none
Year: non-specific and variable; the idea was something to wear with my Regency clothes, though

Notions: glass beads, spring closure + ring, thin plastic-encased jewellery wire
How historically accurate is it? About 30%, I suppose. The "wire" is very much not and the closure is probably not accurate for Regency. I was using what I had on hand. Simple glass beads, on the other hand, are very historical and will cover me for many decades!
Hours to complete: under an hour
First worn: yesterday
Total cost: The packet of beads was 20 CZK, the wire (of which I used only a part) was 5 CZK. The closure was bought in a packet and I don't remember the cost, but since I only used part of the wire, I think 25 CZK is just about right.

The light blue / aqua of the beads is such a lovely, striking colour that the simplicity of it only enhances it. It's quite short, sitting close to the neck, which is a style you often see with pearls and beads (of whatever material) in the portraits of the era. While the colour may not be what you see often, you also don't often see portraits of more "ordinary" people, so who's to say a girl from a small Bohemian town would not have chosen them?
I'm still hoping for the pearl variety one day, but for the time being, my beloved shade of light blue is more than enough. :-) 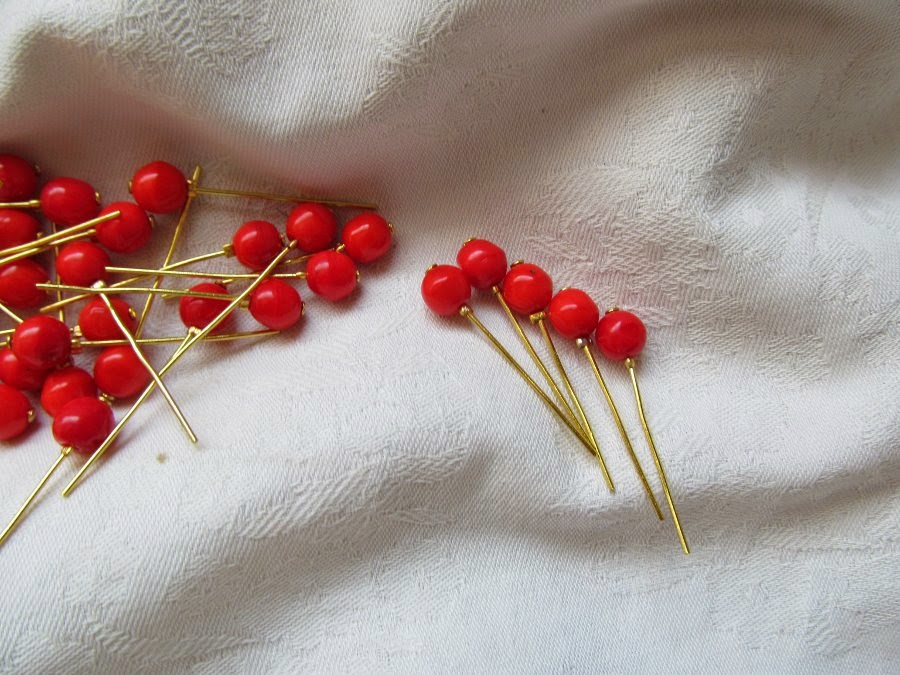 One of those aforementioned colours of glass beads I already had was this very, very red. I had, years ago, got the idea that they looked like rowanberries, and purchased some components to make them into a rowanberry-inspired tiara or earings or something, when I figure out how.

Since then, I've figured out that with my limited jewellery making skills and the limitations of components you can find in shops, it's not likely to happen. Instead, I've turned to a style that I still don't quite know how to make either, but have some less vague ideas for: 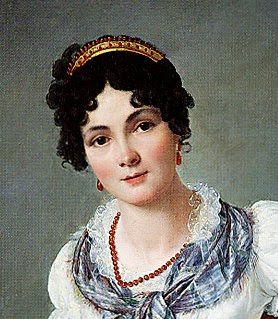 Portrait of a Woman by Henri Francois Mulard, c. 1810, detail

Coral tiaras seem to have been very, very popular - you run across extant pieces often (just google "coral tiara" and see what happens...). They tend to be this exact shade of red, too. Gold components to thread something through are much more common than rowan-shaped ones, so I think sooner or later, I'll chance upon something that I can stick those pre-made parts into. The tiara part is still a little bit unclear, but you do find headbands as well, so I think it's that and glue / wire to the rescue. And I can still pretend they're rowanberries if I want to.

There are also some loose "beads" in the same colour; some larger and some smaller than these. I wrote "beads" in quotation marks, because they have no threading holes. They're just little glass balls. 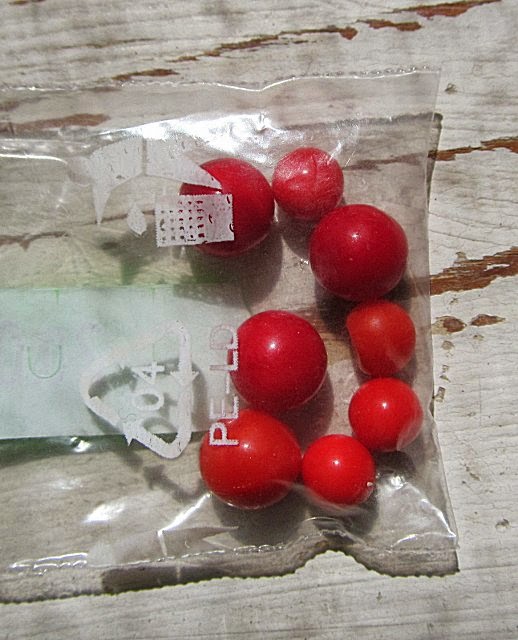 I've found these for basically all of the colours in the original mix. I guess they're some faulty specimens; but their different sizes could come in useful in a design and I really want to figure out a way to incorporate them...
Vystavil Hana - Marmota v 13:02