The rolled hem foot, that is. Unfortunately, not on fine fabrics like my handkerchief (so I'll have to do it the old-fashioned way on my second one); but with a shirting, it works. I have to be more careful with feeding the fabric than I often tend to be (see the loose part at the left, where I started), but it works! 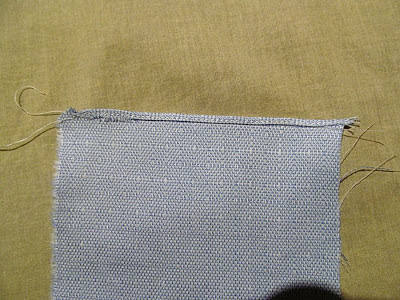 I also have a new camera. A Canon - I'm still trying to get used to it, because so far, I think I've only had Panasonics... It always takes me several tries before I manage to set it on Macro... and because I take photos of my sewing, I need Macro often. But the great thing about this camera is that it needs much less light to take good photos than my previous one did. No more need to wait for sunny days outdoors to take photos! Good thing, too, because it's been rainy for days and weeks...
(The old camera went to my sister, who mostly takes photos outdoors anyway.)

Floods are coming. It's rather scary. Fortunately, we're far enough from water, and so is grandma in Prague where some metro stations and tram lines had to be closed down already. But still...
I hear there are floods elsewhere in the world as well. How do you fare?
Vystavil Hana - Marmota v 18:15