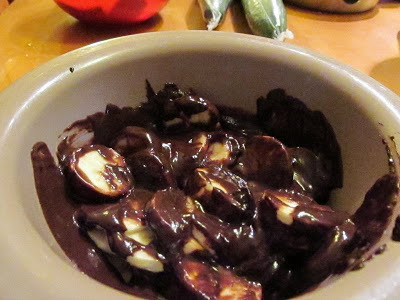 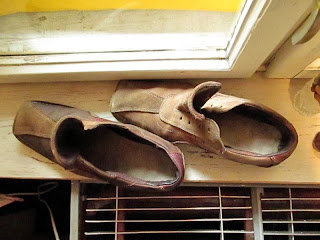 2013-06-25 Tuesday
Waxing (?) leather, including my beloved red belt and this no less beloved pair of shoes. I've had them since 2007; they already had their soles (and insoles) repaired once and they're in need of another repair at the heel. Which they will get, sooner or later. I think they were Slovakian in origin...
They started out as suede, but some parts are now nearly smooth, so I went ahead and waxed those parts - it improves the leather's flexibility considerably and is supposed to make it water-proof, too. I brushed them thoroughly afterwards to retain some of the original texture. 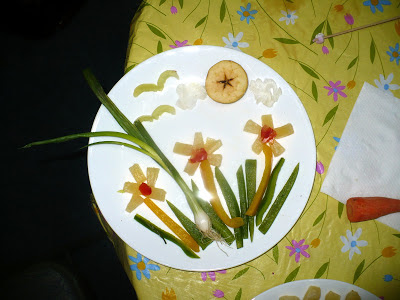 2013-06-26 Wednesday
"Joy."
I went back to Brno for just two days. I handed in my last essay, and my summer officially began... It was 12 Celsius in the evening and did not feel much like it.
A barbecue party with the English Evenings group (where my sister goes fairly regularly and I go very, very occasionally; but I was very glad to be there this time). Food and games. This was a creative game where the purpose was to create something out of food that would represent one of the themes discussed during the semester. I did not take part in this game, because I felt sleepy at first (which, I later realised, must have been because of my sister's Latvian-inspired garlic-and-dill dip). So I just took pictures. 2013-06-27 Thursday
We went to that Indian/Nepalese restaurant again, which was very nice as usual, and then went back home. After a week when it was about 24 Celsius in the house, the temperature dropped back to 20. It feels cold in comparison, but it's a nicer temperature to sleep in, I think... 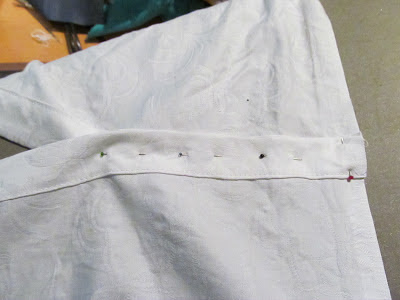 2013-06-28 Friday
I finally started sewing with that bedding from the beginnings of this blog. It took cutting and sewing a thin slippery silk to finally gather up the courage to measure out and sew a large rectangle of this... I think it's a good thing I took my time, though. This damask stretches out unexpectedly (probably due to its irregular twill weave), and I think I would have freaked out about it and messed it up back when I found the fabric. Now I just steam-pressed it into better submission, without much further thought. One duvet cover down, minus buttonholes, one more to go.
Also, I got a regular plain heavy-duty leather belt from mom. Heavy-duty is rather guaranteed: she said she had got it in an army shop. :D The thin red belt had gotten much wear since I found it, so I'm glad to have another one for casual wear. I got spoiled by the leather and could not warm up to other belts I've run into... (Well, with one exception, but that's not very casual.)


And, after the end of the blog party, this: 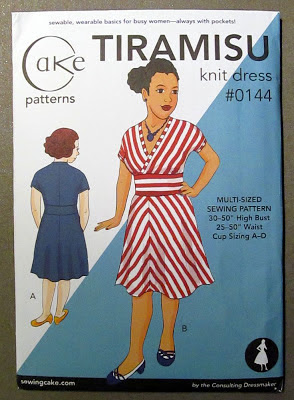 This is my Christmas gift from my sister, finally arrived! I went all wide-eyed, to finally hold it in my hands. More stashbusting in my future: I have not used that blue-grey knit yet, busy as I was with many other projects (and generally lazy, too). I'm glad it has sat unused till now, because now I'm (hopefully) going to have the perfect dress.
My sister (other) wants one, too - she fell in love with Tiramisu around the same time I did, in Steph's samples stage. My sister wants a maxi version, though. I'm very gratefull that Cation Designs has made one, because now I can envision it better. But I don't have the fabric for her version. :-/
Vystavil Hana - Marmota v 21:05