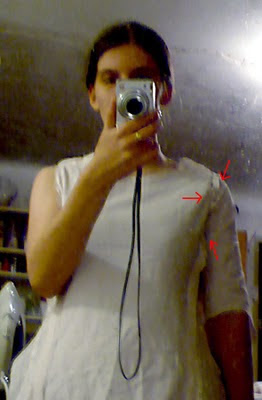 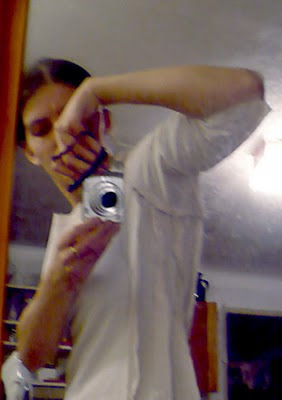 After I consulted a Burda sewing book, it was apparent that the problem was a too shallow sleeve head. AN EXAMPLE NEVER TO FOLLOW:

At least not if you have a really fitted dress.
(Shown minus the gusset, which is a 9 x 9 x 9 cm triangle.)

I re-pinned and slashed and repinned more and slashed more, until I had a useless sleve and a different armscye in front. That should, hopefully, solve the pulling. The wrinkling calls for Medieval Sleeve Nr. 3, which I'm working on now. I hope it will be the last, but you never know.

Also note that the final sleeve will not be elbow-length. I played around with this length to see how the bottom should be shaped if I went with an elbow-length sleeve with a shaped bottom (kind of like the sleeves on 18th century dresses). The theory is, I now have a shaped bottom for an elbow length sleeve and whenever I need it (like, maybe, for an early Regency dress), I'll just stick the appropriate sleeve head to it.
Vystavil Hana - Marmota v 16:50