Conquer of the UPM!

I think I've just broken a photographing record. I've taken 483 photos over the course of 2 hours.

That's because the Uměleckoprůmyslové muzeum in Prague (The Museum of Decorative Arts; aka UPM) offers free entrance every Tuesday between 5 and 7 PM. So I took advantage of it, went there and paid the photographing fee which would normally be a bit too much for me in addition to the entrance fee. And then, equipped with a little sticker with a camera on my left arm, I photographed like a mad dog. (Supposing a mad dog can photograph.)

When I came back, father told me that it took him two days to take that amount of photos in Liepaja. Liepaja is a city in Latvia and sort of his personal Mekka. So you get an idea what a crazy feat I've just conducted.

Note to potential UPM photographers: Do not wear corduroy. I had a corduroy jacket and had to remove it, because the sticker would not stick to it.
Also, bear in mind that you're not allowed to have any kind of luggage at you. Not even a very small bag. You have to wear everything you wish to keep in your pockets (I kept my mobile phone, with the sound muted, to keep trace of time). You can carry a camera, but only with that paid-for sticker, naturally. You have to keep your luggage in cloakroom lockers.


The museum's not just full of pretty things, it's very pretty itself: 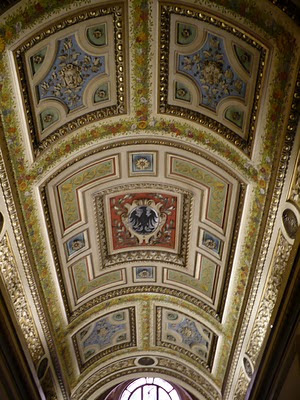 And to show you a little bit of the pretty things in there... 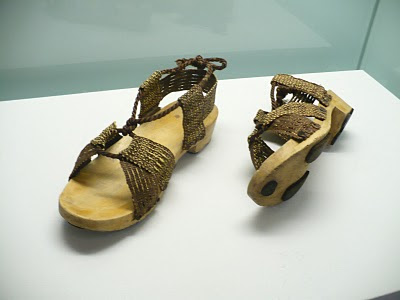 
Bodice of printed muslin, 1840s-50s, Bohemia. It's situated in a drawer which you're supposed to pull out yourself. That's why it's upside down on the photo.
There are many many of those drawers in the room dedicated to clothes and cloths. Most of it is fabric or lace, and I did not photograph most of them, because there was simply too much of them and I feared that I would not have time for the other interesting things. And I was quite right.

But in spite of all the pretty clothes, my favourite item is actually this - two curtains designed by the Czech surrealist artist Toyen (Marie Čermínová by real name). If the UPM ever (which is unlikely) issues shower curtains with the print on right, I'm totally buying one, even with a museum price. Also, I'd love me some bedding with the print on the left. *sigh* 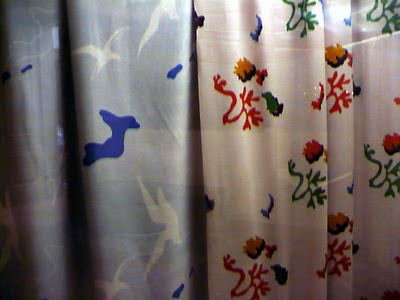