What did I find, you ask?

It's a big thing, really. Every single Czech book on historical clothing I've ever read just repeated that no corsets were worn in the Empire/Regency era, in a manner that suggests "no supportive undergarments were worn because all women suddenly went carefree and racy", which, after just a little careful examination of the portraits of the era, is obviously incorrect. But I'm not quite so surprised any more, because scouring esbirky.cz yielded very little by way of corsets and stays as such, and even what I've seen of the Central Records of Collections so far shows little (Centrální evidence sbírek, ces.mkcr.cz - a wonderful source, but built so that it's difficult to search for pictures and pretty impossible to link back to individual pages).

But I've found a local example at last! And a very pretty, embroidered example at that, though the quality of the photo leaves a lot to be desired.

Tellingly, the museum calls it a "bodice" - they have no idea what it really is (EDIT: They did not when it was labelled - sorry about the wording, see comments). I wonder if there are more misattributed Regency stays floating around in Czech museums after all? It's like Czech collective memory forgot these were supportive undergarments somewhere along the way, and when historians finally started collecting old garments, they didn't really know what they had on their hands. 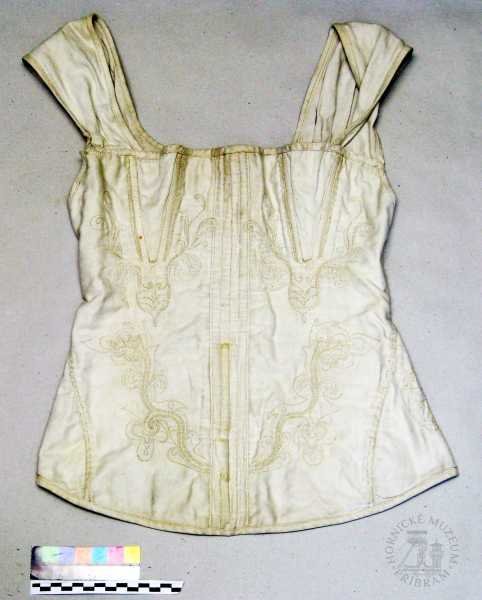 Things to note: It says the fabric is "plátno", i.e. plain weave. Quite wide straps, not adjustable, but apparently sewn in only after the top edge was bound (or maybe attached in the process of binding? How I wish I could see more of it.) They also seem to be somewhat slanted, suggesting a later date with a more sloping shoulder neckline? And no busk - instead, there are four narrow bones in the front, most of which seem to have broken out or have been removed at a later date. There's a stitching line next to the boning that might be cording, and I think there's cording in the wavy stalk in the bottom embroidery, but otherwise it seems a very soft construction. The hip gussets are sewn in in what seems a thorough, sturdy manner, with two lines of stitching - it might even be flat-felled seams. And the tips of the bust gussests are strengthened with stitching, probably a buttonhole stitch. There are rows of stitching next to the bust gussets, which I think might be bones (sharp ends, so most likely not cording)? And I think there is, or used to be, a drawstring in the top edge - there seems to be some gathering there.

EDIT: The curator has more details:
"- outer fabric is twill (may be cotton) and lining plain weave (linen)
- straps are re-sewn in the front so it is hard to tell how they work originaly (whether they were adjustable) but in the back they were sewn to body and then bound
- all bones (reeds) are missing, except few fragments
- there is no cording, beside front bones or in the embroidery (it is interesting, the embroidery was done after lining was in place)
- bust gussets do have buttonhole stitch points
- in channels beside bust gussets are white baleens
- there is no drawstring nor channell on the top
About terminology: (sorry, but I was considering it for a while). I think there is nothing wrong about using label "bodice" or "živůtek". Databases should be easily searchable so we are encouraged not to use many labels. Živůtek according to Národopisná encyklopedie Čech a Moravy is "part of woman's dress worn over shift on upper half of body" so all items you listed fall into this category. English "bodice" has mostly the same meaning - period dictionaries describe stay as "kind of bodice" etc."


(Some of this refers to what I wrote below - I'm leaving that text as is for reference.)

Thank you very, very much!

Here's a colour-coded version of my original estimate (I'll replace it with an updated version later): 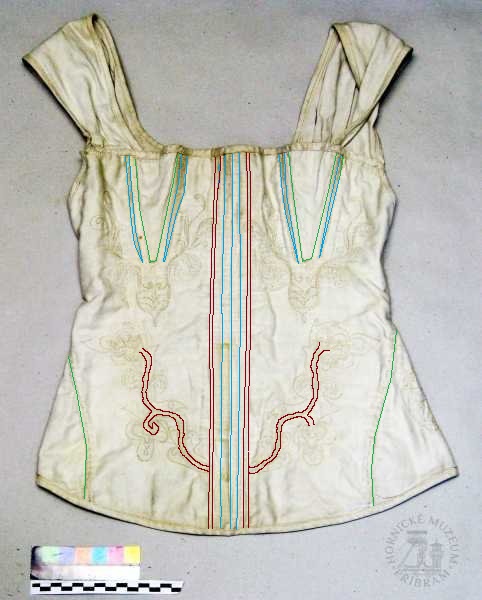 Gussets
Boning seams
Cording seams
I can't make out the rest of the embroidery properly for outlining - a safer bet would be just to look at the photo and draw out something similar.

The overall style of it points towards a later date, I think - who knows, it might be as late as 1840s, although I'm inclined to think 1820s or thereabouts (no waist shaping yet).

The single, relatively narrow bust gussets suggest to me that this was worn by a lady with a smaller cup size - the shape puts me in mind of my mom, who's the only A- or B-cup in this family, although otherwise sporting a curvy womanly figure with wide hips. I rather like the thought that this was worn by a woman of a similar figure as a Czech woman I know nowadays. :-)

I've never worked with Laughing Moon's Regency Corset pattern myself, but from what I've seen of it online, it seems it could be a really good starting point for recreating this garment, if you were so inclined.

There is a number of other bodices and stays and corselets in the Příbram collections, and one thing that looks like a swiss waist. There's a lot of bodices that are very clearly folk costume bodices, i.e. meant to be worn on the outside (with embroidery and golden trim and stuff) -  they resemble 1790s stays, as Central Bohemian bodices do, but the fabrics and trim used set them apart. Another tell is the decorative, non-functional "lacing" in the back of many of them.

In the translated descriptions below, I use "corset bodice" for the Czech term "šněrovačka", which, loosely translated, means "laced bodice", but can be used for a whole range of garments from a full-blown waist-reducing corset, through stuff that would probably be called "girdle" in English, to a folk costume bodice. It's my preferred term for Regency stays in Czech, too, by virtue of being fairly all-encompassing and traditional. By virtue of being all-encompassing, the museum descriptions apply it to nearly everything. Except the above. Something tells me that whoever labelled the collection lived under the impression that a "šněrovačka" or corset had to lace in the front, and if it didn't, it had to be a bodice: see also my comment at the end of this post. 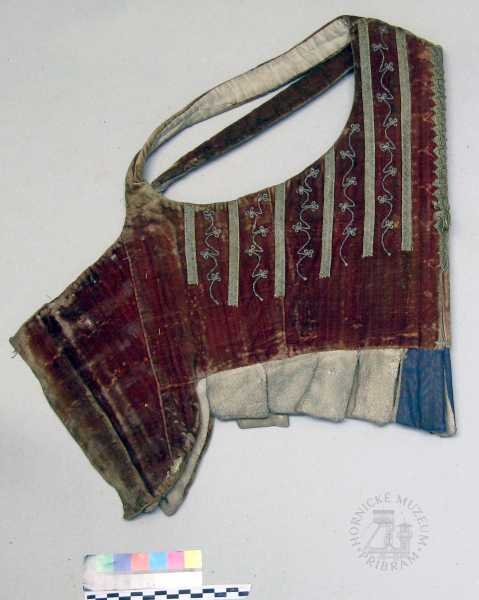 There are two other garments that throw my knowledge into confusion, and hopefully ultimately forward by that: two garments with the overall approximate shape of 1790s/early 1800s stays, with bust gussets, but they are black-coloured, and one has a silk outer and the other the non-functional lacing in the back. And - this is notable - what appears to be metal grommets (although it's a bit hard to tell with the quality of the photos). They both, however, have the eyelets spaced for spiral-lacing. Are they actual 1790s stays that were later re-used as folk costume bodices, and had their eyelets strengthened with the addition of grommets? Are they 1790s-style stays worn much later than 1790s? Were they folk-costume bodices right from the start, but employing a style not normally found in them (= bust gussets)? 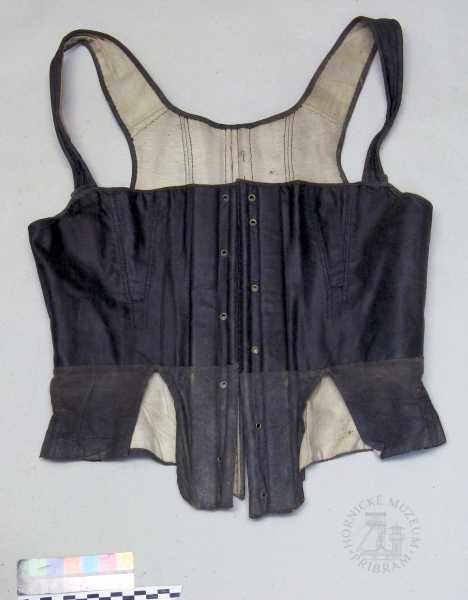 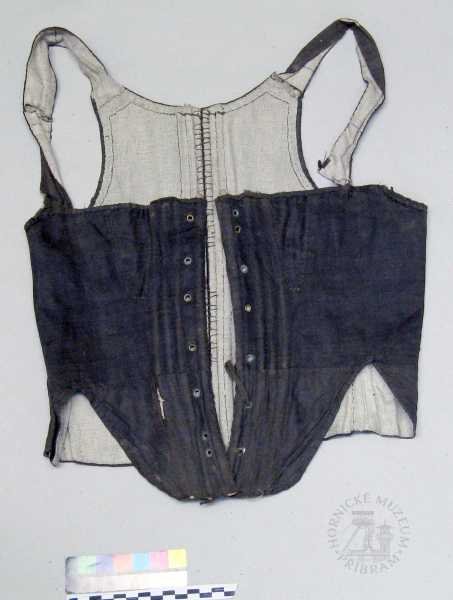 "corset bodice, black, with straps, zig-zag (mock lacing?) in the back, cotton, boning" in the collections of Hornické muzeum Příbram, ID: H/Et709

(The whole collection is awesome. There's also a cap - an actual soft "fashionable" cap with frills and stuff, not a folk costume bonnet, also not something I see often in Czech collections. And what appears to be a "miser's purse" - another Czech first for me! And many other things. Annoyingly, none of it has any dates ascribed. And whoever labeled those things really had no clue about corsetry - there's a corset with a metal busk closure, and it says it goes in the back! It's photographed with the busk in front, as if whoever photographed it had a much better idea than whoever labelled it.)
Vystavil Hana - Marmota v 14:29