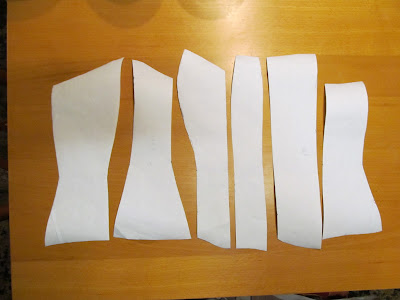 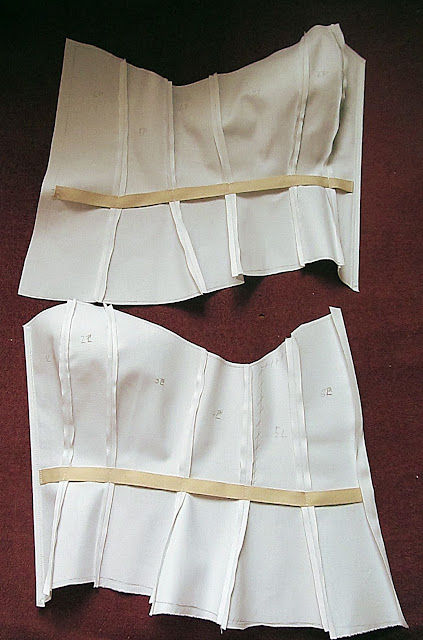 It was somewhere between this point and all the boning channels (just straight-cut strips of the coutil with edges pressed down) that it became a Sewing Secrets entry: there was blood. I didn't notice at first - when you prick your finger with a pin, it doesn't usually hurt all that much - so there was probably more than there could have been had I noticed earlier. Then there was more pricking of fingers in the later stages. It's the coutil's fault, I am sure; it's never happened to me before to such an extent, not even with the corded stays (which was the first item of clothing I ever bled onto).
First, I tried my cousin's advice with baking soda, which helped, and later, Leimomi's advice with my own saliva, which helped more. 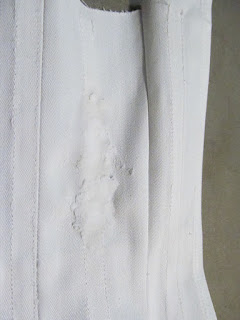 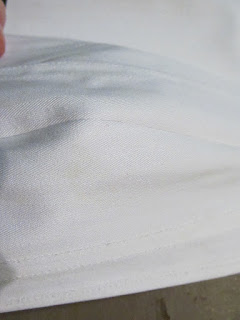 You can kind of see the baking soda. You can't really see the stains, which is slightly better than the reality.


I inserted the bones - cut to size, with my sister's help, and tipped with cheap nailpolish - and here is where I made one of my mistakes I hope to do better next time, because I didn't close the boning channels.(The tipping of the bones was another thing that held it up: I had to wait for the nailpolish to dry. Next time, now that I know how long I need the bones to be, I'm doing that first thing, and sewing while waiting.)


Then the outer - after some rummaging through the stash with an eye to colour and fibre content, I settled on one of the old torn cotton damask duvet covers - torn in several places due to the late Bisha and Kaksi's ministrations (= cats), but still good and strong otherwise. 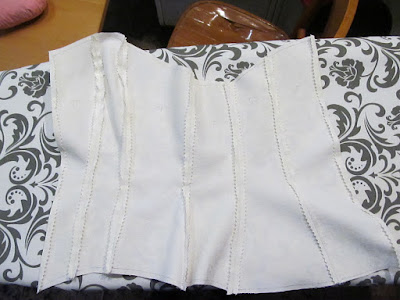 And then it was handsewing through all the seams that didn't have boning going over them, and the front and back edges. Another thing I hope to figure out how to do better next time; it's very time-consuming. 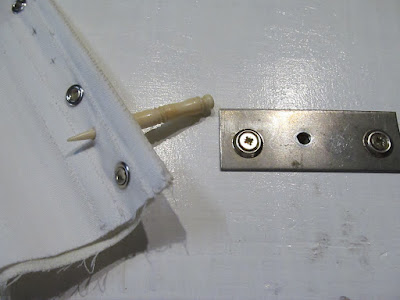 Here you can see my udělátko, made with my father's help: it involves an old wooden cutting board, a drilled hole, a piece of metal with identical drilled hole, screwed over to protect the wood, a screw that fits in and is filed down somewhat smoother, and a hammer. It's crude, it doesn't always work perfectly, it was a lot of work to perfect and is still a lot of work if the screw gets stuck in a hammered grommet,; but, well, it works and it was made with materials found at home.
(The head of the screw pushes the grommet down while its "leg" prevents it from distorting, you see. More or less, that's how it works, I think.) 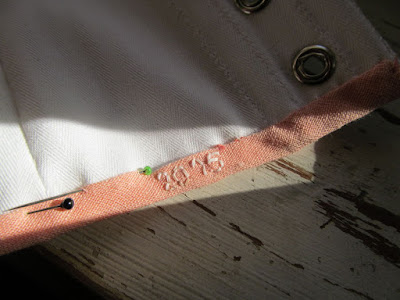 I embroidered the year of making to the inside, because I've decided that I'm going to do it from now on with all clothes I make, after seeing extant items with dates and remembering how useful it is for historians.

The Challenge: #10 Sewing Secrets
What's the Secret?: A) Way more blood stains from pricking my fingers with pins (and therefore, following Leimomi The Dreamstress's advice, also my own saliva) than is polite to admit. B) The lovely cotton damask of the outer is actually an old duvet cover. C) The embroidered date on the inside.
Fabric: white cotton coutil, pale yellow and white cotton damask
Pattern: my own, drafted according to the tutorial on Foundations Revealed (and then considerably altered to fit in the mockup stage)
Year: cca 1880s - it was made to my sister's specifications first and foremost, but I've seen a number of extant 1880s corsets that seem fairly close to what we ended up with.
Notions: white thread for sewing, beige twill tape for the waist stay sandwiched between the layers, 5 mm wide steel boning + super-cheap nail polish for tipping, pink cotton bias tape, variegated yellow embroidery thread for flossing, nickel-covered grommets, white flat corset lacing (+ white flat shoe laces for the front lacing)
How historically accurate is it? Close but no cigar. I think most or all of the techniques I used are plausible or accurate (except nail polish and lacing all the way in the front), but probably used in ways that are not really.
Hours to complete: Waaaaaaaaaaaaay too many; it was my first time making something like this, I made mistakes and ran into trouble and probably made things unnecessarily complicated for myself
First worn: all the time around the house and first time out to a Thanksgiving dinner with an English Christian group, according to latest reports
Total cost: I think the boning, grommets, lacing and the coutil (just 1/4 of the amount we bought, yay!) was around 750 CZK or a bit less? The nailpolish was just 10 CZK, binding and twill tape given to me, outer fabric from the stash / recycled.
So apparently with my sister wanting a lightly boned corset in neutral colours and fabrics, and deciding on lacing in the front instead of a busk, we managed it for just around 30 USD. But that's definitely not counting the work...
Vystavil Hana - Marmota v 12:29