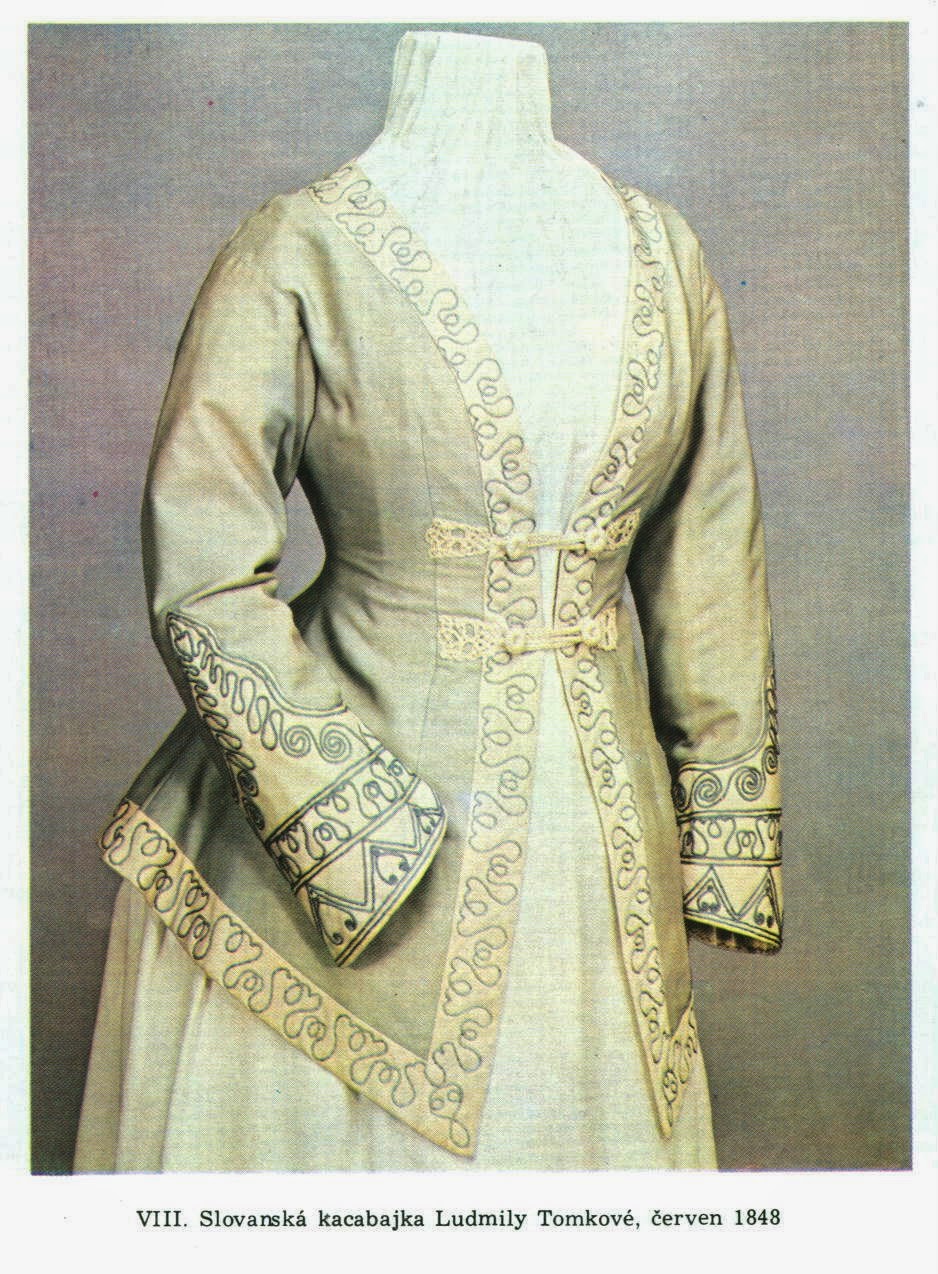 Flatlining was apparently done because a) the lining could give support / strength to the outer fabric when such support / strength was necessary, b) it was another layer protecting fine fabrics from sweat etc., c) it allowed the clothes to be easily altered, unlike modern linings.
I think I got this piece of wisdom from Historical Sewing (although I'm not sure where exactly, and it may have been on Facebook), but after my coat-altering adventure, c) makes a lot of practical sense as well. The interlining layer I added to the coat also tells me a) works - while I added it for warmth in the coat, it also gives the thick but soft wool fabric a bit more structure.

Of course, if you are sewing the jacket as a piece of modern clothing, you can opt for a different method you feel comfortable with, or which would work best for your choice of fabric. If you go for a modern construction with facings, you could probably just use the border pattern (which you have to draft anyway) twice... but bear in mind you always have to plan for the braiding if you go that route.

Flatlining this particular piece poses some planning questions for me, too...  namely, what to do with the border?

I originally thought I would embroider / trim the border first and then attach it. But looking closer at the photos of the jacket, I discovered there were seams running down the border at the centre front, meaning it's at least* two pieces for the body. I dutifully transferred that front seam to the technical drawing: 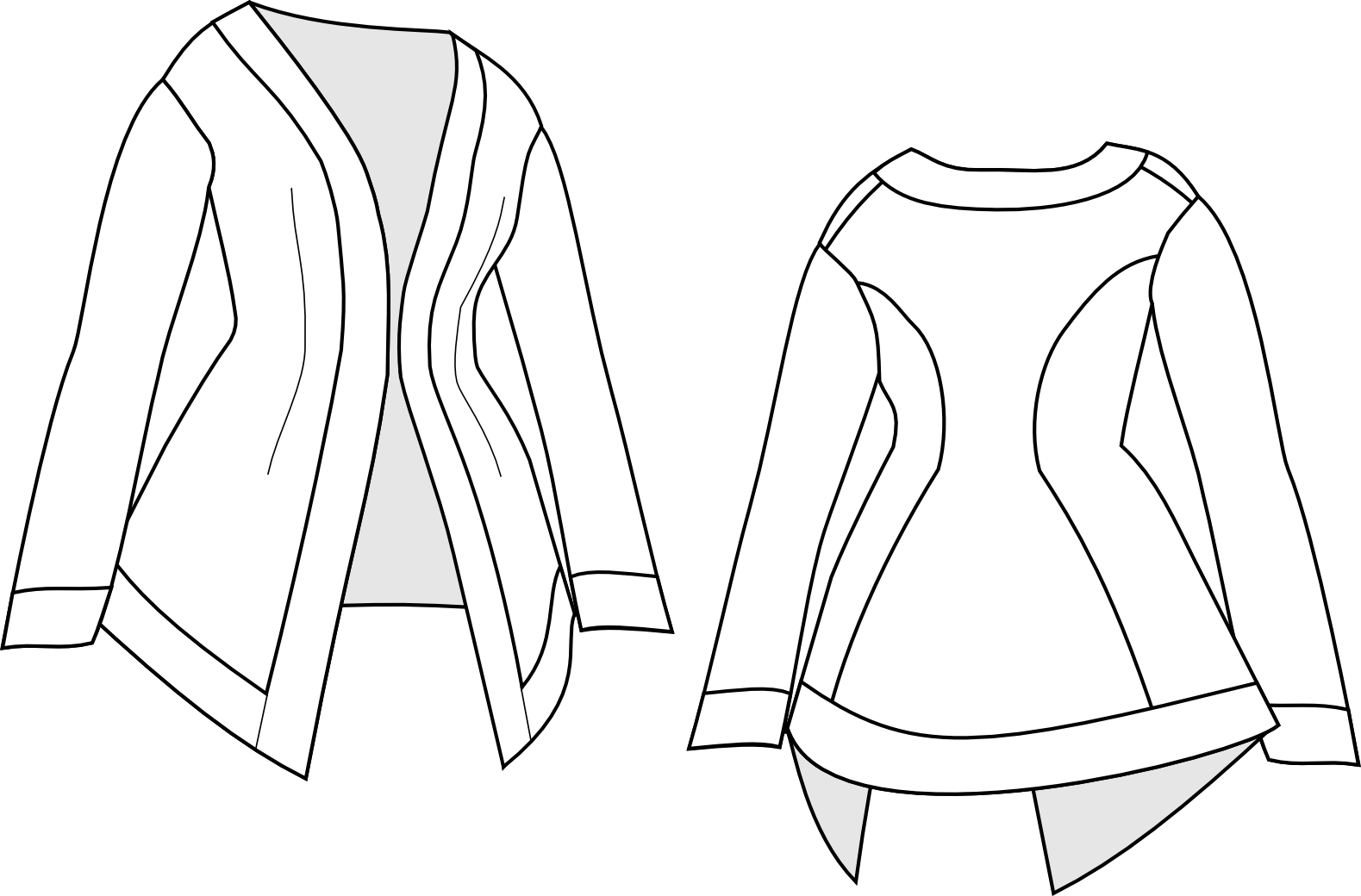 The question is, does the border come on top of the blue fabric like trim, or is it essentially an extension? And how does that work with the flatlining?
You'd want something that would make the flatlining process easier and straighforward. Straightforward is always good when it comes to sewing.

But I'm also thinking maybe I will opt for extension of all pattern pieces, all of them separately, on my version, because my fabric is bulkier, so if I pair it up with a similar weave, it would be too bulky as trim. It would require some very, very careful lining up of seams, but it would also, in turn, again make the flatlining more straightforward.
That would mean * it's eight pieces for the body. Plus two for the sleeves.

But frankly, I haven't settled on a fabric for the border yet, and therefore also not on the method. I would like to work from stash...

Plus, yes, there is the matter of the inside of the sleeve. I don't see stitches from the braiding there (though they would probably be tiny), and what I see does not exactly look like flatlining, either.
One opossibility is there's a larger hem allowance on the sleeve (with the border / trim sewn appliqué-like above the allowance), and that's what's so neatly stitched down in there, extending far enough inside the sleeve that we don't see the edge.
That's another good thing about flatlining - you can attach all the inside stitching only to the lining layer, leaving your outside fabric nice and smooth.
BUT. I think that's not what's going on there. The stitching is just next to the edge. And the sleeve hem is shaped, which does not sit well with larger hem allowances. But I have another explanation. Once again, more on that later. :-)

The original fashion fabric, as I've mentioned before, is fine kashmere. I'm not sure how many of us can afford fine kashmere - I know for a fact I can't. But the clue here is that the original is made of a fine fabric with strength and support added by the canvas flatlining.
I think I'll go with one of my slowly depleting stash of old cotton bedsheets: it's a firmer weave than the outer fabric, which should provide the support, but fine enough not to add too much additional bulk.


I was thinking of using the blue one, because I'm not sure I like the effect of the white closures on the original. So, more hoping 60 m is enough...

I'll probably, again, steer a bit away from historical accuracy there and use plastic rings as my buttons base, because that's what I have at hand. And I'm all about using up stash at the moment.

And her jacket, or at least its sleeves, was apparently patriotically lined in red, demonstrating that it does not necessarily have to be a boring neutral colour. 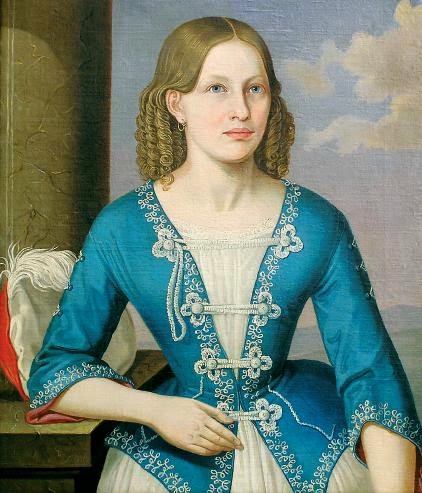 I'm pretty sure I've encountered this technique before, somewhere online. (I think it was on Romantic History somewhere. But now it seems Sarah Jane's blog is only open to invited readers? :-P)
Anyway, this technique would also explain why the stitching inside Ludmila Tomková's sleeve is so close to the edge.

Final warnings before you delve into muslining:
It's a style of stays that lasted, with small modifications, well into the 1840s, so that's what I plan to wear with it. (Leimomi compiled that post for me, for which I thank her again. Unfortunately, it seems since then most of the pictures have disappeared... I've told her, so we'll see.)
If you plan to turn it into a piece of modern clothing, or maybe even to wear it with a Victorian corset, you have to keep this in mind. 1840s was a transitional period (I love those). You could therefore wear both Regency-style stays, like e.g. this style from Katherine (Koshka the Cat), or a more typical mid-19th century corset. Modern bras sit much lower than Regency stays, so for that you'll have to lower the bust point considerably. I don't know about Victorian corsets, but I think it would be similar.
Ludmila Tomková's short torso apparently meant she was short elsewhere as well. It means I will have to add a lot of fabric there, and it will play havoc with the armscye length => with the sleeve. Because it's such a large amount, I suspect it will be an issue for everyone. Sorry.
So you'll have to keep that in mind when muslining and give yourself big allowances.
Thankfully, because it's on top of the sleeve, I think it will be an easy fix in the sleeve pattern, basically just inserting a strip of the required width into the sleeve pattern in the middle.

And one final idea: if you're lucky and end up with nice, clean muslin bits, maybe you can reuse them as your flatlining. ;-)