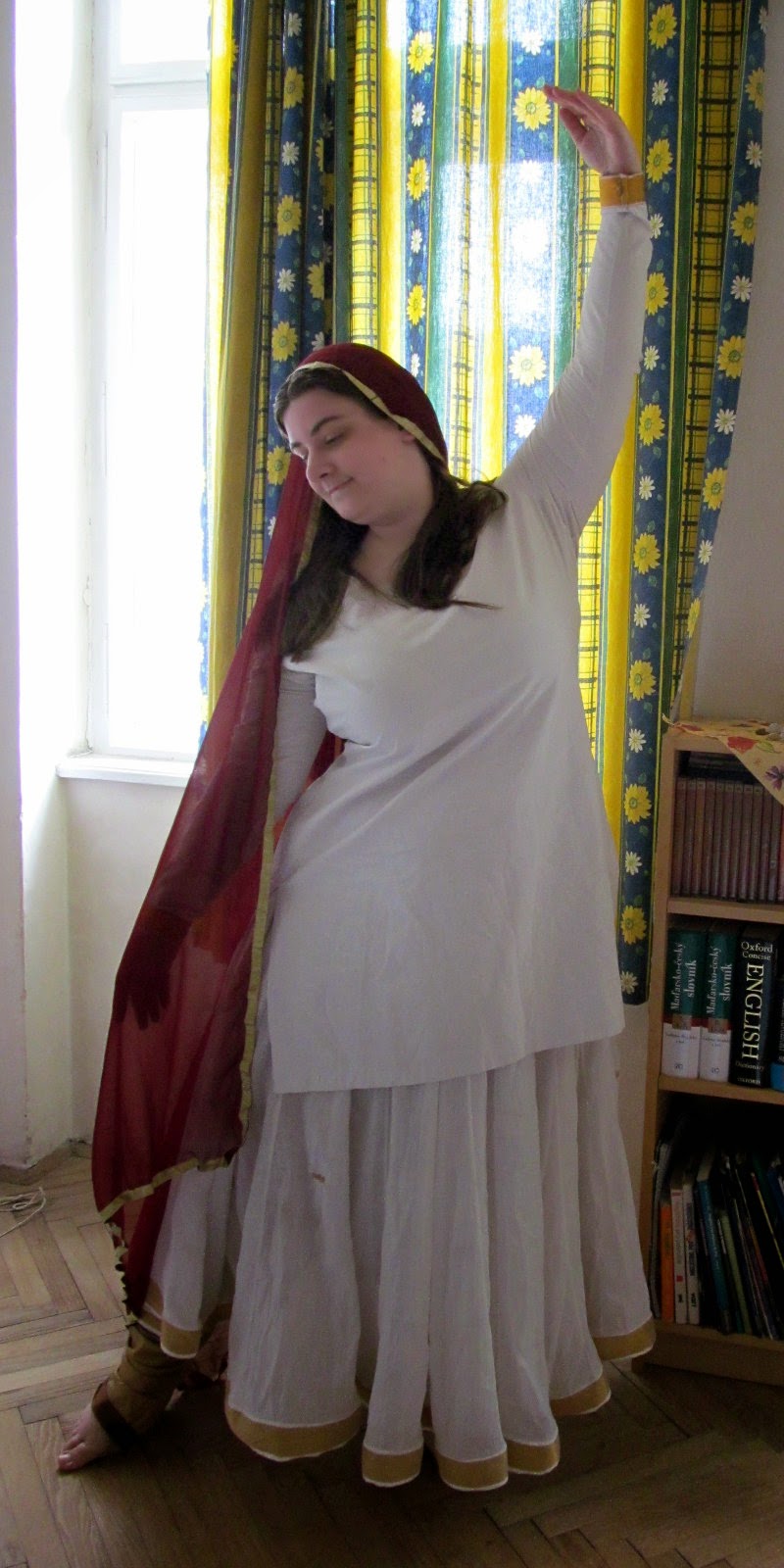 It is finished, including two patched up spots at the hem where I accidentally clipped into the fabric while cutting away the seam allowances. Those golden fibres wreak havoc on the fabric and it twists and turns on you. It is finished, excluding unfinished seam allowances at the zipper and some better way to end the drawstring so that it would not slip inside. It is most definitely functionally finished. I'll get back to those tiny details later, with a fresh mind. 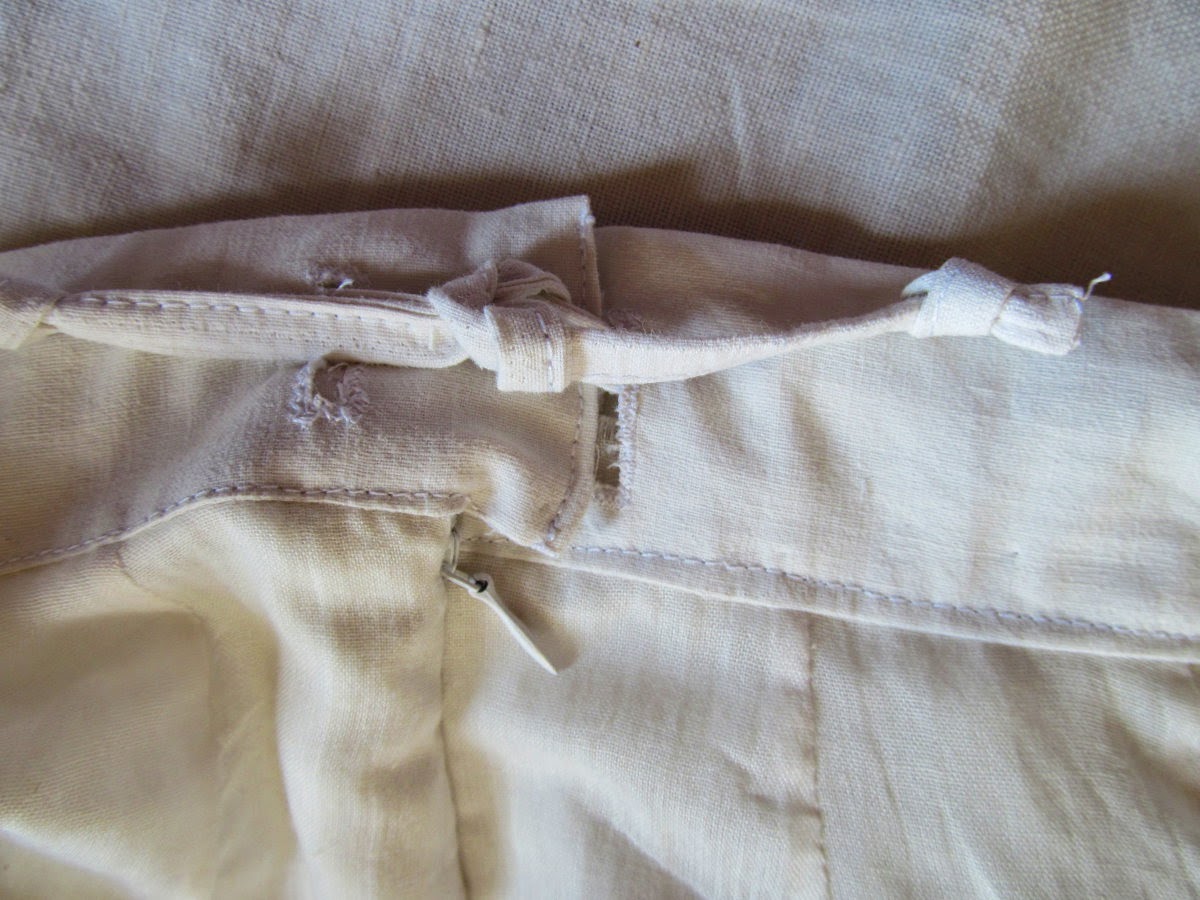 I'm not good at (button)holes. I think it has something to do with the fact I'm not on speaking terms with most buttons. Also, in retrospect, maybe I just should have made those holes smaller.


There is an invisible zipper and also two press studs on the waistband. 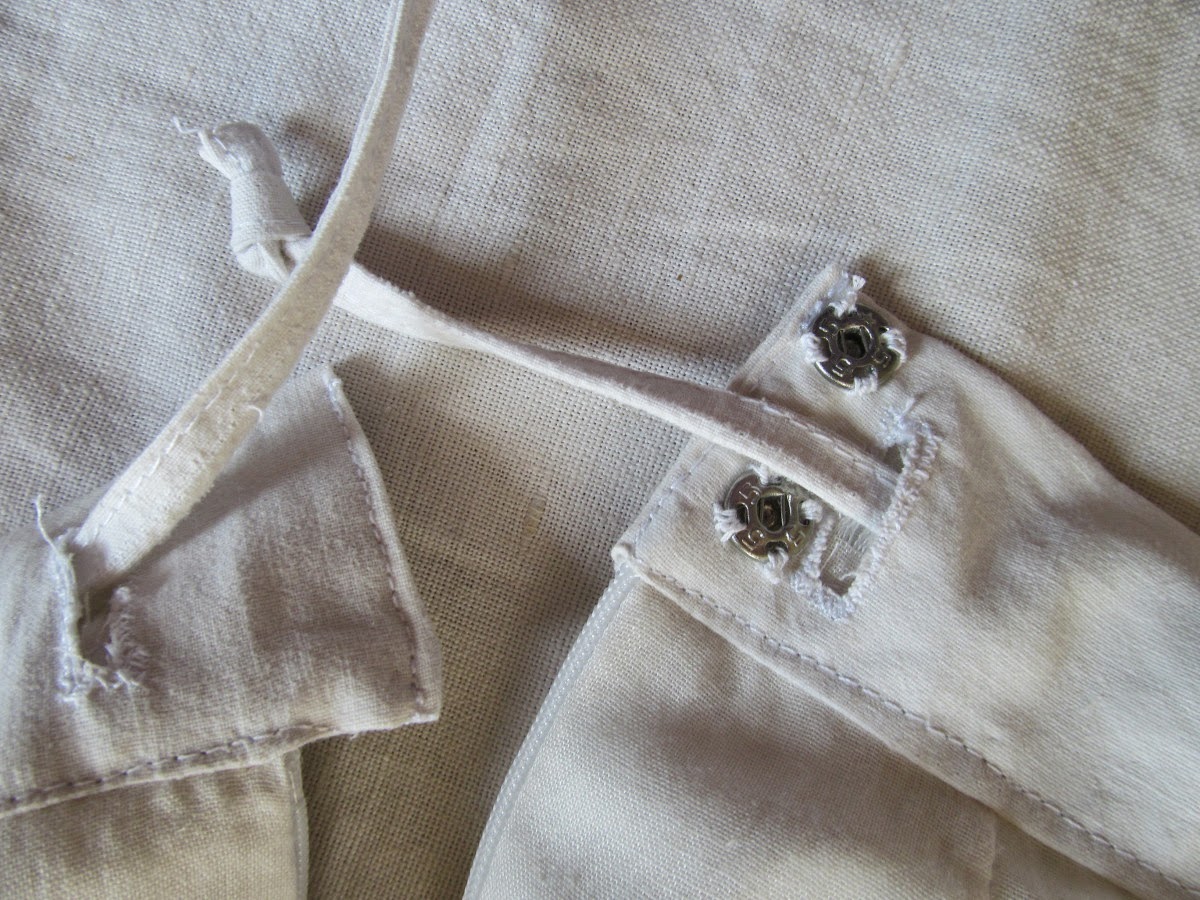 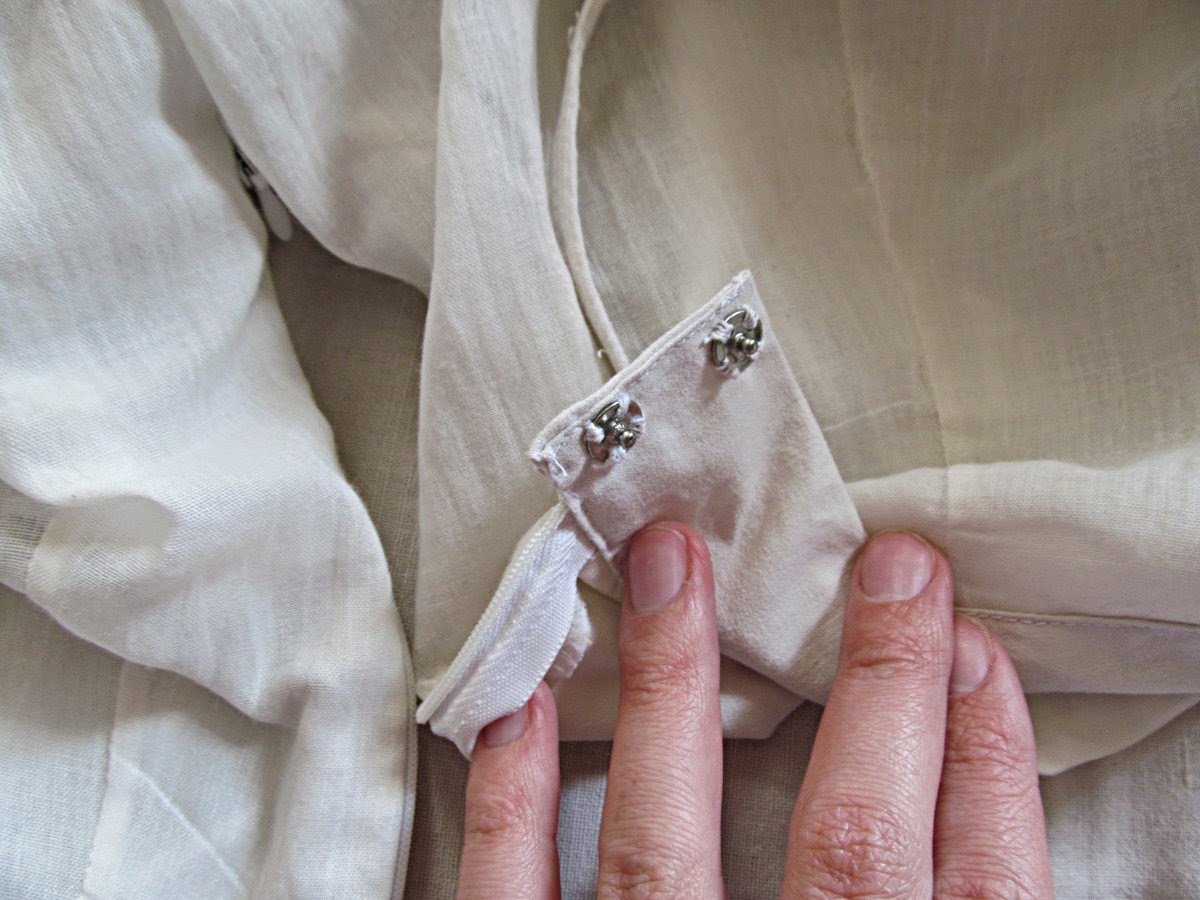 The skirt itself consists of an overskirt and a little underskirt / underlining bit at the top, the purpose of which is to strengthen the thin saree fabric, particularly for the sewing-in of the zipper (that was the original idea, anyway). 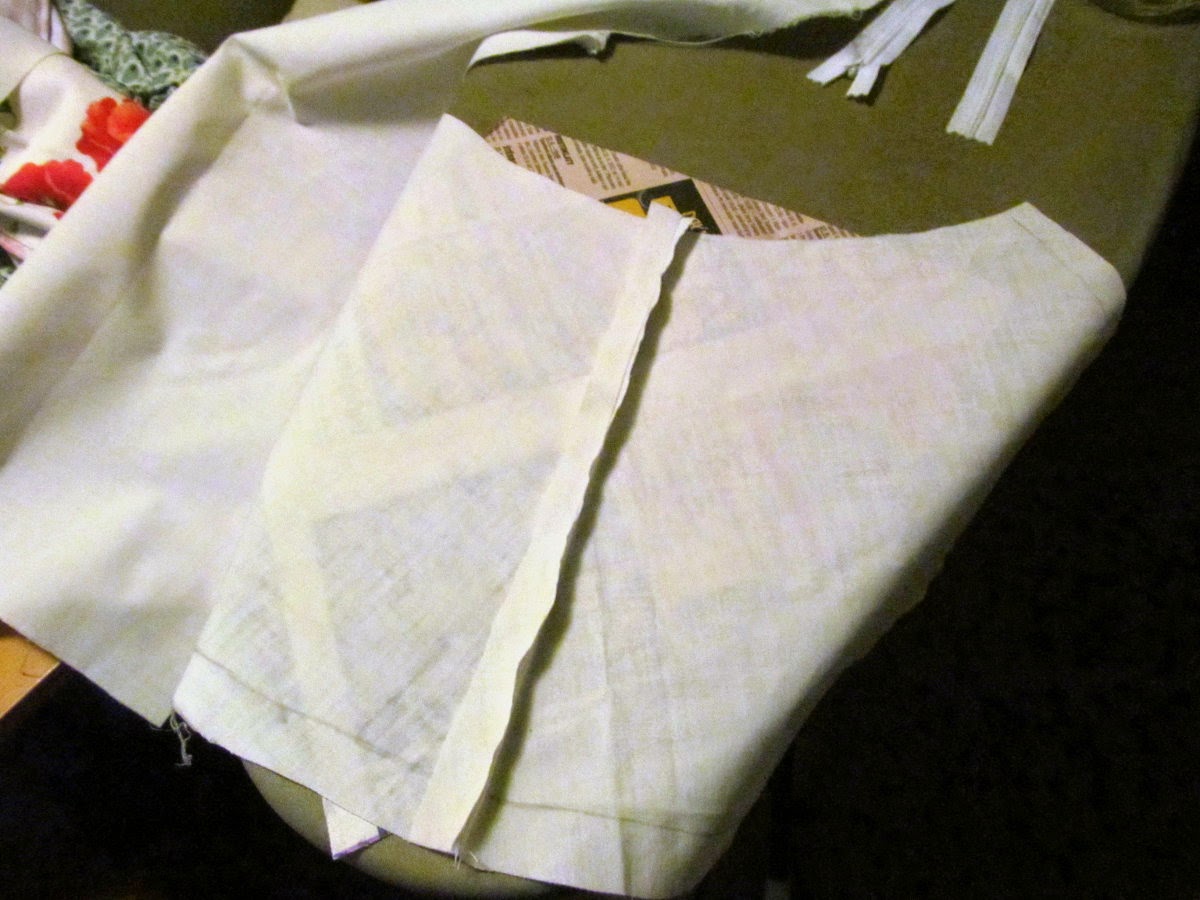 It's a simple matter pattern-wise, almost-circular, gored. I could not be bothered to make the underskirt with the same number of gores as the overskirt, but I did make it gored as well, not to throw the hang of the skirt too much. My sister the dancer was a bit dubious about the effect the underlining would have on the very lightweight skirt, but I the seamstress am now confident it was necessary. The skirt already began to pull at the seams at the top before I attached the underskirt, just from its own weight. It is a very lightweight fabric, but there's lots and lots of it, and there are those golden bits, too... 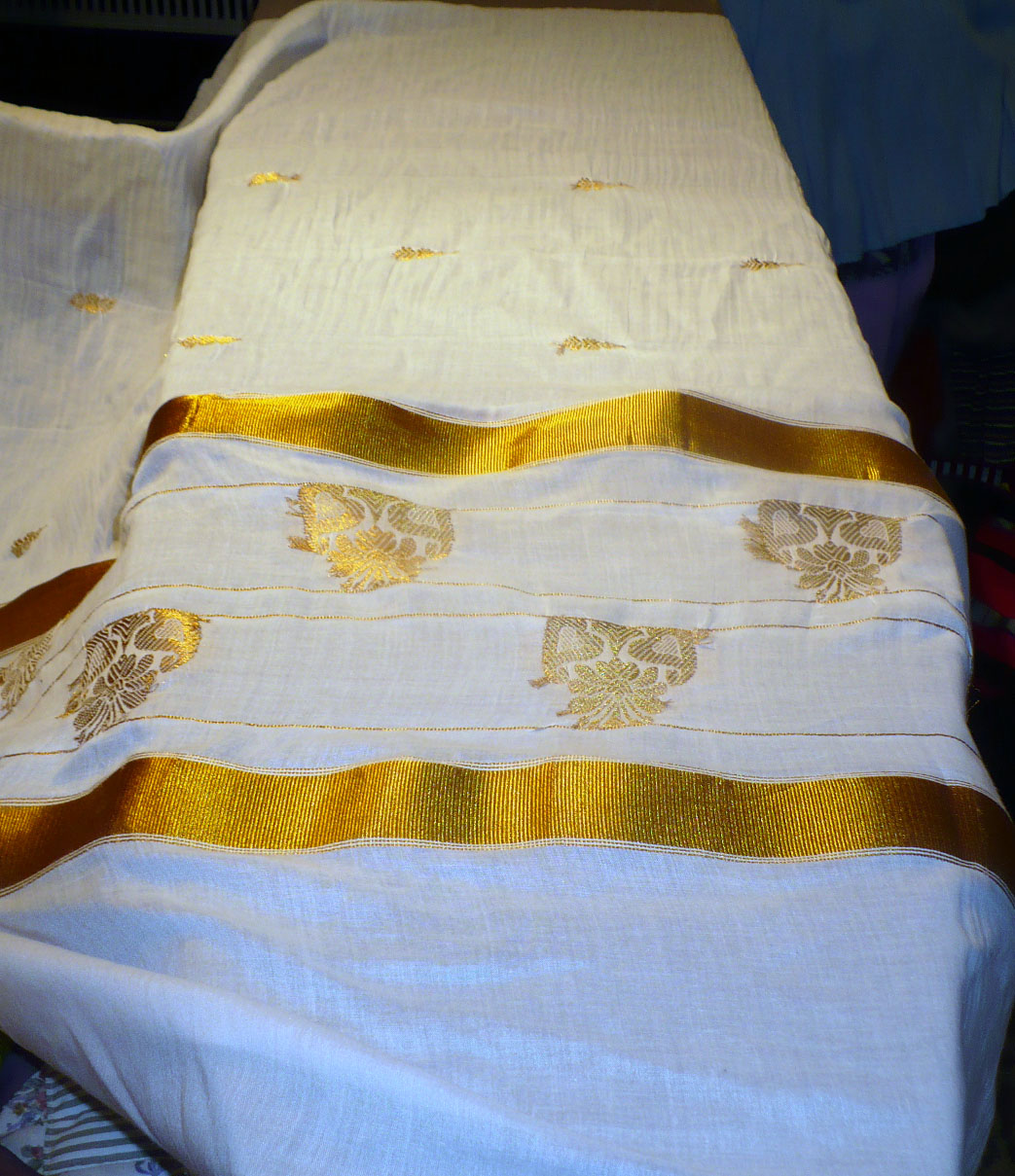 Like those golden bits at the top. I made myself a diagram, to space them evenly and to keep track of my progress (and was I glad that I could do that!). Only I ended up sewing one half of it from the right side and the other from the wrong side, so it ended up less evenly spaced, with four white gores and four gores with golden bits matched up on each side, instead of two white and two with golden bits on both sides. But I don't think anyone will notice when I don't show them. :D 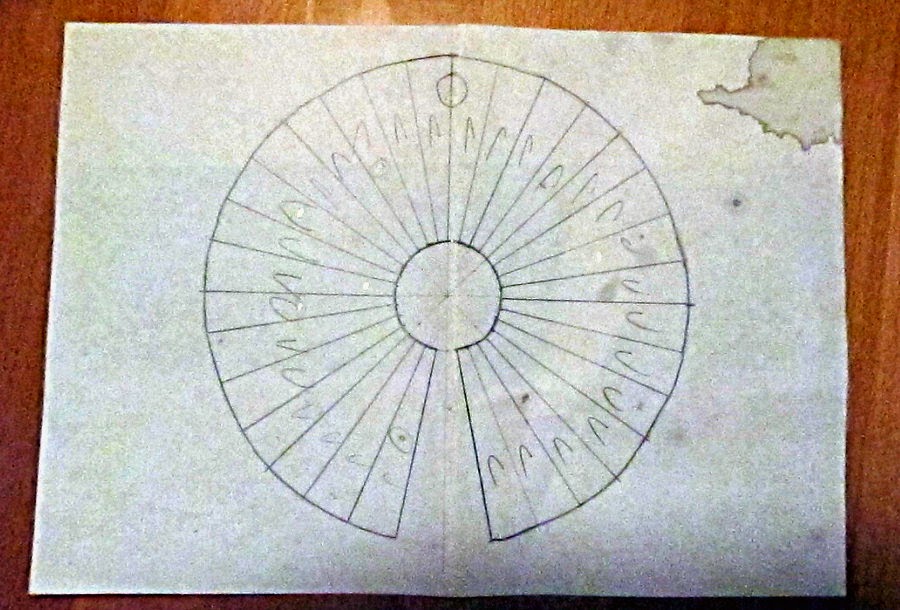 The paper with the diagram got to lie around for months and looks the part.

In the end, I could only squeeze 30 gores out of the saree, and thank God for that, because the skirt somehow still came out much larger in the waist than planned for!
Plus I was kind of going crazy halfway through. It's a boring job, sewing gores.

Good thing is, I got a really good hang of French seams by the end of it. I no longer bothered to press them during the sewing, just used my fingers, and it worked just fine. It's cotton. Don't ask me to make French seams in polyester or something, please.


Before cutting the gores, I cut off the borders of the saree, with some seam allowance, and sewed the two sides together into one long, long border that I then wrapped into a neat package (because, if you remember, it really likes to twist and turn). Then, later, it came attached to the hem. So the selvedge of the borders is the actual hem. It did not save me from lots of hem sewing, of course, but it was just another French seam, so I did not have to wrack my head for the best way to hem such a fine fabric, which would no doubt result in a disaster. Those clips and patches are bad enough. 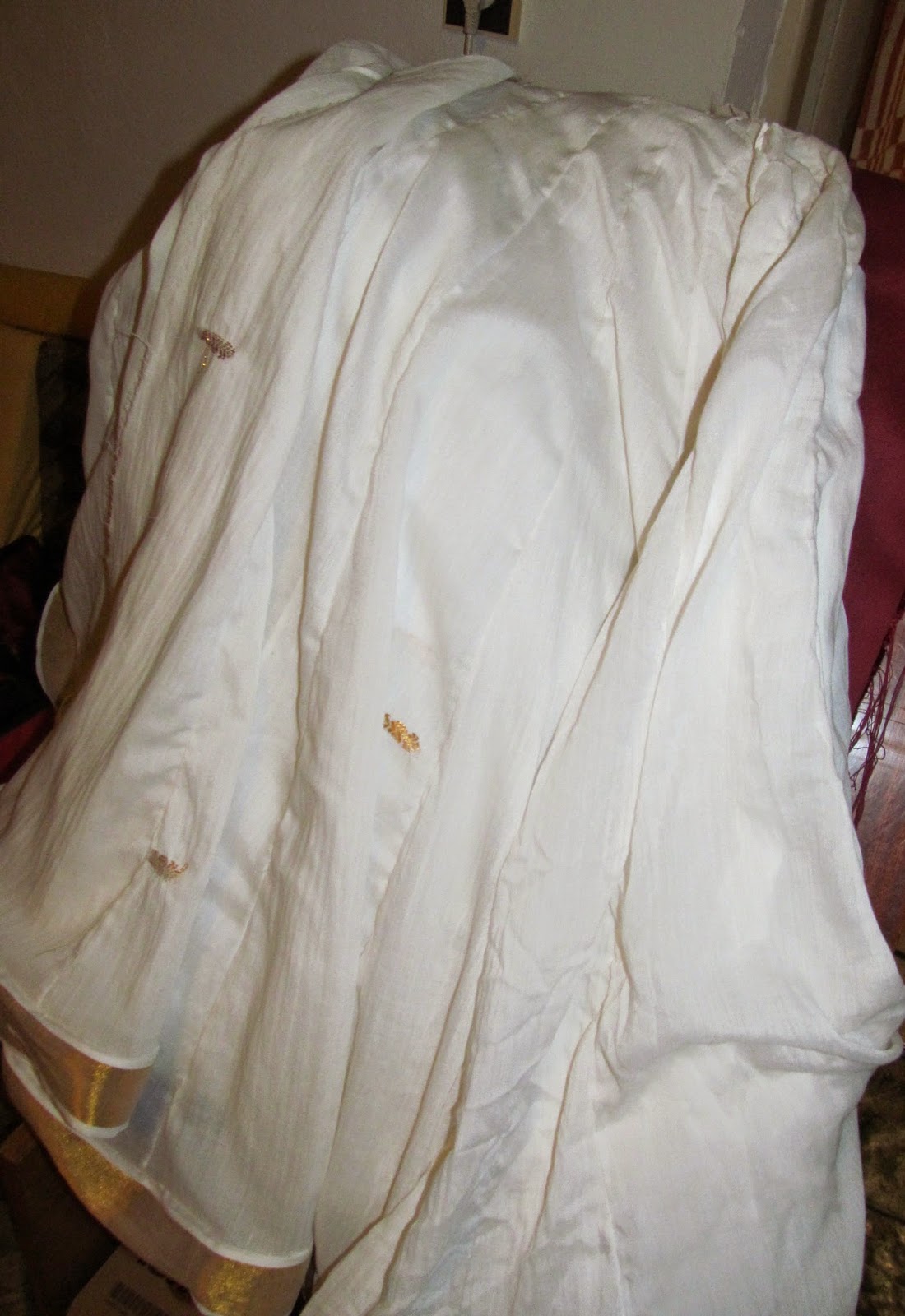 The thing kept taking longer and longer to finish. Part of it was, of course, me not working on it when I could have, but a huge part of it was it taking longer while I was. It's a thin, rather loosely woven fabric. It's cotton, so thankfully it does not slip too much (unless the whole lot of it is pulling that tiny sliver that's under my machine foot down from the machine, of course). But it's thin and loosely woven, and also very much likes to crinkle warp-wise. The seams on the gores are all off-grain, so it tended to stretch in curious ways and it all had to be pinned. Twice. And thirty times that.
The only place I could just roll away, no pins and no worries, was when I was sewing the border to the hem. The first time around. The second time around, I had to carefully pin every centimeter of those 5 meters. And then carefully remove every pin when I was sewing it, and still watch out that the border does not curl itself under my needle.

And of course, then I had to hem the curved hem of the underskirt bit, and instead of just zigzagging it, I had to do a rolled hem (ish). I'm happy to report that the method where you bast the hem allowance and then gather it slightly to fit it to the slightly shorter circumference above where it's supposed to go in the hem - that method works. It really does, when you finally get the amount you've got to pull it (not very much in my case). It just takes much, much longer than a stupid ugly-but-is-it-really-so-ugly zigzag would have.
I took a photo of the inside with that hem; but I was taking the photos in a hurry before leaving Brno for home, and now I've found out it's blurry.

And I had to handpick the invisible zipper. I need more feet for Ema. (Also, the fortunate rolled hem foot does not work on curved hems, so I had to employ the above technique.) 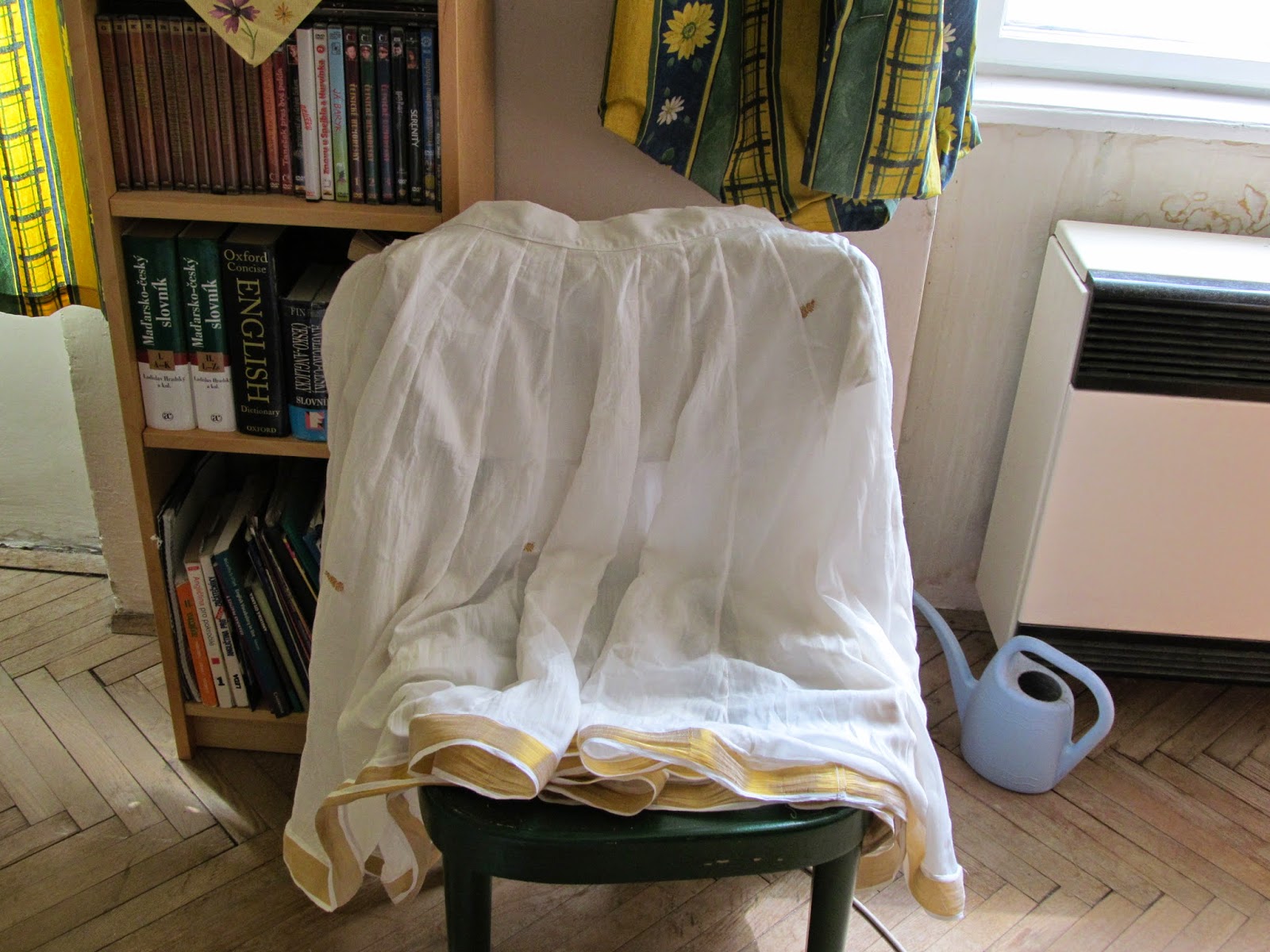 But, after all that, it is finished. And I have a long weekend ahead of myself and lots of sewing. For me. There's some Regency stays that need finishing, too...
Vystavil Hana - Marmota v 23:43