I've been stuck at home with a flu for over a week. After the first couple of days when I really felt awful, I now feel mostly okay except for a bit of a cough, a bit of a temperature and the fact any sort of physical activity tires me very quickly.
So I'm stuck mostly sitting down and trying to invent ways not to go crazy with boredom and do something more productive at least with my mind.

Which in Marmotaland sooner or later means DECIPHERING HISTORICAL CLOTHES.

I have corsetry on my mind, what with deciding that I need to make myself new Regency stays (my size has changed so much that I eventually figured out altering my old ones was probably more trouble than it was worth, alas). Along the line, I got to wondering about some 1830s-1840s corsets without bust gussets (I always have the 1840s low-key in my mind because the discontinued kacabajka adventures hang over me), and that led me to this c. 1840 corset in the Met. 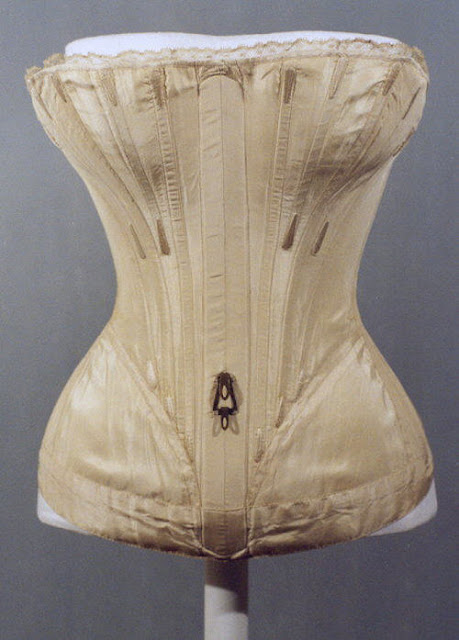 Atelier Nostalgia (who has recreated it and whose blog post directed my attention back to this particular one) noted that it has no bust gussets. Which she says was unusual but I think it was actually quite common at that particular point in time and soon ceased to be so for some unknown reason - plenty of the c. 1830s corsets are simple "princess seamed" affairs. She also noted that the museum helpfully provided lots of detailed photos.

Those photos are, of course, ideal for deciphering. 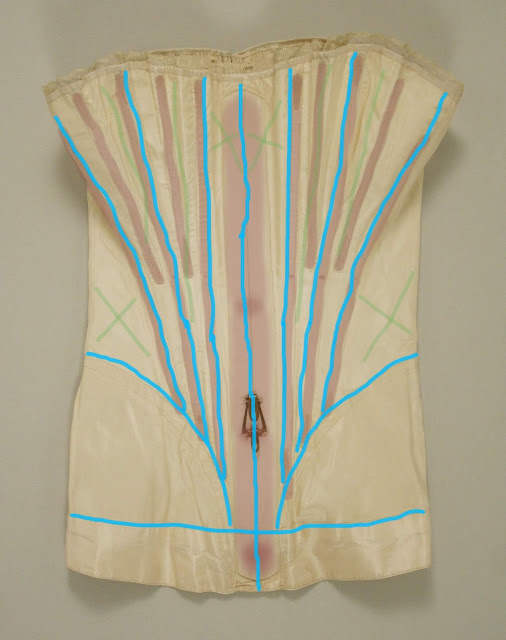 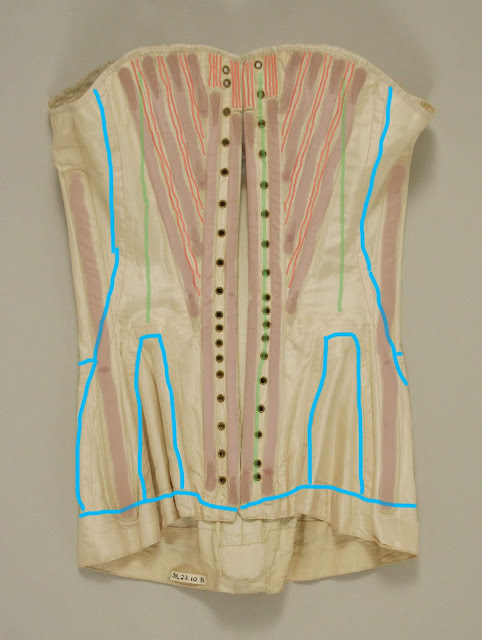 Blue is for seamlines between pattern pieces.
Purple is for boning and the front busk.
Red is for the very narrow boning channels which may involve narrow baleen (is it possible to make baleen so narow? I have no idea), or cording, or even reed - which you can totally still use in Victorian corsets! To which this 1863 patent by Lavinia H. Foy attests with this sentence: "Rattan and whalebone strips can be inserted in the usual manner..."
Green is for grainlines. Sorry for making it so pale; I didn't want to cover the details underneath too much with all my scribblings, and went a bit overboard on the transparency. It should be easier to see in the full size. (What's not accounted for in my pictures and what I did eventually figure out is that the front hip gusset is also cut on bias. I am still not entirely sure about the back gusset but I think it might be on straight of grain.)

The corset is made from satin, which is a beast for determining grainlines even in real life, let alone in photos. Luckily, some of the photos are VERY detailed, allowing me to make a better guess, especially because in some places the fabric is a bit worn, which exposes the yarns more and makes it less of a quesswork. Also the lining (see additional photos at the museum site) is plainweave, which also helps; although I think the lining doesn't quite match the outer, it does more or less correspond to it. 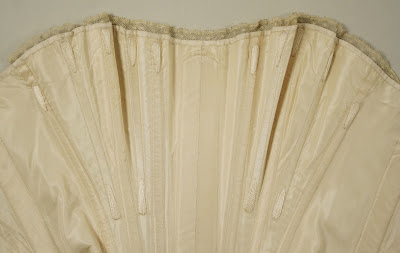 What struck me was that the centre front was not cut on straight of grain, and neither was the side piece - leading my train of thought straight back to my Regency stays enterprise and the Bernhardt stays, specifically Fig. F.


There are definite similarities between this corset and the Bernhardt stays when you look closely (aside from the aforementioned, the hip flare is basically just an addition to bring the corset lower down the hips). That got me so excited about this corset as a possible sort of missing link between Regency and Victorian styles that I went ahead and roughly drafted out the pattern for myself in Inkscape, more or less following the principles lined out in Cathy Hay's Corset Making Revolution article.

Well, obviously I haven't made a mock-up yet. But my experiment did yield a pattern that looks like a good starting point for that. It's also similar to this 1840s corset on the Abiti Antichi site (which still has shoulder straps and on the other hand seems to have some sort of proto-opening-busk), so it's probably a very good basic style for the 1840s. 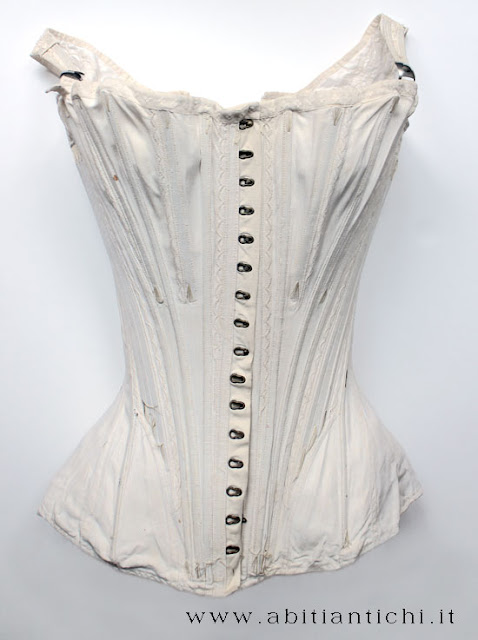 But more than that, as Atelier Nostalgia also noted, it's also a style that you can find it later corsets as well. And not just the 1850s. It looks surprisingly similar in principle to a couple corset patterns in patents from the 1860s and 1870s on the Haabet site.

And, from my browsing of museum collections, it also looks like a style that, with slight variations, carried all the way to the 1880s. Most 1880s corsets tend to have wider fronts, though, and are usually more along the lines of the gussetted or princess-line corsets you can find in commercial patterns. But you can still see elements of this sort of construction even in some later corsets. 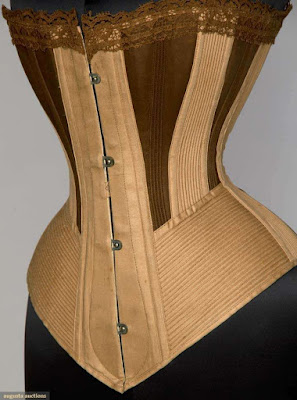 The difference being mostly the fact later corsets have opening front busks, cross-lacing, and tend not to go so low on the hips. Many of them also utilise bust gussets instead of the bust seams of this particular style.

All this basically means I've developed a method of drafting a certain kind of Victorian corset pattern that can work, with various alterations, for a period of about 50 years from the end of the 1830s to 1880s! It's different enough from the commercial patterns I'm aware of, and yet ubiquitous enough in museum collections that I think I really hit on something here. 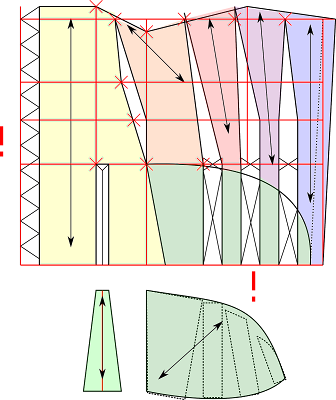 This is what I eneded up with. It will still nead fine-tuning, especially in the underbust area, but it's definitely a workable start.
(The exclamation mark on the left means my division of the waist is imprecise because what I really needed was decimal point numbers and I couldn't do those quite so easily in Inkscape without changing the grid - which is a bother, so I'll get around to that in paper stage. Basically at this point there is zero waist reduction and I think there needs to be at least a little bit of it.
The exclamation mark at the front hip gusset means that particular seamline is in serious need of truing - and the hip gusset will need some slashing-and-squishing after I get around to altering the waist.)


In order not to make this post too long (more than it already is), winding and difficult to navigate, and in order to make it easier to make stuff linkable (I'm not flattering myself to think this will be linked, am I?), I will eventually put the whole drafting method for this particular style in a separate post, probably after I've had a chance to make a mock-up and really see how well it works. Although now that I have shared an actual flat pattern draft, I guess you could also just apply Cathy Hay's method to it without waiting for the next post. :D

And when I get around to physically drafting this pattern, I'll definitely do some sort of further pictorial comparison between it and the Bernhardt Fig. F to prove my point. It's not quite immediately obvious - especially because the distribution of seams is a bit different - and I don't think I'd have thought of it had I not been drafting the Regency stays just before. But that front dip, slight bias in the front and bias on the side (also just slight in the Bernhardt stays) did make me wonder. If you lengthened the two back pieces and the front tip of Fig. F, and introduced hip gussets, you would get something approaching the 1840 stays and all those subsequent styles! 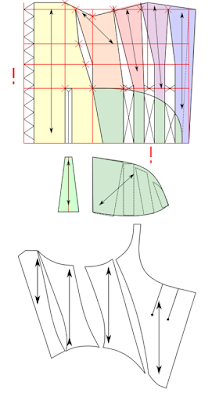 What I will share here regarding the drafting is this: I knew, instinctively, that this drafting method might work because I've done it before with my first Regency stays. I looked at lots of photos of extants. Focused on seamlines and where they sit on the body. Drew myself some technical drawings. And drafted the thing in a grid following my own measurements in a method similar to what Cathy Hay does - except that I used a lot more measurements to make sure it really fitted me.

So yes, this can totally be done just from photos - as long as they are decent quality and you have more than just one view. Look where the seamlines sit on the body. Find the underarm line (3 in my plan below). Find the waistline (C) and underbust line (B - in this case it's a lower underbust). Figure out the grainlines. Go from there. 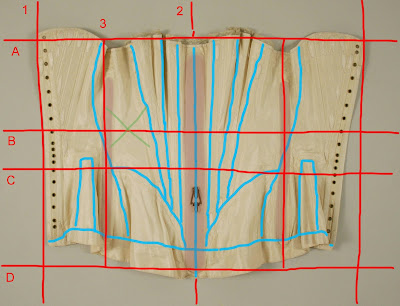 In this particular case, I was lucky because the museum even provided a flat photo, so I could use that as my rough starting point for a flat plan (and use some common sense to account for the distortion).

If you don't have a flat photo - I didn't for my Regency stays, both because there aren't that many online in the first place and because the stays were an amalgam of many individual garments - draw yourself a sort of gridded flat plan first, not bothering with exact measurements for now. Make several such plans if it helps you to make sure you understand how it goes together.

And then you fine-tune that plan with actual measurements. Make your default horizontal lines the length of the biggest measurement of the main pattern pieces (excluding gussets), minus your preferred lacing gap, and go from there, leaving gaps where your other horizontal measurements are smaller. Or (like Cathy Hay) go with the bust, overlapping your pattern pieces in places where you're bigger (hips).

Meaning that for this particular corset - with its bust seams - I went with the bust measurement for my horizontal lines (and added the gussets for my hip / upper hip measurement, which is slightly bigger than my bust). For my Regency stays, I went with the underbust (because I was using both bust and hip gussets and really needed them to fit snugly at the underbust).

If you're drawing on paper, it may help to start with a scaled down pattern (in pencil!) to see at one glance if you're really going in the right direction. Your scaled down first draft can also double as a draft for your boning layout. (Or do it like I did now and draft your pattern in a grid in Inkscape or similar vector graphics program - that has the advantage of allowing you to correct mistakes cleanly, including the "back" function.)
That draft is your first dry run. It will help you catch any mistakes and things you forgot to take into account before you draft full-scale on paper. (There will totally be mistakes and things you forgot to take into account. On my first run through this pattern, I completely forgot to take into account the bust-to-waist difference in the back, and the fact you want your corset to dip in the underarm area. Among other things.)

And even then, always make mock-ups. :-)


You could apply the method to other items of clothing as well, but what with them not sitting close to the body like a corset does, and involving things like pleats and gathers and sleeves, that will involve even more trial-and-error. But it can totally be done, as Sabine of Kleidung um 1800 and Bránn both demonstrate. Especially if you start with something simpler like an apron, and something in a patterned fabric like a check that makes it easier to determine pattern shapes.

So that's my five cents concerning drafting from photos. And 1840s corsets. Some people seem to think the 1840s are boring. I hope I've just proven they're far from that.
Vystavil Hana - Marmota v 21:00