Welcome to the Historical Sew Monthly 2018! If you are new to this year-long event, you can read all about it on The Dreamstress’s website here. I've volunteered to write the inspiration post for the first challenge of the year, which is:

Mend, Reshape, Refashion: Mend or re-shape one of your previously made historical clothing items, or refashion a new one out of something not originally intended as sewing fabric. 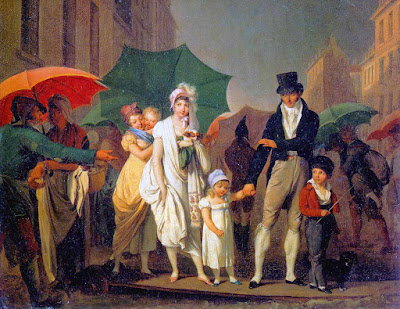 Now, if you’ve been making and wearing historical costumes for a while, chances are you do have something that needs mending, or updating to match your current skill set and knowledge, or re-shaping to fit your current figure (or somene else's) better.

Like I did for the November challenge of 2017 (which I haven’t yet blogged about, typical for 2017). I had never been satisfied (and finished) with the inside bodice flaps of my sleeveless 1800s dress, and one of them finally tore, and possibly also my bust has increased a little since I made the dress. So I finally replaced the unnecessarily fussy drafted shape of the original flaps with simpler, more historically accurate (and slightly wider) rectangles. 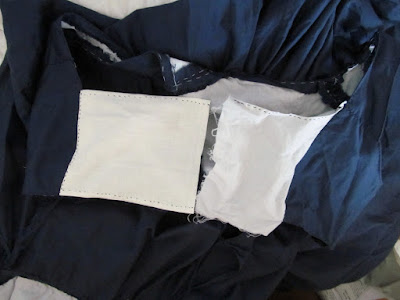 On the right, fussy flap shape drafted with modern drafting sensibilities (notice the neckline curve); on the left, the new rectangle

Mending is something that undoubtedly happened with clothes all throughout history because for most of history fabric was quite valuable; although conservation bias often leaves us with the special, lightly worn clothes rather than those that were worn within an inch of their clothing life.

While searching for things to showcase here, I came across Bránn's and Pat Poppy of Costume Historian's posts - they have already done some of the research into repaired extant clothes in the earlier periods I don’t habitually look into. So thanks to them, I came across extant clothes like the Bernuthsfeld tunic and these heavily patched sailor's clothes: 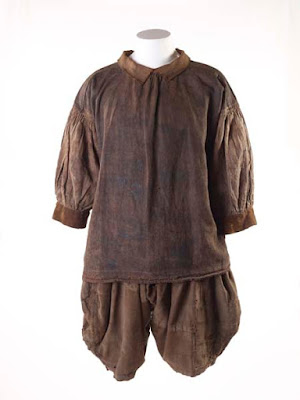 These are indeed clothes worn to within an inch of their life, probably by people of lower classes who had no other choice. But mending is not just like that... Wedding dress of Maria Theresia Countess Czernin, née Orsini-Rosenberg, 1817, from the collections of the chateau Jindřichův Hradec (photos mine from an exhibition in chateau Dačice).


There is a patch here underneath the raised waistline. (I was so excited the photo came out blurry...) To tell the truth, I do not really know whether the patch was added during the countess’s life or during the ages since; what I like about it is the fact it proves that yes, these fine fabrics do tear and did tear. If they tore for Mrs Allen in Northanger Abbey and for Countess Czernin, it’s par for the course with them; go ahead and try mending them as neatly as too make Mrs Allen proud.


Reshaping clothes is another option. And because this often happened with clothes that were of better quality (so that one would get more wear out of the expensive and still nice fabric), you can, I think, find many more surviving examples of unpicked seams and other alterations than there are of patches, if you only peer more closely at museum garments and their online photos.

You can just adapt a garment to a changing figure, or perhaps you can make something for a smaller figure than the original garment was intended for... 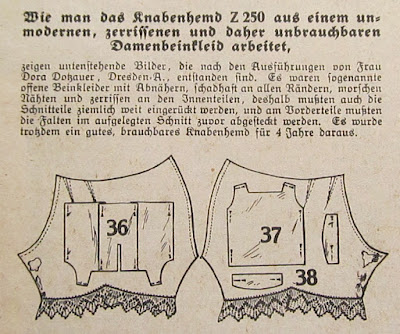 Instructions for cutting a boy's undervest out of old lady's drawers in the Handarbeit-Wäsche-Wohnung magazine, 1933, Otto Beyer Verlag, Leipzig-Berlin


Or, what you could also do is reshape a garment to match new fashions (or new costuming interests). There is, for example, a number of 1790s-1800s dresses re-made from earlier ones; the huge amount of fabric in rococo dresses allowed the update to the more streamlined high-waisted fashions fairly easily. One of my favourite examples is this 1790s dress in the Met, in a fabric very unusual for the era; if you zoom in, you can even see the seam running above the hem where fabric was added to accommodate for the longer skirt of the raised waist – the join is nearly lost in the busy pattern but in the side view, you can clearly see there are non-matching vertical seams towards the front... 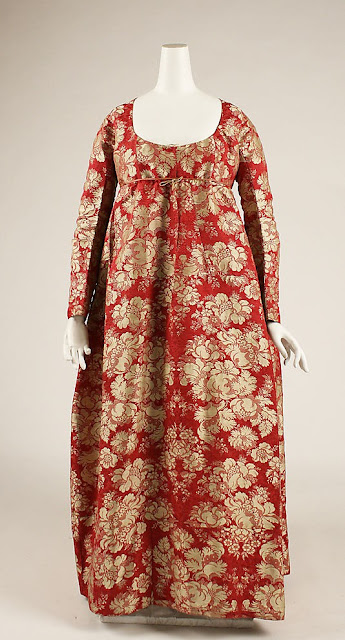 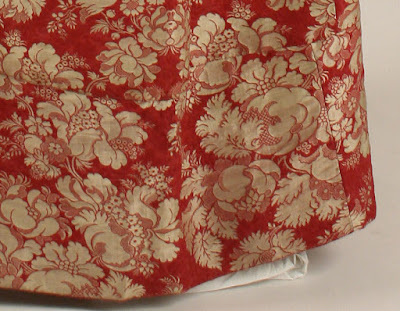 (Preferrably, though, don't do this to garments that are already antiques.)

Piecing was common historically, both for re-made dresses and just to get more out of the narrower fabric goods available in the past. So it can also be used with aplomb to get more out of something not originally meant to be sewing fabric: in HSF 2013 (back when it started and was still the Historical Sew Fortnightly), Sarah awed everyone with a pieced 1840s dress squeezed out of a tablecloth.

And there are many other fabric items one could do something with! Curtains and bed linen are popular with costumers (not just characters on film), because home furnishings these days often revive patterns that passed out of fashion for clothes decades and centuries ago. Perhaps somewhat less creative, but a perfectly good choice for this challenge. 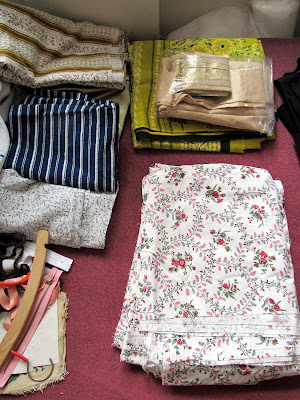 Part of my fabric stash, with 18th-century-patterned IKEA duvet covers in the forefront - the same ones Magpie Tidings made a lovely reproduction of a 1780s dress out of in 2015. My plans for it are currently for a 1790s one.
The flowered golden stripes in the background are another clearly historically-inspired print - but unsuitable for this challenge because it's fabric meterage. Neither would the green sari work: it's also basically just meterage. (Leimomi says that a used sari is acceptable, but a new one isn't.)
In the lower left corner, a peek of embroidered panels & chain of an old frame bag I took apart to clean and remake, back when I did not have the good sense to realise how old the original probably was and take pictures. It's a project stalled for many many years by a lack of matching materials and bag-sewing confidence; maybe I could finally finish it now...

Even thrifted clothes can be used: I like them as a cheap source of smaller quantities of really nice materials I could not afford otherwise (like silk); which can then be used for example to make pretty accessories. 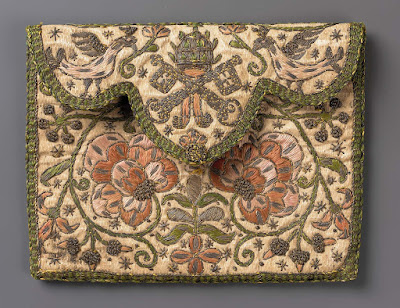 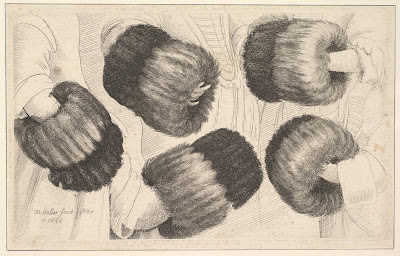 Václav Hollar: A Muff in Five Views, etching, 1645–46. Metropolitan Museum of Art, Accession Number: 17.3.1477
Positions on fur differ; personally, I think re-using them when they are already out there is more respectful to the animal than just throwing them away. And faux fur is always an option, of course.

Or you could even sew stockings out of thrifted knit garments. 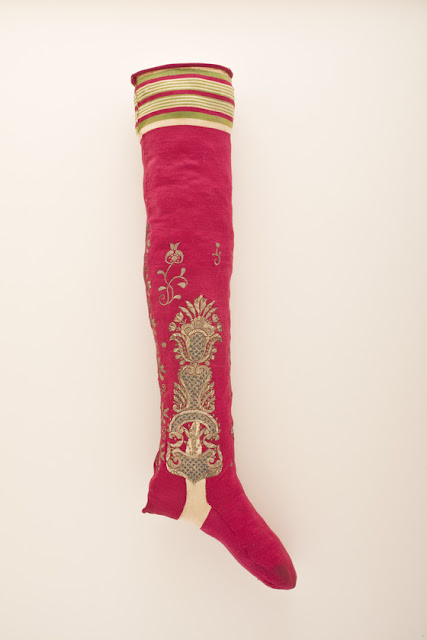 Pair of Woman's Stockings, silk knit with metallic-thread embroidery, Europe, 1700-1725. LACMA, ID: M.2007.211.134a-b
Silk knit garments will probably be hard to find, so one may have to compromise on accuracy there. I have seen a couple of early 18th century stockings with such horizontal stripes at the top, which, if you're lucky in your thrift shop finds, could allow you to piece them out of several garments.


Or you can alter existing accessories, like reshaping hats into historical headwear, and trimming them. 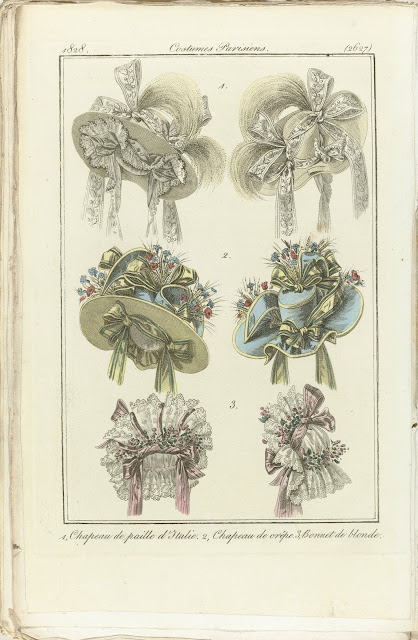 But if you are at the beginning of your historical costuming journey, making undergarments is a very good place to start your wardrobe, and the plain cotton fabric of something like bedsheets can work quite well for that purpose! (Especially since cca late 18th century – before that time, cotton was a more expensive option than it is nowadays, and linen would be used originally.) 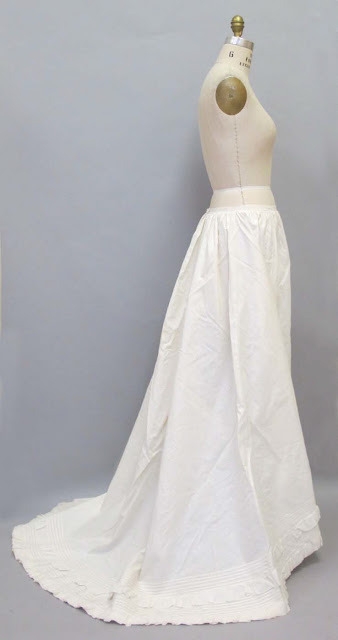 On the other hand, if you're feeling confident and adventurous, you could take the idea of the challenge even further and do as the maker of this bag did: they stringed cloves like beads. (Isn’t it wonderful that it survived to this day? There's also a cloves necklace from the first half of the 19th century...) 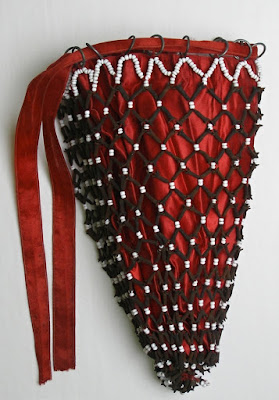 While for the sake of expediency we speak of fabric in the challenge description, you can use other techniques and unusual materials (as long as they form a substantial part of your challenge item). Seeds could also be used for jewellery: simple rosaries are traditionally made of bladdernut seeds in Europe, and Adam Mickewicz’s heroine Zosia in Pan Tadeusz (depicting events in Lithuania in 1811-1812) has a set of earrings made of cherry pits that she got from a childhood admirer. For those of you in the southern hemisphere, this might be a chance to enjoy the summer in brand new ways! :-) 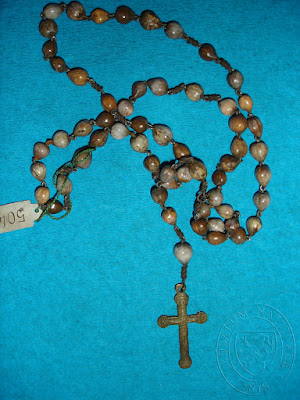 And those of us in the grey grip of winter could perhaps unravel a few thrifted items and knit ourselves something warm and colourful. 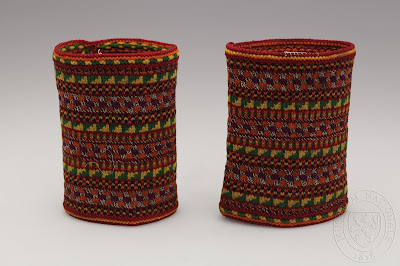