Some great news: Uměleckoprůmyslové muzem in Prague put all the photos of their public domain items on esbirky.cz in public domain. Which means you can download big pictures of things like Art Nouveau prints and jewellery. And clothes. Here. ETA 2018-07-31 Sadly now the Esbirky site itself prevents download so even the pictures from museums that originally made it possible are now barricaded up by web design.
Some worse news is, the digitalisation is apparently slow, because there's only a fraction of the clothes I know they could put up. None of their lovely Regency or 1840s clothes yet, no better picture of the 18th century silk corset or 1850s bodice. And the search engine on the esbirky interface is dubious, possibly faulty: when I search for "korzet", it gives me no results, even though I know there is at least one corset there. 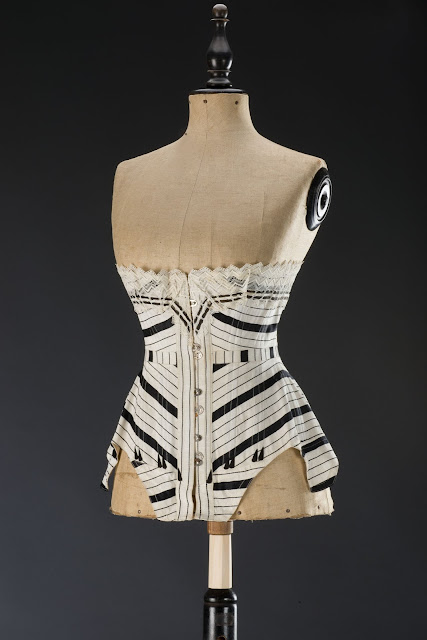 Where the 1840s bodice's plain fabric allowed for deciphering, here it's the stripes. And the quality of the image. As I loked at it and tried to figure out the probable shape of the pattern pieces (it's a bit of an automatic mental process by now), I thought "I've seen a corset patent like this."

And indeed, I had. The helpful Haabet site lists them by various criteria such as number of seams at the waist, so it didn't take long to find the one I had in mind.

Mr Albert P. McGraw argues in his accompanying text that this principle of costructing the corset allows for a much faster and economical construction. And that while he provides this particular drawing, the patent applies to the principle rather than the particular shape. I wonder who stole the idea, the Czech manufacturer of the corset above, or Mr McGraw? Or is it just a coincidence?
ETA: Option four? I looked through my book on Czech fashion 1870-1914, published in conjunction with the UPM, just to see what else they have in their collections. And there it was - not this corset, but ads for the "Korset Radical", made by the corset factory Federer & Piesen in Prague, and advertised as using a patented pattern. Patented where, by whom, was there an affiliation? Mysteries!
It explains their dating of the corset, though - the first of those ads, showing a similar one, is from 1905.

Anyway, to complete the deciphering, here's another colour-coded picture, as far as I'm able to tell: 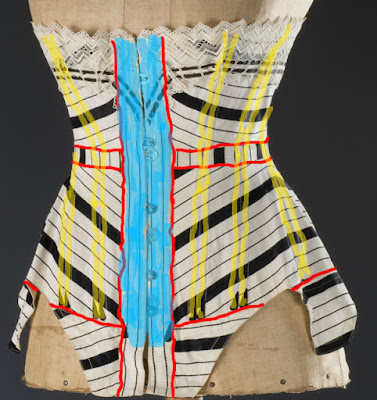 I didn't bother with grainlines, for obvious reasons.

It looks like it's more or less the pattern pieces from the patent, with additional strips to cover the busk and for the lacing (as described in the patent's text); with a different boning layout of doubled bones: running over the bust, beside the bust and curving slightly closer to the front in the bottom, at the sides, and probably still more in the back. And additional, unboned pattern pieces in the front and at the hips, probably for garters and maybe also to smooth the hips somewhat, like in later, 1910s corsets. It actually looks like an interesting transitional piece to my eyes inexpert in this period - it retains the hourglass shape, but it's an underbust corset and has that hip action going on. But notice there's more room in the hips than the mannequin has... it's definitely aiming for a very curvy figure rather than the later slim styles. The curving of the boning layout suggests an S-bend.

The lace is, as far as I'm able to tell, simply folded over/gathered around the corners in the front to form that particular shape.

I hope these types of analyses could be helpful for someone. I really liked when American Duchess did the Costume Analytics, and it turns out I may have a better eye for this kind of thing than some other people, so it gets its own tag, "Deciphering historical clothes." I can't promise it will be a regular feature and I definitely won't promise I'll do what you ask me to do. But I think I would like to know if it really helps, or what may still be confusing, or what else you might need to know if you do have trouble deciphering clothes. :-)
Vystavil Hana - Marmota v 14:38