Sooo... better late than never, right? This could have been earlier if I had not gone to cinema on Sunday, had not had to read a long novel on Monday, and had not just enjoyed the Spring and listened to the blackbirds on Tuesday. Oh, and then somehow I took a photo except it was not there when I looked. Or maybe I did not take it after all.

That's all right: because I could not find the original photo, I went to the garden today and took photos on my Indian shawl. Which is infinitely better for a Regency-ish necklace than a photo with a plain wood background would have been. 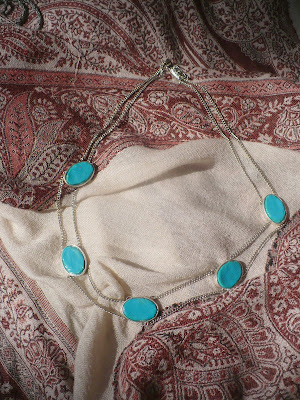 This necklace was inspired by the necklaces I posted a long time ago. For a long time, that shop did not have any medallion components with more holes than one. When I finally got some, they were silver. Then I could not find my white acryllic paint; and then I realised it was a good thing because white against silver would not look as good as it does against gold. So I took a cue from the malachite jewellery in the UPM instead. My colour ended up a bit more turqoise/teal... 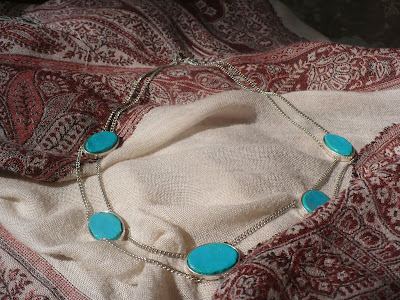 So the butterfly necklace still looms before me as an idea for the future. This is a test necklace. A muslin, so to say.
The "stones" are made from an air-drying terracotta modelling paste (which is suspiciously paper-like in some respects) that I got years and years ago for birthday or Christmas. I had never used it, because while I liked modelling, I did not know what to use it for - it seemed too precious to waste on some experiments that would be thrown away years later, and because of its nature, it could not be used for more sturdy projects that clay would normally be used for.
The process - cutting the shapes from the paste, letting them dry, painting them with acrylic - still leaves something to be desired, but it's generally a good way to use the materials in my present situation and interests in life.
It'd be great if I reached a level of skill with the material to actually make reliefs like on the UPM jewellery, but I don't think that's very likely to happen anytime soon. I never achieved that level of detail, not even with conventional clay.

Fabric: Obviously, none.
Pattern: Likewise.
Year: 1805-ish.
Notions: Metal jewellery components (medallions, chains, rings, closure), air-drying terracotta modelling paste, acrylic paint, glue
How historically accurate is it? As accurate as it can get with the list above... Also, I've only seen gold necklaces of this kind so far, but I could not get gold components.
Hours to complete: I'm afraid I lost trace, as I made it over a longer course of time. Not counting the drying of modelling paste, paint and glue, about 2-3 hours? With it, several days.
First worn: This Thursday to school, just because.
Total cost: About 130 CZK for the components. The modelling paste was a gift. The cost of the paint and glue is just a fraction of the cost of the whole package...
Vystavil Hana - Marmota v 13:35