A splash of news; a pants pattern

This blog has been... rather boring, recently.

I had caught a flu that left me not wanting to do anything, except sleep, and stuck in my school flat. It's better now: on Saturday, I hopped to my hometown to cast my vote in the first ever direct Presidential election in the history of this country.
The candidate I voted for did not win. Actually, no one has won yet, but the candidate I voted for is not among the two who have to be decided between now.
That's life. At least one of the two who are left was my other option - I seriously decided at the last moment.
The first ever direct Czech Presidential election was, of course, surrounded by some controversy, but it's not the sort of controversy you got to observe with the US elections. It was rather the controversy of a hastily prepared Presidential election. Oh, and this.
That's life, too. No, scratch that: that's the USA and the Czech Republic for you. At least we do not have to wait for the actual results so long!
And it proves that pre-election polls and predictions are not always right. (Schwarzenberg also has, as far as I'm able to determine, quite a Facebook following - which I guess is mostly independent of his own campaign.) Looking at who writes about it in English (not so many news sites, mostly non-Americans...), and what they write about, is interesting. It gives you a fairly good idea of what sort of bias a media has...

(... which reminds me, why is the university library's Politics section full of books on Jefferson, Kennedy, Reagan, Eisenhower, but not a single one about Truman? Lots and lots of Masaryk, too, but if any school ever had a right to be overindulgent in Masaryk - compared to others,
I mean -, this is it.) 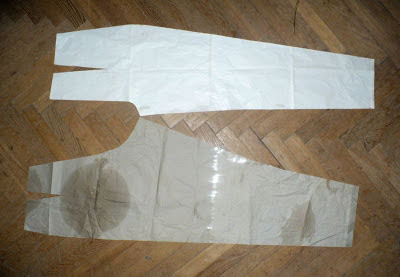 One of the things other than sleeping I did was copying the pattern of my best fitting pair of pants.
My best-fitting pair of pants is a mysterious pair I found in my wardrobe. (I think it used to be my sister's, but I don't recall it ever having gotten much wear.) It's not my best style (I'm all into boot cut, or this; I think it balances out my short legs and wide hips, though that's up for debate), but they fit me better than any of the others I own. It's a pair of pants I can sit down in on a cellar floor without having to worry about exposing my back. And they're theright length for my short legs, without having to be shortened. So, of course, they were the best candidate for copying for pattern.

Have you wondered about the Jean-ius class on Craftsy, or even taken it? My reaction to that was mostly "I don't want to pay so much for something I can figure out on my own, especially seeing as I do not have a perfect pair of jeans." Turns out that I was right, as far as the pattern-taking is concerned, and did figure it out on my own, more or less. Of course, I have yet to make a muslin of that pattern, and other things have preference - I only made the pattern because I had those pants with me.

What's really interesting about the pattern, though, is the fact that the back piece is much wider in the crotch than the front. It makes sense, too. See what I mean? 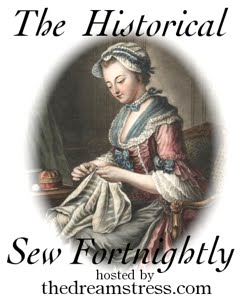 I'm obviously not finishing any of the challenges in the Historical Sew Fortnightly, yet. I definitely do want to finally finish my Regency stays for the Under It All challenge, though. At least. I'd be happy if I could finish something for the UFO challenge, too, but I think exams make that rather less likely... Maybe if I finish the stays earlier, they'll count as an UFO, and I'll quickly whip up a medieval-style bra for the underwear challenge? :D But with my track record, I do not think that is very likely, especially seeing as I won't get back home to the Regency stays until Thursday evening, and I have other things to do...
Anyway, this challenge/sewalong is the perfect incentive to actually make some of all those historical things I keep talking about.