It's actually a FO.


Well, more of a working prototype that's terribly patched together, but considering the prototype had been a UFO for a very long time, I feel good checking it off the mental list.
Inspired by the famous Kyoto Costume Institute pair of wraparound brassiere and a brassiere based off it that used to be sold in the online Jane Austen shop (but cannot be located now I found it), which had a back, I tried to make my own transitional undergarment. It was back before I had read up more about corsetry, though. So, stupid yours truly made the pattern from a modern sloper, and just took the ease off unscientifically (as we say in German/English-infested colloquial Czech, "baj voko"). Of course it was not tight enough in the important spots (and I had no idea what the important spots were until I found out they were not tight enough), so a lot of crazy alterations happened, and it took me much longer to make than by rights it should have, because somewhere along the way it got thrown away as a UFO I did not feel up to perfecting at that point.

The imporantly tight / fitting part: the back. I had to shorten the straps first. Darts were added to the back and a panel to prolong it was added (because it rode up when I shortened the straps), again it was not tight enough on the bottom, so a gathering line of stitching was added (now hidden underneath the binding). It's far from perfect. 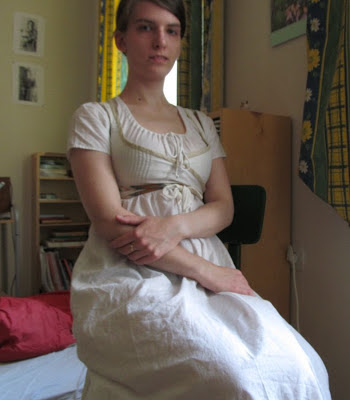 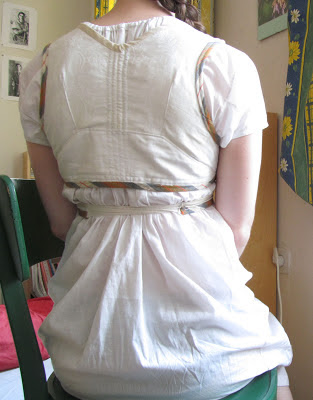 But in spite of all the trouble and not quite perfect fit, I think it gives me a fairly nice transitional late 18th century / early 19th century silhouette. Compare here. I definitely want to make a finalised pattern, maybe with lacing up the front instead, like folk bodices or some transitional stays I've seen in online collections, and give it another go with a better fit.

Unlike the inspiration pieces, my brassiere is just corded, not boned (with some of the last hemp cord I found at home - ordinary shops no longer carry it here! Horrible. I'm still re-considering what to cord my stays/jumps proper with.) So I guess it would qualify as transitional jumps? 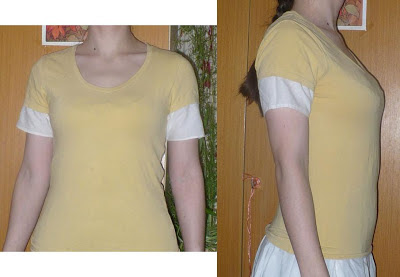 After I took these T-shirt photos, I found out it fit better if I pinned it together in the front centre, as seen in the photos above. So these are not quite as representative of the fit as I originally thought, but still.

For comparison, two photos with a modern day bra, one that goes from normal (first photo) to push-up (second photo). There's not that much difference between the push-up and the jumps / stays, other than the additional bulk (chemise + wrapping stays? Definitely adds bulk) and the smoother, less separated front. (I was wearing a very clingy T-shirt, so it all shows well...)
It wears very differently, though, not that surprisingly. It took me a while to figure out the best way to put it on, but now that I have, I actually find it more pleasant to wear than a bra, maybe because currently all my bras do not quite fit either... I even fell asleep in it, in my not-quite-healthy-yet stupor. It survived nicely and felt much better than falling asleep in a bra. (All those solid metal and plastic parts in bras...) 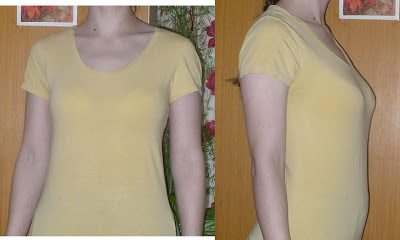 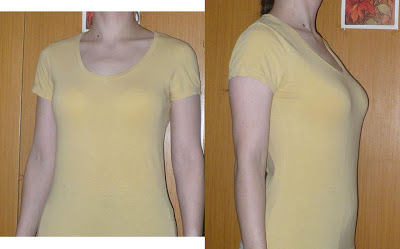 I don't know, there's something pleasanter about this look, even if it's just undergarments and a Frankensteined one at that: 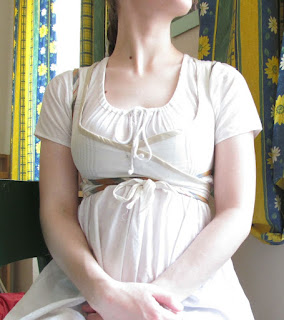 Must be the clingy T-shirt as opposed to nice drape-y woven.

Oh, and it's not just a UFO FO-ing project, it's also a scrapbusting, stashbusting project. Namely, the binding. I had to start somewhere.

The Challenge: HSF's #2 UFO + The Stashbusting Sewalong's January Itty Bitty Pieces theme, but finished after the deadline for the former and posted much later due to lack of good photographing weather and laziness on my part.

Pattern: Made by me, very wrong


How historically accurate is it? I'd say... about 10%. Totally winged, mostly machine-sewn.

Hours to complete: No idea whatsoever.

First worn: Dabblingly probably in January, but the full, heavy-duty wearing occured this month, at home. Not worn out yet.


Total cost: Most of it was ancient stash = zero cost; the spool of thread was about 40 CZK, I think.

Behind the Scenes: Star Trek Original Series - The Trouble with Tribbles. I've decided that Kuusi is a Tribble in cat form. This photo was taken around the time it was finished. He is bigger now. 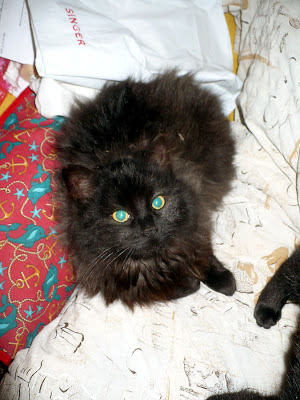 My options for cording the stays proper: A twisted cotton cord, too thick and likely to unravel. A thin (baker's twine thickness) linen cord, probably too thin. I have a haunting feeling that I must have got another idea at some point and forgotten it again.
My unfortunate jumps prototype got lucky.

And I really, really want to make this dress one day: 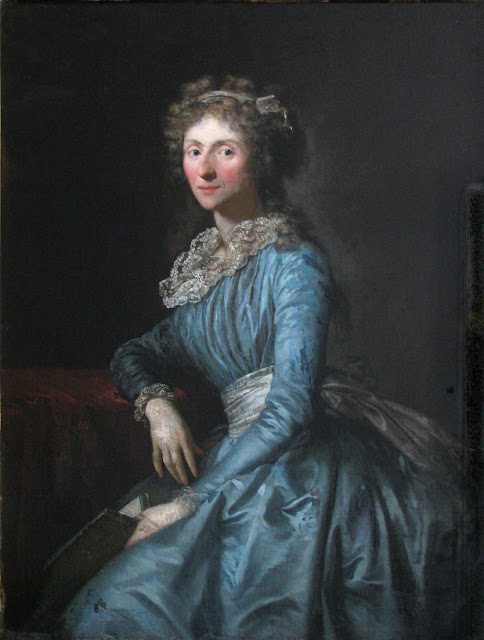 Portrait of Anna Maria Frederike von Taube, lady in waiting to Dorothea von Medem, by Anton Graff, 1780s, currently exhibited in the Rundāle Palace, Latvia. Photo taken by my father and edited out by me. (That dark rectangular shade at the right was the shadow of an infoboard or something.)
Now uploaded to Wikipmedia Commons as well. I asked father to take a photo of it with his better camera because I liked the dress; it turned out to be a painting by a famous author not published anywhere online yet. She is a mystery lady.

I think she's wearing something like jumps. Or could be.
Vystavil Hana - Marmota v 08:00